Ramayana is True; Why History Needs to be Rewritten to Fill the Missing Gap 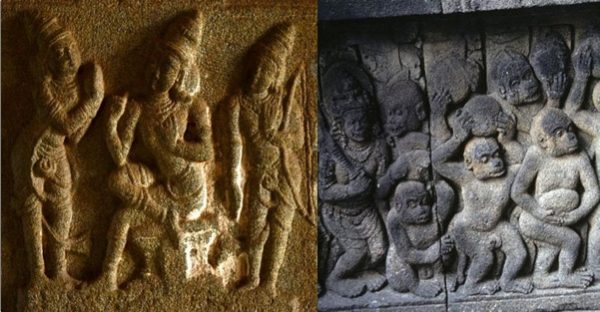 This is the proverbial proverb, from the West. This is a small part of a huge servile system that we Indians have been unmindfully following since British times, unaware of our own heritage and ancient Indian’s mindboggling advances made in science and technology. By now we Indians ought to have coined our own saying like, ‘See Belur and die’ or See ‘Ellora and die’ but unfortunately till date we are following the same ‘Venice’ example.

Since from our childhood, we have been hearing of Belur (Chenna Kesava Temple), Halebeedu (Hoysaleswara Temple) Ellora, Ajantha, Konark but have failed to look deeper inside this wonderful architecture, with a critical acclaim. This extraordinary architecture was hailed by International historians but yet they had to limit their accolades to the skills of the sculptors within the shrunk historical circa. They failed to see beyond. However, today, some excitement is building up about these wonder architects, as more and more secrets are being unraveled. As a result, Indians have started looking into these wonderful carvings afresh and have started probing the creator’s real capabilities and the advances in technology they made in thousands of years ago. Pleasingly, the recent Science Channel’s revelations on India’s Adam’s bridge (Rama Sethu) that is linking India and Sri Lanka has certainly excited Indians further.

I had been to Belur, Halebeed in Karnataka, Tanjore Big Temple in Tamil Nadu and Konark in Orissa. This may be my second visit in 30 yrs, yet I felt as if I am looking into these phenomenal architecture first time because this time I have examined these carvings with a fresh vision. Fresh and unbiased but with a critical eye, spending 5 hours at Belur and Halebeed each. It was marvelous, incredible, astonishing. Stones were carved into finest details as if this hardest stone, the Granite, were first turned into a soft limestone and only then they could carve out the whole temple. The countless numbers of statutes are not just an ornamental repetition, but each and every statue is unique and tells a story independently and collectively too.

Beautiful, expressive smiling women with mesmerizing hairstyles, sparkling eyes smiling at you as if its a living angel.

The Goddesses were adorned with gold ornaments which were carved out with finest details, unbelievable designs, wearing transparent midis (yes midis), high heel footwears, watching themselves at a handheld mirror demonstrating to the world that eve’s fashion is much older in India and in fact, the eve of India, a thousand years ago, were pathfinders to the modern world’s fashion.

Belur is not merely a 12th Century temple, but the fashion show that has been exhibited around the temple will take our memories back to Harappan and Mohenjodaro. I carefully examined half of the statues and models. What I found was startling. There are Indian faces, faces from north of Vindhya, South of Vindhya, western India, Eastern India, hold on, yes there are also faces from Europe, Africa, China, Mangol. Unbelievable? Does this show that the Indians had an International connection say, thousand years ago? Or this different racial profiling of humans does represent the Mahabharata time, rather than a contemporary International connection?

There is one, that looks like an Egyptian. Yes probably, but the guide behind me was telling his school children that the statue represents a ‘Judge’! wow! There are many statuettes with a helmet like headgear, and the stunning aspect of this what I noticed was the helmet has a transparent face shield too. Unbelievable? But true. The pillars were carved with circular plates and were remarkably polished. The stone cutting, rock cutting, stone polishing, carving technologies were superb and our modern time machine, drilling, polishing technology are no match.

Hold on. Some more. There are optical illusions. For Indians it’s not new and its part of thousands of years legend. Yes, you close one part and you see an elephant and close another part you can see a Bull. Wait Some more in store. Inside Belur temple, there is a pillar called ‘Nrusimha Sthambha’. This is a stunner. This pillar is filled with beautiful ornamental carvings with minute details. It is astonishing to think about what tools they did use, and how their hands could reach inside, that is a 6″ space? Alas as if not enough, look at the ceiling. An ornate circular ceiling filled with stunning intricate carvings in circles. At the centre, a small cylindrical structure, projecting downward. The diameter of this would be approximately equivalent to our ceiling fan canopy. On this small face, there is a stunning carving, depicting ‘Nrusimhavatara” There is no end to my excitement.

The Ramayana and the Apes

1) The Ramayana and Mahabharata are not just myths. There is no logical reason to believe them as an imaginary story. The chroniclers had a style of recording the historical events then. This style and some part of exaggeration need not lead us to the conclusion that its a myth. It is full of historical events recorded in a storytelling fashion. In the Ramayana, there is a flying dragon, that is Jhatayu’. Dragons were referred in all ancient texts of the Asian world.  The Kishkinda, the Apes Kingdom was historically and anthropologically a recorded fact. So, this Apes Kingdom will take the Ramayana time nearly back to 40,000 to 1,00,000 BCE. Any fantasy writer really wishes to bring fantasy to his story, would have naturally brought strange animals into his story but not mindfully the Apes, unless it was in existence and truly behaving on par with humans. This one evidence suffices to take back the Ramayana nearly 50,000 yrs BCE, that coincides with the recent Science Channels scientific findings.

2) Another far-fetched aspect of our scientific division of human evolution is Paleolithic era (Old Stone Age) and Neolithic era (New Stone Age). The former lasted 2.6 million years to 10,000 years. The later 10,000 yrs to 2000 yrs. This means human evolution took 26 Lakh years, but intelligence developed just in the span of 10,000 years. This is where the doubt arises. It is questionable indeed.

3) Recent enthusiastic researchers have come up with an answer for this ancient humans advancement and mindboggling structures they created. It is their association with visiting Aliens. At the outset, they are dubbing the 1000 yr old Indians who created the Big Temple in Tanjore, Konark in Orissa, Belur, Halebeed and Shravan Belagola are primitive and suggesting that they could achieve this unbelievable construction to their association with the then visiting ancient Aliens. This theory implies, that while visiting aliens were constructing these marvels, the native primitive humans were watching in awe.

The Aliens theory is not sustainable for the simple fact that space travel against the time and space was an impossible task. To travel by crossing interstellar space of light years distance is obstinate. The only possible Alien origin could be our own Mars. This is because of its nearest position to Earth. Then, however, according to one theory by Dr John Brandenburg, life came to an end on Mars, nearly half a billion years ago, by a nuclear attack on Mars by some Aliens. Half a Billion years ago, according to our own researchers, Earth was just a dead rocks. So nothing matches.

The only plausible theory to answer these puzzles is the very land of our Aryavartha, and it’s incredible age. This land is the origin of human intelligence, which fact is perfectly tallying with the timing of our Epics and detailed Geographical description of this subcontinent that can be found in our Puranas.

There is a puzzling missing gap in our History

This fear is lingering in our minds since ages. The western Indologists were basically from the Abrahamic background. For them, Jesus Christ is the cradle of their genealogy, irrespective of the credential of Jesus Christ’s historicity So they could not imagine a well-advanced nation like India in the East, with a 10,000 yrs rich heritage, and willingly or otherwise, they had placed our Vedic period just a 1500 yrs before Christ. This has compressed the vast period of Vedic history to a few thousand years. I really don’t know the credibility of the ‘Phantom Time Hypothesis, but surely a similar onslaught must have inflicted on Indian Sub Continent History, especially after the advent of Britishers. The early Christian Missionaries had a hand in this ‘Phantom Time Hypothesis’ like-conspiracy in order to impart credibility to the existence of Jesus Christ and Christianity, which was till date denied by their own western historians.

Late P N Oak’s findings may have been rubbished aside by Indian Leftists and liberal media and dubbed his findings are part of a Hindu superstition, yet his findings were very close to the truth and cogent too. Christianity is nothing but a phrase that was derived from Hindu ‘Krishna Neethi’, and the very name ‘Christ’ was derived from ‘Krishna’. The present Gregorian Calendar which is the official calendar of this age had a clear shift of Sanskrit months mispronounced and placing December (Dasa> 10th month at 12th position and started the year with January after Jesus Christ’s assumed birthday). For Hindus, the year begins with spring and nothing to do with Jesus’ birthday. So December is the 10th month, November (Nauv) being 9th month, October (ashta)  being 8th month, but somehow it all changed as part of a master conspiracy in the west in 16th Century, which gave birth to the Gregorian Calendar.

So we need to come out of this false pupa, in which we have locked ourselves for a long time, to discover our heritage and supremacy without any fear by shunning repressed mentality. This renaissance is need of the hour as otherwise, we will be doing a grave injustice to the mankind and insulting the study of every branch of human sciences, and will live forever in a misleading world.

Even some hardcore Leftist Intellectuals agree that the Epic Ramayana is nothing but a story of the ‘man’.

This article was first published in myvoice.opindia.com.