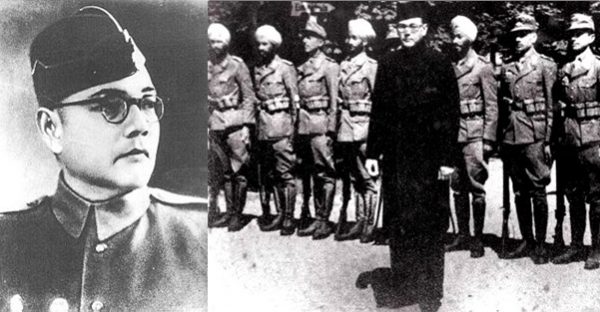 India Gate is a memorial to 70,000 soldiers of the Indian Army. The inscription of names of 13,300 soldiers including few soldiers and officers from the United Kingdom speak volume about the valor and courage of the warriors. The memorial is an ode to our soldiers who died on duty in the period 1914–21 in the First World War in several regions across the world.

As per the INA’s official history, the INA force had a total strength of 60,000. Of these, 26,000 were killed in action. They fought for the freedom of the country and sacrificed their lives in battle. Why is there no memorial for the 26,000 INA soldiers? It is an irony that they have a memorial in Singapore and not in India!

The Rajpath (‘King’s Way’) and surrounding area features India’s important buildings. This is the place where the annual Republic Day parade takes place on 26 January. Statues of Indian personalities from the freedom movement dot the area, enhancing the splendor of this part of the capital city. But why is there no statue of Netaji Bose at Rajpath?

Netaji Bose and his Azad Hind Fauz (INA) was the primary catalyst that inspired the military revolts of 1946 that ultimately forced the British to quit. The truth about Netaji Bose and the sacrifices he made for India have been wiped out from History.

In the words of Maj. Gen. GD Bakshi, “India got her freedom primarily because of Netaji and the INA. The Quit India moment of Congress in 1942 had FAILED dismally. So why is this fact not in our history Books? Why is there no statue of Netaji on Rajpath – no memorial to 26,000 INA soldiers who laid down their lives to free India?” 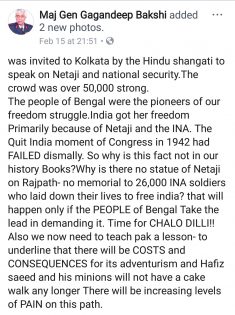 A succession of court historians have tried to craft a narrative that India had obtained her freedom entirely by the soft power of ahimsa (non-violence) and Satyagraha; and that hard power had no role to play whatsoever. Netaji Bose embarked on death defying journeys across the treacherous mountains of Afghanistan, threatening waves of Atlantic and Indian Oceans, and the tortuous jungles of Burma for India’s freedom. He managed to raise a huge army of 60,000 soldiers in a foreign land! It was on 21 October 1943 that Netaji Bose announced the establishment of the Provisional Government of Free India or Azad Hind. He underwent big hardships to create his army. Many Indians donated huge amount of money for the formation of the Azad Hind Fauz and themselves became part of the army.

Besides, uprisings against the British across the length of India from time to time had demoralized the spirit of the British. Who isn’t familiar with the sacrifices of Bhagat Singh, Rajguru, Sukhdev, and many freedom fighters from across the country? So why credit India’s freedom entirely to the soft power of ahimsa (non-violence)?

Do you know the INA veterans were not taken back into the Army (on Mountbatten’s advice) and denied their war time pensions? Any nation that seeks to gloss over the martyrdom of 26,000 of its soldiers erodes the very basis of its nationhood. Moreover the Nehru govt. treated these men as traitors!

It is time we revive the ardent nationalism of Netaji Bose. The government should not only build a statue of Netaji Bose on Rajpath but also build a memorial of the 26,000 INA soldiers who sacrificed their lives for Mother India. Jai Hind!