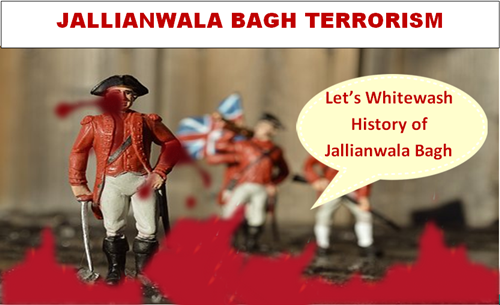 The world knows how the British monarchy brags about its colonial history. The people of Britain are made to believe that they were the most superior beings ever born on the land England. However, as per the Islamic accounts, European history is a complete fakery. Islamic accounts throw light that Europeans were originally captives of the Arabian empire and were brutally tortured in their slave trade during the 15th century. Admiralty records show that the British sailors were completely under threat of the Arabic raiders who captured around 500 British vessels between 1609 and 1616, around the same time when British approached India for help and shelter. 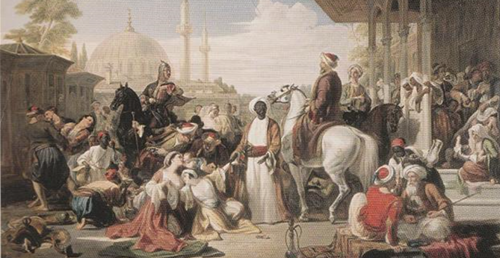 It was only after British were sheltered by India when they got astonished to see how wealthy, rich and yet ethical and spiritual the holy land of India was – ‘The Golden Bird’ full of treasures both material and spiritual. It was then that the British intentions changed overnight and they planned to stay in India forever – that is when they began the entire propaganda of founding a new history for themselves. Gradually, they began to conspire against India by creating an army of all British and created a new chapter of ‘loot’ and they started to loot India in the name of help and support. The loot reached a point where they became wild beasts attacking Indians in order to destroy Indian culture and its royal history. During that time, a chapter in the history of India that can never ever be forgotten appeared i.e. Jallianwala Bagh terror attack by the Brits. The insanity of such ungrateful state of Britain continued throughout – until they divided Bharat / India into parts and created a new country called ‘Pakistan’- which was created for Britain’s own benefits and with the intent to wash away their barbarous acts that they exercised during their entire stay in India and to forge historic records.

Post which they started to re write a fabricated history for themselves and are continuing with claims that hold no truth!

How can claims from such a state hold credible which has a big question mark on the credibility of its own history? That’s why when questioned on Jallianwala Bagh terror attack, the British government goes absconding and Britain sponsored propagandists come up with new lame stories every now and then.

This fake story propagated in Daily Times (Pakistan) is really a question in itself as to why the fabrication originated through a Pakistani news source. This also indicates the Pakistani connections of Britain. Moreover, any new made-up Jallianwala Bagh story coming from any source like this one is a mere blotted plot of swindlers since the original story is reserved by the eye witnesses in Amritsar only. Hence any new turn regarding Jallianwala Bagh would not be tolerated in any case as such stuff is merely a propaganda coming from the pseudo monarchs of Britain. Moreover, the history recorded or written by defaulters and their supporters would be outrightly rejected. Following is a snapshot from the fake news media. 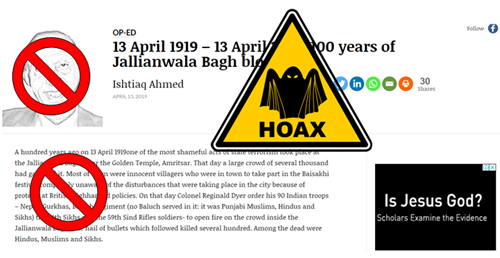 The historic records and demographic details are still being distorted since 1919. It is really ironic that the records of an attack that took place 100 years back are still being continuously forged because nothing seems to convincingly cover up this heinous act of crime. Fake new stories that are surfacing that include ‘Indians killed Indians in Jallianwala Bagh’, ‘No woman was killed during the attack’ and ‘People were holding peaceful protest’ are a shame on the entire humanity! Many women, men, old and young had gathered to celebrate Baisakhi who were ruthlessly murdered by the British monsters. It is a shame to falsely term a festive get-together and celebration of an occasion a peaceful protest.

Many mainstream historians are either pressurized or paid to publish pseudo-historic write ups on the basis of bogus records, pseudo- scientific reports and non-reliable British accounts written by swindlers of the past. The real incident is detailed as below:

1. Around 1000 women, infants, children, old and men were killed in the terror attack

2. No Indian was present in the terror group led by Dyer!

3. People had gathered there for annual celebrations of Baisakhi as usual

4. No protest in any form was being held in Jallianwalla Bagh!

5. No lathi was held by any Indian since it was a festive gathering and not a protest!

6. Many women jumped off into the well to save their self esteem to escape groping and manhandling by British men

8. The intention behind the brutality was to terrorize common people

9. Mentally ill characterless Britons also stripped off the clothes of people who were killed

10. This was a planned attack to establish a new loot on the resources and enormous reserves of Golden Temple which is in close proximity to Jallianwala Bagh.

Ever since the British pseudo monarchs and state have been sponsoring fake history write ups and stories in collaboration with their all time partner Pakistan which was intentionally created by them back in 1947 for covering up their own past heinous acts of crime and terror and to get rid of their terror tagged image and Barbary coast history! UK intentionally created a line of control to include a large portion of the oldest civilization in Pakistan so that it could later distort records and history of this civilization. Regiment records and demographic information and records were deliberately distorted and forged to turn historic records in Britain’s favour. Similarly, Britons then had intents to create line of control to include the Jallianwala Bagh site on the other side so as to completely wash away their wildly acts that made innocent yet great and courageous Indians suffer – thanks to the locals who didn’t let this happen and ensured that Britons’ so called strategy gets failed miserably. This is why India to date has a LIVE evidence of British brutality – ‘The Jallianwala Bagh’.

Sam Anand is an academician, curator and socialist. And is a reviewer of historical evidences, researches and press articles.