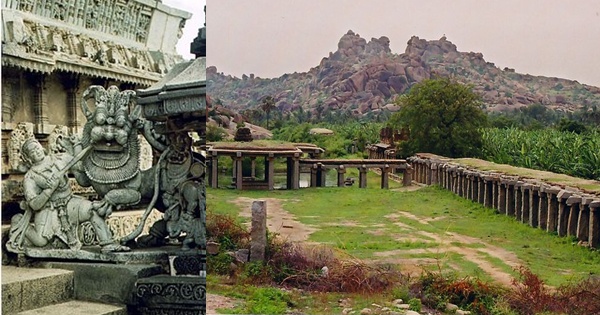 How did Hoysala kingdom come to its end? The “Beginning of Hoysalas” in the form of “sala story” is widely circulated, but their end is not so discussed. It is a horrible account and Indian historians have skillfully masked it from public account. The event was so horrible that it gave rise to the new kingdom of Vijaynagar, immediately in revenge.

The “real story” is documented in a Portuguese account in a book A Forgotten Empire: – Vijaynagar. It is made accessible to public from a library in UTTAH, USA.

‘In 1334, Sultan Muhammad (Muhammad Taghlaq) marched southwards against his rebel nephew, Baha-ud-din Gushtasp, who had fled to the protection of the “Rai of Kambila,” or “Kampila” as Firishtah calls the place, in his stronghold amongst the mountains. The title “Rai” unmistakably points to the Kanarese country, where the form “Raya” is used for “Rajah;” while in “Kambila” or “Kampila” we recognise the old town of Kampli, a fortified place about eight miles east of Anegundi, which was the citadel of the predecessors of the kings of Vijayanagar.’

Ibn Batuta goes on to say that ‘the Raya sent his guest (Baha-ud-din) safely away to a neighboring chief, probably the Hoysala Ballala, king of Dvarasamudra in Maisur, then residing at Tanur. He (Raya) caused a huge fire to be lit on which his wives and the wives of his nobles, ministers, and principal men immolated themselves, and this done he sallied forth with his followers to meet the invaders, and was slain. The town was taken, “and eleven sons of the Rai were made prisoners and carried to the Sultan, who made them all Mussalmans.”’

[Note the predecessor of Vijaynagar (Called Rai/Raya), a chieftain of Hoysala Empire had to burn their women before going to war. We hear only about Rani Padmavathi, but we are ignorant of our Kannadiga women who met the same fate].

After the capture of the fortress, the Sultan, according to Ibn Batuta, pursued Baha-ud-din southwards and arrived near the city of the prince (Hoysala Ballala) with whom he had taken refuge. The chief abandoned his guest to the tender mercies of the tyrant, by whom he was condemned to a death of fiendish barbarity.

“The Sultan ordered the prisoner to be taken to the women his relations, and these insulted him and spat upon him. Then he ordered him to be skinned alive, and as his skin was torn off his flesh was cooked with rice. Some was sent to his children and his wife, and the remainder was put into a great dish and given to the elephants to eat, but they would not touch it. The Sultan ordered his skin to be stuffed with straw, to be placed along with the remains of Bahadur Bura and to be exhibited through the country.”

[This is the punishment meted to the king’s own nephew. Karnataka experienced ISIS brutalities]

“After the capture of Anegundi in 1334 the Sultan left Malik Naib as his local governor, and retired northwards. The country rose against the usurpers, and after a time the Sultan restored the principality to the Hindus, but made a new departure by raising to be Raya the former chief minister Deva Raya, called “Deorao”. He reigned seven years. During his reign this chief was one day hunting amongst the mountains south of the river when a hare, instead of fleeing from his dogs, flew at them and bit them. The king, astonished at this marvel, was returning homewards lost in meditation, when he met on the river-bank the sage Madhavacharya, surnamed VIDYARANYA or “Forest of Learning,” who advised the chief to found a city on the spot. “And so the king did, and on that very day began work on his houses, and he enclosed the city round about; and that done, he left Nagumdym, and soon filled the new city with people. And he gave it the name VYDIAJUNA, for so the hermit called himself who had bidden him construct it.”

Thus, in or about the year A.D. 1336, sprung into existence the great city which afterwards became so magnificent and of such wide-spread fame.

A variant of this relates that the two brothers for some reason fled direct from Warangal to Anegundi. This account redounds more to their honour as Hindus. Though compelled first to accept service under their conquerors, their patriotism triumphed in the end, and they abandoned the flesh pots of Egypt to throw in their luck with their co-religionists.

According to another account, the two brothers were officers in the service of the Muhammadan governor of Warangal subsequent to its first capture in 1309. They were dispatched against the Hoysala Ballala sovereign in the expedition under the command of Malik Kafur in 1310, which resulted in the capture of the Hindu capital, Dvarasamudra; but the portion of the force to which the brothers belonged suffered a defeat, and they fled to the mountainous tract near Anegundi. Here they met the holy Madhava, who was living the life of a recluse, and by his aid they established the kingdom and capital city.

A fourth story avers that the hermit Madhava himself founded the city after the discovery of a hidden treasure, ruled over it himself, and left it after his death to a Kuruba family who established the first regular dynasty.

[There are various stories regarding the origin of Hakka and Bukka. Most probably they were the 2 out of the 11 captured princes and converted to Islam. After conversion they were forced to reside in Warrangal. They escaped to return back to Hinduism. Sage Vidyaranya helped them to “re-convert” and gave the required sanity. To hide this unpleasant account of converting to Muslim religion, stories were flouted regarding the family of origin of Hakka and Bukka. In most probability, they were descendents of “Rai/Raya” who were feudatories of the Hoysala Ballalas. Without this connection, it was difficult to assemble soldiers of the lost kingdom of Hoysalas. As they were seeking revenge against northern Sultans, revolted public supported them. The required “Trust” was catalyzed by sage Vidyaranya.]

2. Indian account on the birth of Vijayanagaram
3. Mudiraja Community, which claim inheritance from “Kapila Raya” have documented the references available in many documents.
4. Kumararama story that lives on in folklore and literary works.