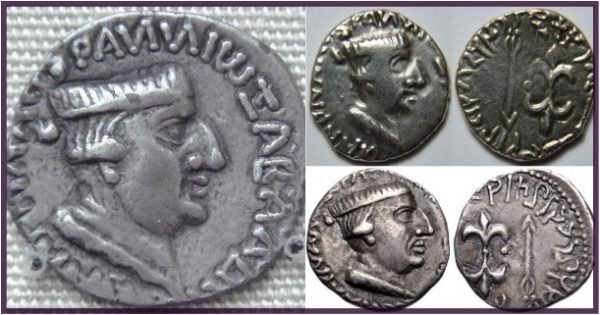 The epigraphic and numismatic evidence clearly indicates that there were two branches of Western Kshatraps. Bhumaka and Nahapana belonged to a different branch (Kshaharatas) from the branch of Chashtana (Kardamakas). According to Historians, both the branches were contemporaries. Chashtana branch reigned around 78-395 CE whereas Bhumaka and Nahapana reigned around 100-124 CE.

Though historians fixed the date of Bhumaka and Nahapana yet they failed to explain how Nahapana was ruling from Gujarat to Ujjain to Nasik when Chashtana and his descendants were ruling in the same region at the same time. 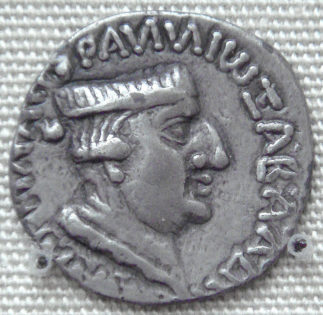 Tiloyapannati clearly mentions that one Saka king ruled 461 or 466 years after Mahavira nirvana and another Saka king started ruling 605 years and 5 months after nirvana who also founded an era.

It appears that there is an error of 127 years in the chronology given in the Harivamsa Purana and Tiloyapannati. The timelines of Saka kings given in Tiloyapannati contradict with the duration of the kings mentioned. Therefore, Meruttunga corrected this error and gives the chronology of 470 years starting from Mahavira nirvana.

A silver drachma of Nahapana. Rev: An arrow to the left and a lightning to the right. Legend in kharoshthi on the left: Rano Chaharatasa Nahapanasa. Brahmi legend on the right: Rajna Kshaha (ratasa Nahapanasa). Image and coin info source: Wikimedia (uploaded by Classical Numismatic Group, Inc)

Since Harivamsa and Tiloyapannati are more ancient texts than that of Meruttunga, we may have to place Naravahana or Nahapana just before Chashtana. The Palaeography also suggests that Nahapana must be placed before the beginning of the reign of Chashtana i.e. 583 BCE. Thus we can fix the date of Kshaharata, Bhumaka and Nahapana around 623-583 BCE. 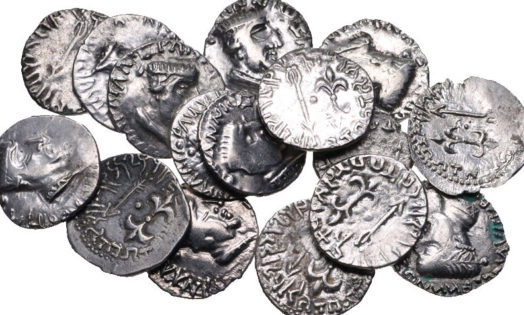 Interestingly, a coin of Bhumaka was found in Sharjah, UAE. A legend “Abhiraka” on the coin of Kshaharata indicates that Kshaharata belonged to Abhira tribe of Indo-Scythians. Puranas also mention that Abhira kings ruled for 60 Years. Some of the coins of Nahapana were restruck by the Shatavahana king Gautamiputra Shatakarni.