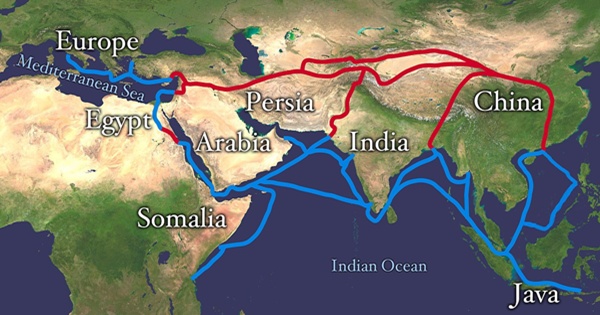 What prompted me to write this is a twitter post by discredited former IPS officer Sanjiv Bhatt (he was removed from service in 2015) and the response to it from True Indology, one of the foremost history handles on the micro-blogging site.

Bhatt, a leading light of the ‘liberal’ brigade regurgitated what he like many of us learned from school textbooks drawn up by the Left distortions. “Incidentally, Sher Shah Suri built the 2500 km Grand Trunk Road without inauguration!”, he wrote on his timeline.

His attempt evidently was to mock Prime Minister Narendra Modi who inaugurated the first phase of the 14-lane Eastern Peripheral Expressway connecting Delhi to Meerut. A major infrastructure achievement, the road has started showing its magic as media reports said that one-third of the 1.5 lakh trucks passing through Delhi had been diverted through this road within the first few days of its opening saving the national capital from traffic congestion and pollution.

But as expected, this has not gone down well with the liberals. 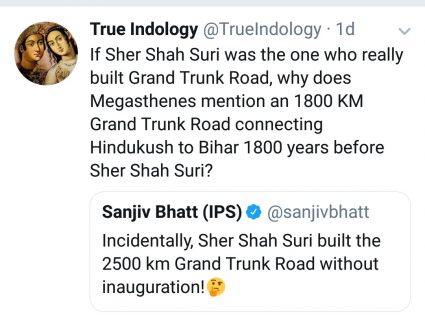 Bhatt’s tweet drew a sharp response from True Indology which wrote “If Sher Shah Suri was the one who really built Grand Trunk Road, why does Megasthanes mention an 1800 Km road connecting Hindukush to Bihar 1800 yrs before Sher Shah Suri? ”

True Indology was referring to the book Indica written by Megasthenes (see pic below), the Greek ambassador who was sent to the Mauryan Court. The book is a complete account of all that he observed in the then India. 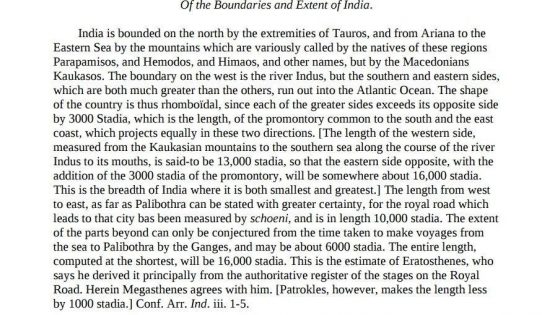 Quote from 300 BC book Indica – “India is bounded on the north by the extremities of Taurus, and from Ariana to the Eastern Sea by the mountains which are variously called by the natives of these regions Parapamisos, and Hemodos, and Himaos, and other names, but by the Macedonians Kaukasos. The boundary on the west is the river Indus, but the southern and eastern sides, which are both much greater than the others, run out into the Atlantic Ocean. The shape of the country is thus rhomboidal, since each of the greater sides exceeds its opposite side by 3000 Stadia, which is the length, of the promontory common to the south and the east coast, which projects equally in these two directions. [The length of the western side, measured from the Kaukasian mountains to the southern sea along the course of the river Indus to its mouths, is said-to be 13,000 stadia, so that the eastern side opposite, with the addition of the 3000 stadia of the promontory, will be somewhere about 16,000 stadia. This is the breadth of India where it is both smallest and greatest.]”

“ The length from west to east, as far as Palibothra can be stated with greater certainty, for the royal road which leads to that city has been measured by schoeni, and is in length 10,000 stadia. The extent of the parts beyond can only be conjectured from the time taken to make voyages from the sea to Palibothra by the Ganges, and may be about 6000 stadia. The entire length, computed at the shortest, will be 16,000 stadia. This is the estimate of Eratosthenes, who says he derived it principally from the authoritative register of the stages on the Royal Road.”

In short, what True Indology tells us is that the road already existed many centuries before Sher Shah Suri. 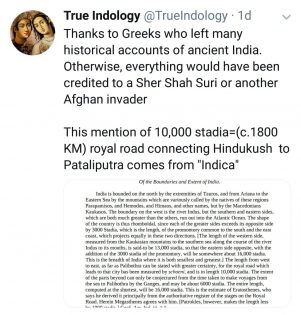 The reply prompted me to think about how generations of Indians have been forced to approach History, thanks to the comrades.

We were taught in school about Sher Shah Suri, an Afghan warrior who defeated the Mughals and captured Delhi’s throne for a short period of time. He is touted as an able administrator and eulogised by these history texts. It’s possible that given the strategic importance of the road extending along the northern plains, and which later came to be known as the Grand Trunk (GT) Road, he too had tried to maintain it. However, that does not make him the one who constructed it.

True to what True Indology pointed out, records also attest that the GT Road predates even the time of Shri Gautama Buddha. It was known as Uthara Patha (Northern highway) in the ancient times. The northern high road was the main trade route along the River Ganga, starting from Tamralipti in the east, running through Punjab to Takshashila and further to Bactria (Central Asia).

During the Mauryan period, Uthara Patha was the nerve centre of overland trade between India and the Hellenistic world.

Contemporary accounts detail the extent of resources Chandragupta Maurya spent for the maintenance of the highway.

Given its strategic importance, every ruler maintained the Uthara Patha. Shershah must also have maintained it for which our leftist historians decided to give him credit for building it though plenty of sources were available to prove the existence of a Grand highway from around more than 2000 years.

This debate is proof that we have to unlearn a lot of the history that we mugged up in school if we want to really know the real history of India. We have to take all that we were taught with a pinch of salt and start reading authentic sources to set the record straight.

Anjali George is a learner and cultural enthusiast who worships and cherishes the great civilization of Bharat.