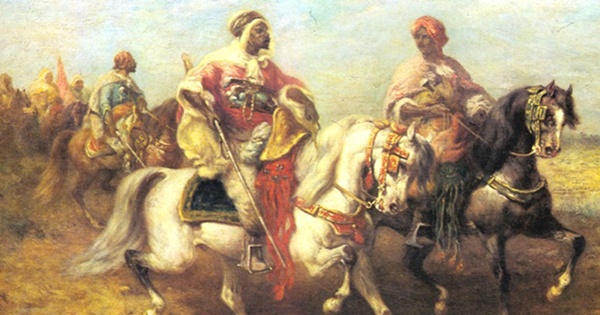 Indica is the book written by Megasthenese, the Greek ambassador to India around 300 BC. The book is lost, but various other authors quote his book . Another book with the same name, Indica by Arrian survives. Note the book is written as a military journal to know the country. 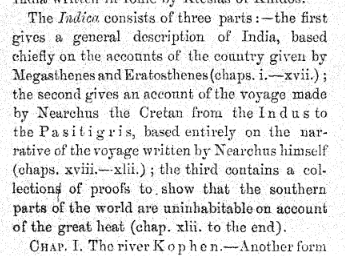 Nearchus documents as follows. He says “Arabii” is an Indian tribe. It is derived from the river “Arabis”. 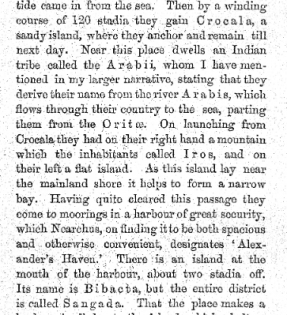 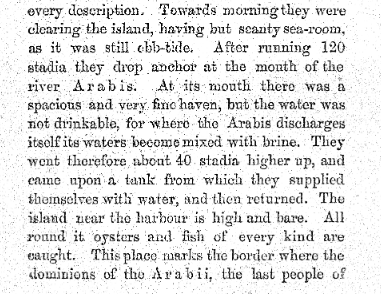 The Crocola is identified as “Karachi”.

And river Arabis is Purali.

The Bay of Sonmiyani is still identified as “Sonmiani Bay” in Pakistan maps. It is near Balakot. 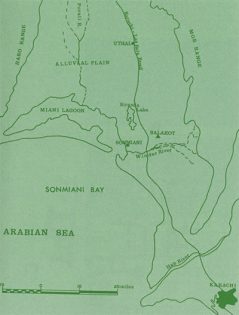 Britishers identify this area as “Belujistan” and document the area between river Habb and river Purali. Both Habb and Purali are identified and “Purali” is rightfully identified as ancient “Arabis”. Purali river is a minor river now. Such minor river’s name being used to identify the “sea” (as Arabian sea) and a land as “Arabia” generates key questions.

Probably in ancient time (of river Saraswati), this river Arabis must also be big.  The tributaries of Arabis, could have shifted to river “Sindhu” (like tributaries of Sarawati shifting to Yamuna and Ganges due to platonic shift in Himalayas). This should have reduced the river to a minor river status today. Only a roaring big river could contribute its name to “Arabian Sea”. It is strange, nobody talks about this mismatch!!

The above page is taken from the British Encyclopedia book, publication of 1845.

Naturally, The “Arabian sea” is derived due to this river. These Indian tribals must have gone and settled in “Arabia”, which are the  “Oil rich Arabian-kingdoms” today. See the map at Alexander’s time.

Nyasi region was after Arabii (Afghanistan of today). These Nyasians are also identified as Indian in origin.

Bacchus is equated with Shiva. River Cophen is Kabul river. The tribe of Nyasi is also identified as “Indian origin” and there is a talk of “Aryans migrating out of India”. How Britishers, conveniently lied.

Muslims in India and Pakistan think, “Arab race” is superior. But Megsthenese says, tribes west of Indus are inferior. 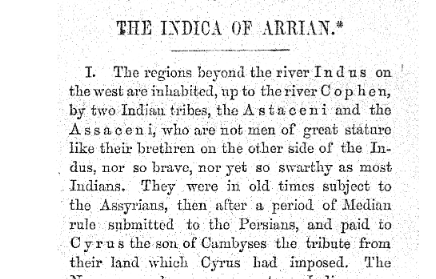 Proper India is identified by Greeks as follows:

The tribe “Arabii” or Arabs was in constant fight with “Persians” (The Iranians). The same continues today as Sunni (led by Arabia) and Shia (led by Iran/Persia). This is really a very very old conflict, even before the birth of Prophet Mohammed.

This story was first published at the author’s personal blog.