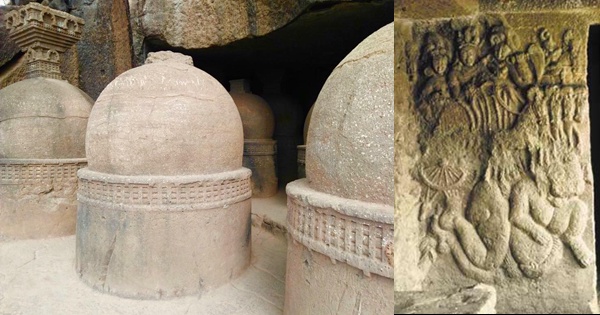 Yaksha : What is THE PATH?
Yudhisthira : Arguments lead to no certain conclusions. The Srutis are all different, one from the other. There is not even one Sage whose opinion can be accepted as infallible. The truth about religion and duty is hidden in the CAVES. Therefore, THAT alone is THE PATH along which the Great has trod.

These are large man made caves. Tons of excavated stones must have accumulated during the carving process which have vanished without leaving any trace!! We may not even speak of the tools used to carve out the temples and Viharas out of hard basalt rock.

Bhaje caves near Lonavala has a lot of mystery attached to it. The Bhaje rock cut cave temples are more than 2200 years old ( if not more, considering we have lost almost 1200 years in mere calculation mistake!!)

The facade is gone. In the midst of ruins stands these majestic 22 rock cut caves of Bhaje. Close your eyes and imagine a massive wooden facade covering the entrance of the largest cave which you are facing. For a while, visualize that the thick timber had exquisite well ventilated carvings all over the 40 ft height and 30 ft width (approx) structure while monks moved around in their maroon colored tricivara (triple robe) chanting the name of Buddha. 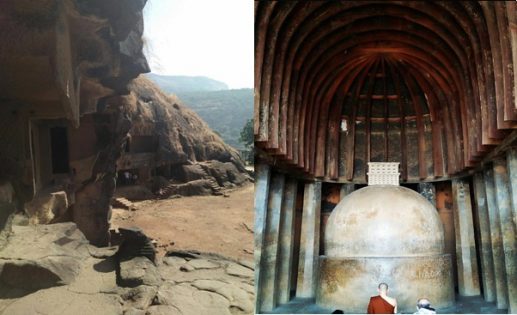 Behind the wooden facade is the prayer room with beautifully carved horse shoe shaped access on basalt rock. The Stupa stands at the end of the Chaitya Hall and is overlooked by 27 octagonal pillars. The ceiling is vaulted and original wooden beams are fixed. Look around and perceive a majestic multi storied structure with verandas and stairs exhibited all over. Beautiful massive carvings hanging all over the rock cave!

The large horseshoe shaped entrance is now completely exposed with broken remains as the wooden facade is missing and the wooden ribbed Chaitya stares straight at you. This ancient multi storied rock cut cave temples with Viharas must have been visited by many. What’s hidden for centuries, the stones knows all!!

Within few yards, on the right of the Chaitya hall is a very strange spot. There are fourteen rock cut Stupas of various sizes in a cluster. Five inside the cave while nine outside. This is undoubtedly a bewildering experience. You will swerve through the irregularly yet very closely positioned Stupas, each exquisitely carved out from basalt rock with elegant relic boxes and capitals.

Some Stupas have names of “Sthaviras” inscribed on them. The “Sthaviras” are elderly monks or older and more orthodox disciples of Buddha. These Stupas are believed to have relics or remains of these extremely revered monks. Fourteen Stupas of “Sthaviras” at one site is very rare indeed!! A sense of ancientness engulfs you when you realize that you are surrounded by 2000 year old souls. My fingers constantly touched the Stupas, very gently, as I walked around them, experiencing ancient holy blessings!!

Bhaje caves definitely belonged to the “Sthaviras” while the nearby Karla rock cut cave temples were of the “Mahasamghikas”. A rivalry of these two Buddhist sects during the Ashoka period is well recorded in our history. So there were two religious power houses within a short distance. The tension can be envisaged!! 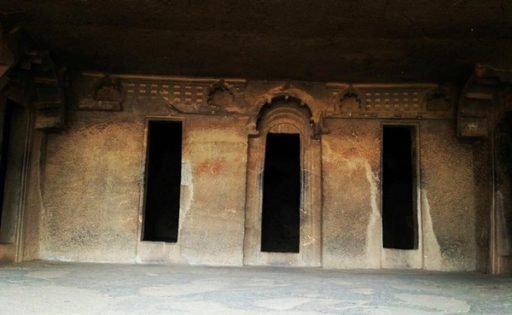 Bhaje caves and Karla caves both thrived simultaneously around 3rd century BCE till 5th Century AD probably with a constant difference of opinion between the two Buddhist sects. The possibility of a few centuries of turbulent time within this 8 km radius cannot be ruled out!! Only the stones know it all!!

What purpose were the cave temples carved out along the important trading route (via Sapora Port) of Western India? Did the traders use these temples as solely learning centers? Could these be prestigious seats of religious programs attended by very famous scholars around India and outside? What if they act as banks & vaults for traders en route? May be they also acted as centers of guilds for business and trade under Ashoka? A perfect location for the “unknown nine” of King Ashoka?

Whatever the rock cut cave temples were meant to be in addition to preaching Lord Buddha’s teachings, they were carved out with a well worked out design. The ample water collection chambers below the temple floor needs special mention. Hope someday someone goes inside these subterranean chambers and have a closer look at them!! There is an altar like structure in one of the Viharas which had an unimpressively carved Shiva Linga. Seems as if the Shiva Linga was carved out later. Beautifully carved ventilators and rock carved rope tying devices on the walls is worth a mention. A very unusual shaped door, and many more.

One of the Viharas in particular had two distinctive squarish opening connecting to the next room and the hall at the floor level. What could be the exact purpose of these connecting duct like opening at the floor level in such small rooms in addition to doors? Very intriguing indeed! 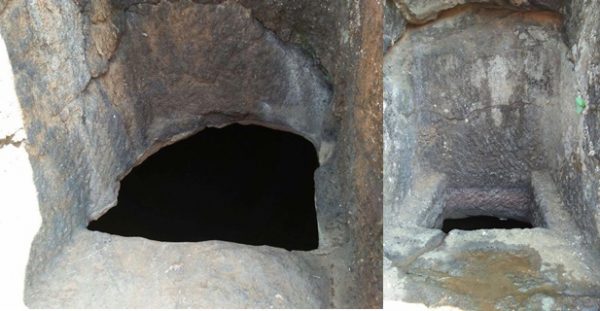 Cave 18 has a fleeting mention in Archaeologist James Burgess’s report during his visit to Bhaje caves in 1880. This particular cave was getting cleared of the debris and yet to be excavated when he reached Cave 18. Hence he must have not paid much attention to it.

It’s a Vihara with a difference. Once you cross the series of octagonal pillared entrance you step into a small exquisitely carved hall with a room in the right and a sitting arrangement in the left. A trunk like altar sits in the middle just below a full sized carving of a noble man with an extraordinarily large bow!! 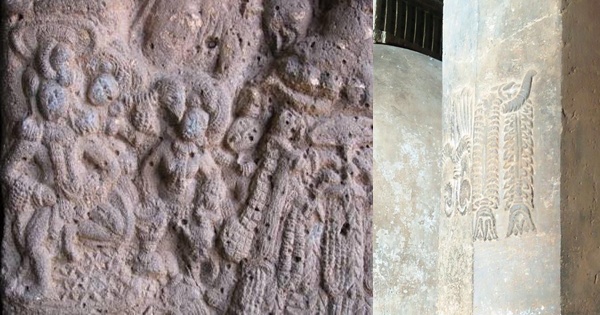 What’s mystifying are the carvings on the wall and the fact that we don’t know anything about them!! Who are these figures carved out? What’s the story of the individuals elegantly dressed like a king with bow and spheres? A complete episode is carved out with various personalities and events on the left parapet and right side walls with chariot and elephants.

There is a demon, attendants, queens, kings, women soldiers in horseback, an unusual dome like structure, elephant uprooting a tree, dancing girl with scorpion sting shoes, cattle and many more. All these, and not a single relevance to our known history!! 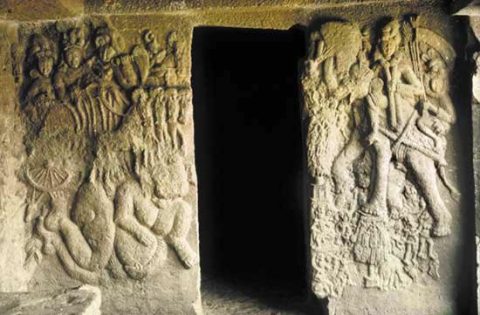 Can you imagine that till today nobody knows in certainty who are these individuals depicted in the carvings of these rock cut cave temples!! There are claims that these two carvings are of Surya in a chariot and Indra in elephant but without any certain explanation.

Alternately there is a theory that the central figure carved out is of Emperor Mandhata of Ishvaku and Koli clan on whose name was the city of Mohenjodaro. Again without any confirmation. Frustrating yet enthralling. Imagine a chapter of history missing completely!!!

The ceiling is definitely worth a mention with 7 stupas overlooking the hall. The small hall opens into a beautifully carved out bigger hall with rooms. For some strange reason there are wooden doors with strong iron bars placed to seal the hall!!

Cave 18 could be anything from a monastery to library or a temple or even a secret vault for sacred scriptures with some extraordinary revelation to our country’s history (which definitely is invisible at the moment). The unknown figures could be some untold kings of the past with a connection to the Buddhist caves. May be guarding some deep secrets of the caves and our history!!