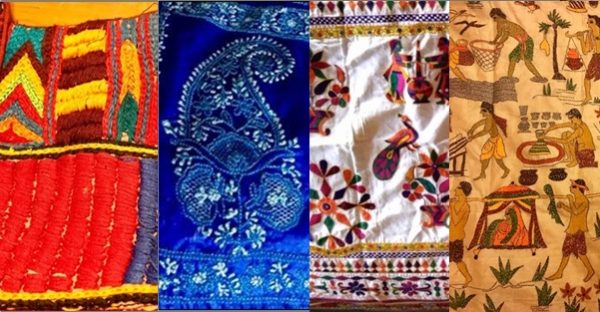 India has an extremely rich tradition of embroidery and every region has its own specialities. Here are some Indian embroidery types from my own curated collection chosen carefully over the years.

Aari work is mainly practised in Kashmir. It involves a series of stitches done by a special needle with a hook. The needle is operated from one side of the fabric stretched taut on a frame and the thread is passed from the other side. 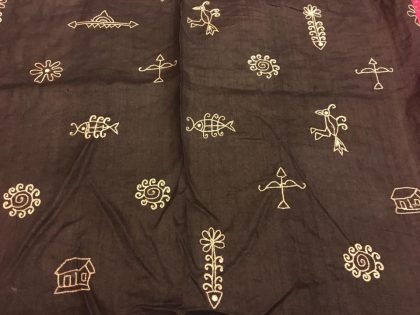 The continuous movement of the needle creates a line of chain stitches which are used to create several motifs like flowers, animal and human figures and geometric designs. The size of the hook determines the size of the stitches.

Done by the women from the nomadic Lamani or Banjara tribes scattered all over India. The embroidery involves extensive use of mirrors, bead work and coins, attached to the fabric using various stitches.

Mainly practised in the city of Lucknow, the term Chikankari comes from the word ‘chakeen’, a Persian word for elegant. Kamaladevi Chattopadhyay attributed the origin of Chikankari to Noor Jahan. Traditionally Chikankari involved the use of white thread on white cloth.

But now coloured textiles as well as coloured threads are used extensively. Some of the stitches that are used in Chikankari work include: tepchi, bakhia or shadow work, murri or embossed work and jaal, where a net like effect is created in the fabric by taking out threads by careful counting.

This is mainly found in Rajasthan where thin ribbons in gold and other colours are appliquéd on to the fabric to create elaborate patterns. 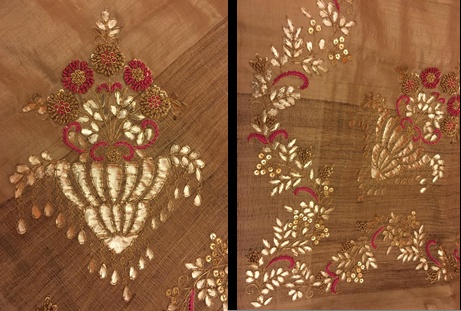 Gota-Patti work is often used in combination with other types of embroidery like zardozi to produce the desired effect. Leheriya and Bandhej sarees are often embellished with this kind of work.

Everyone knows about Kantha work from Bengal, where a simple running stitch is used densely to create intricate motifs that include geometric patterns, animal and human figures, mythological stories and motifs from nature.

The origins of Kantha work are very humble though. It was used as a recycling technique to quilt together pieces of old, worn out clothes. However, now it has become an art form in itself.

Kasuti is a embroidery technique from North Karnataka. The name comes from the Kannada words Kai and Suti, meaning hand and thread. Kasuti is always done with a single thread and traditionally, involves counting threads in the cloth. Expertly done Kasuti looks exactly the same on both sides and is done without tying a knot to the thread.

Typical Kasuti patterns involve a lot of Hindu iconography like temple gopurams, palanquins, lamps, elephants, peacocks etc. There is a version of Kasuti called the Negi, where the motifs look like they are woven into the fabric. Kasuti was traditionally done on Ilkal sarees and KhuN blouse fabrics. It is also knows as Karnataki Kashida.

Sozni is an extremely intricate embroidery done using a thin, long needle in Kashmir. What is unusual is the fact that traditionally this form of embroidery was done by men.

Variations of this embroidery include jaama, where the whole fabric is covered with embroidery without leaving any gap and Jaal which is a mesh like pattern done using vines and flowers. Motifs used are floral, geometric, paisley and the local plants of Kashmir.

Phulkari is the embroidery from Punjab, which literally means flower work. Bagh phulkari is where the base fabric is fully covered in geometric patterns in bright coloured threads leaving no gaps. The design is embroidered on the cloth from the reverse side of the fabric. Stitching is usually done with brightly coloured silk thread.

Kathi is the form of embroidery practised in Gujarat. Mostly done on a white or off white base, the embroidery involves chain stitch and herringbone stitch enhanced with mirror work. 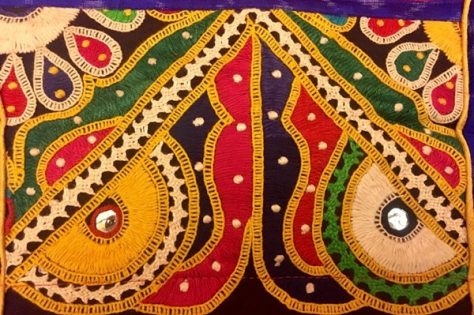 Many of the kathi embroidery motifs depict Hindu themes and symbols sacred to the Hindus, like parrot, elephant, peacock. 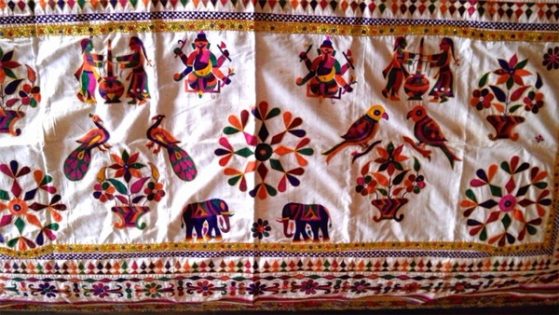 Suf embroidery is an art mainly practised in Kutch region. It is a complicated type of counted thread embroidery where the patterns are created by making stitches over carefully counted number of threads in the material on which embroidery is done. 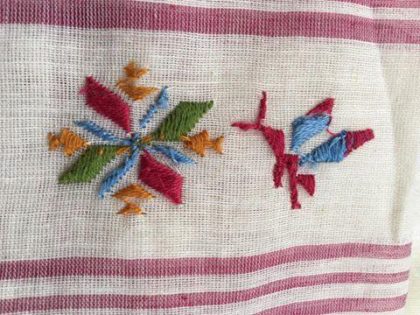 Patterns are very precise and geometric and symmetrical and motifs are embroidered using a triangle or ‘suf’ as the basic motif. 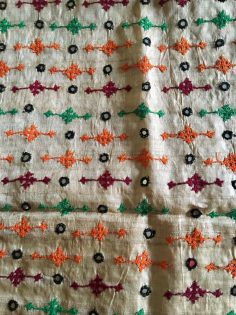 Parsi embroidered Gara or a saree is famous for its densely embroidered motifs. Parsi embroidery draws its inspiration from Chinese embroidery on silk fabric and uses motifs like the cypress tree and the famous chakla chakli (opposing birds), lotus, birds of paradise and various vines and creepers. 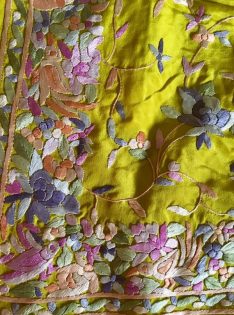 Unlike the Indian penchant for brighter colours, the threads used in Parsi embroidery are usually in pastel shades.