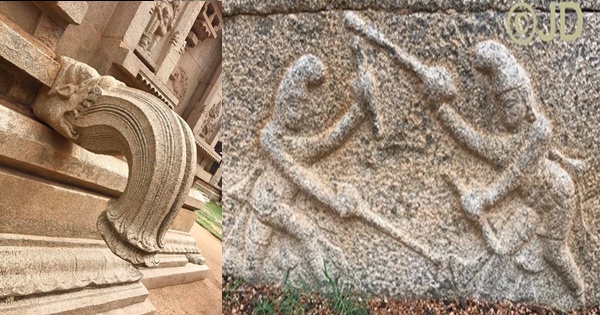 “Amidst numerous ruins in Hampi there are many secrets yet to be decoded”.

Every temple in Hampi had a separate market. Perhaps every market was a specialty. Like modern day malls with exclusive products Hampi possibly was one big city with numerous markets, each market with specialised products and overlooking each market was a temple. A temple and its market was an integral part of Hampi’s social life.

Established by the brothers Harihara and Bukkaraya I in the 14th century, the mighty Vijaynagara Dynasty was at pinnacle during the reign of Krishnadevaraya (1509-30). Vijayanagara was an amalgamation of three dynastic families – Sangama dynasty, Tuluva dynasty and Araveedu dynasty.

Each carving and architecture of the temples of Hampi has a story to tell. Lying on a sandy ground like fallen heroes, just in front of the hugely fortified stone walls at the Royal enclosure are two extraordinary granite doors. The pivot shafts and the door bolt cavities are clearly visible even today. These monolithic doors were a part of the entrance to the incredible Mahanavami Dibba Platform inside the Royal enclosure. 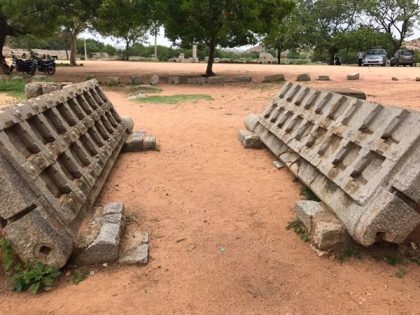 One of the most fascinating pillars at Vitthala temple, Hampi is a carving closely resembling a Sumo wrestler or a lawn Bowler. This 15th century temple complex represents many Asian characters in addition to countless Middle Eastern/Central Asian figurines proving that Hampi had an excellent trade and cultural relationship with outside world.

While bowling has a long history from the Egyptian and Roman era, the modern day Sumo wrestling in Japan was completely different than its original format till the 16th century. Sumo was considered as a ritual dance at many Japanese shrines and not a true wrestling. During Sumo ritual dance, the performer had to wrestle with an invisible Kami (spirit). Kamis were spirits of nature and were worshipped. They were invisible to human realm and inhabited sacred places. They represented forces of nature, elements of landscape and were considered to be spirits of ancient clans. They were invoked to participate during rituals. 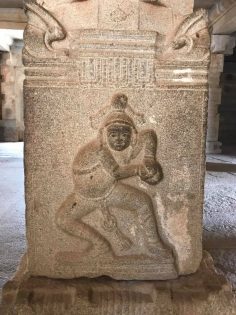 Kamis were extraordinary beings, they had two distinct traits. They could protect and love when respected but could cause major destruction and disharmony when disregarded. Possibly the Vijayanagara Kings invited special Sumo wrestlers to take blessing and protection of Kamis of ancient India, which is evident from these temple carvings. Yet, something definitely went wrong at Hampi which resulted in the collapse of such a magnificent empire!!

Whether this particular carving represents a Sumo wrestler fighting an invisible Kami or a sportsmen bowling down a clay lane to hit the targets. Hampi was undoubtedly a multi cultural hot spot visited by people from far away countries, especially during the Mahanavami festival. 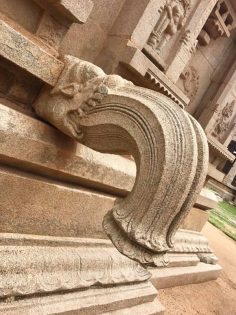 Truly remarkable precision in sculpting, a granite water outlet spout is beautifully chiseled with striking accuracy at Hazara Rama temple, Hampi. Dedicated to Lord Rama, this 15th century temple at Hampi has numerous mind blowing sculptures all around the temple.

One of the inner mandapa pillars at the 15th century Vittala temple, Hampi, has this beautiful carving that illustrates Mother Yashoda churning butter while little Krishna playfully touches the vessel.

The pageantry of Janamasthami was visible during the 15th century at Hampi and many centuries before, all over India in various temple carvings. It’s celebrated today, and will continue to be celebrated across India in many centuries to come!! 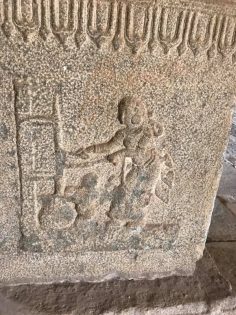 Almost overlooking the Virupaksha temple at Hampi and situated on the slope of rocky Hemakuta hill is the magnificent Kadalekalu Ganesha Vigraha. It is on this hill Lord Shiva married a local girl Pampa (daughter of Brahma) while Gods showered gold from heaven. This granite hill was covered completely by gold and thus got its name Hemakuta or golden peak (Hema is gold in Sanskrit & Kuta is peak).

This remarkable 15th feet Ganesha Vigraha is carved out of a large monolithic granite block during the 14th century and Ganesha’s belly resembles Bengal gram (Kadalekalu in Kannada). The temple was built around the inner sanctum of Ganesha Vigraha with many beautifully carved pillars. 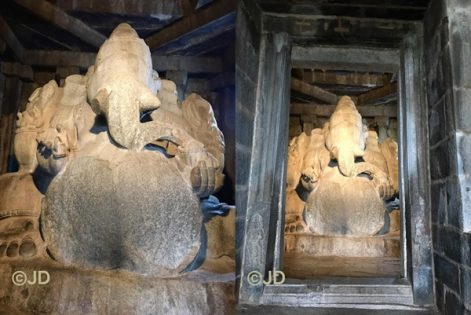 There is a very interesting stone carving depicting martial art at the base of the outer wall of the Zanana Complex which included the treasury and queens palace. This block of stone is positioned for some strange (or deliberate) reason at the bottom corner of the huge boundary wall and sits at a right angle to another block with carving of two wrestlers. At the inner side of the boundary wall is one of the watch towers. So the other side of granite block is the base wall of the watch tower.

The ground level granite block illustrating a particular form of martial art is very intriguing. It probably represents two South East Asian sword fighter engaged in dual wielding swords. One of the sword looks like a KRIS and the other a dagger or even a Barong knife. While KRIS has a history connected to India, it is a sword believed to have supernatural powers and was used in Indonesia, Thailand, Malaysia and Philippines. The depiction could also be of Kalaripayattu (Indian martial art). 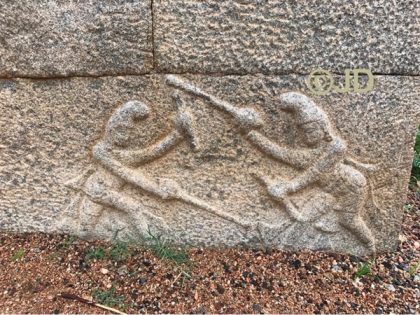 whatever the form of martial art, the characters represented in the stone block is definitely from South East or Far East. With numerous carvings at Hampi showing Asian figures, there is no doubt that Vijayanagara kingdom had a strong alliance with Asian countries.

While one more large block on the fortification, above the carving of wrestlers is of a bird and a fish, again reason unknown. Could definitely interest the treasure hunters!! 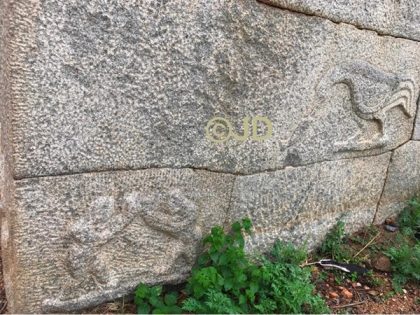 Hampi is definitely a must visit!