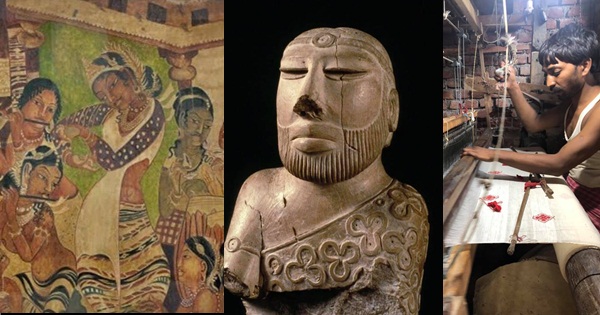 Handwoven textiles are the original Make In India product. The handloom sector employs the second largest no of people in India after agriculture, in weaving as well as in ancillary activities like dyeing, spinning, setting up the loom, starching etc.

Our ancestors from the Sindhu-Saraswati civilzation had mastered the art of weaving. A madder-dyed scrap of fabric found at Mohenjo-Dado proves that our people knew the art of growing cotton, spinning yarn, weaving cloth as well as dyeing yarn using natural colours almost 5000 years ago! 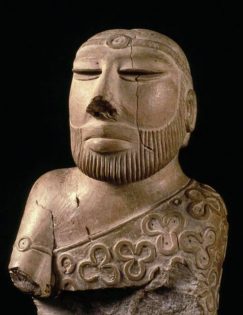 Even the famous priest-King statuette found at Mohenjo-Dado shows the figure of an aristocratic looking man draped with a shawl on one shoulder. The shawl is embossed with a tre-foil design, proof that not only did our ancestors knew weaving and dyeing, they had also mastered the art of block printing. 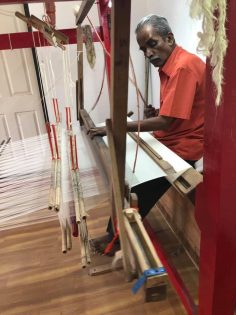 Indian textiles were exported to Rome and Greece via the port of Lothal located in present day Gujarat, as well as by land. In fact, ancient Romans used the word ‘Corbasina’ for cotton, which is derived from Sanskrit ‘Karpasa’. Herodotus describes Indian handwoven textiles as ‘exceeding in beauty and excellence’.

During the first century CE, Indian textiles were much coveted in the Roman Empire. They called Indian handwoven textiles ‘Nebula Ventalis’ (clouds woven from air), so finely were they woven. The Periplus of Erythrean Sea mention Indian textiles. In fact, Roman historian Pliny Jr even expressed concern over the flight of Roman money to India and recommended ban on the import of textiles from India! 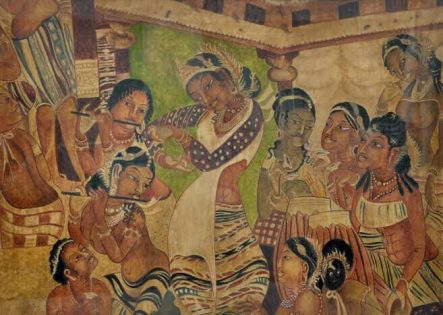 Ajanta cave paintings dating back to 3rd cent BCE are a good way to appreciate the different weaving, block printing techniques and clothing styles prevalent in India more than 2000 years ago. We can see at least four hand-weaving and resist dyeing techniques that are still continuing in India, single Ikat, double Ikat, Jari brocade n jamdani. The pasapalli or checkerboard pattern in double Ikat that is seen on the Padmapani Buddha’s waist cloth is still being woven in Odisha even today!! 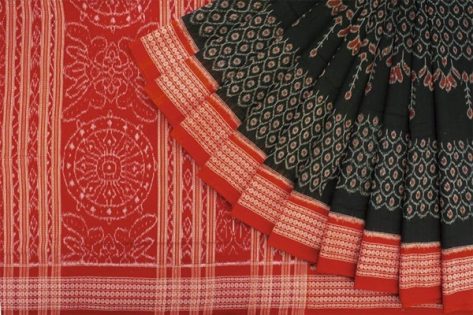 In Kautilya’s Arthashastra, there is a mention of Weavers Guilds. Ports like Cambay (Stambhatirtha) and Bharuch in Gujarat and Tamralipti on the Eastern coast of India were used to export woven cloth to both the East and the West. Marco Polo mentions the port of Cambay as a thriving port populated by merchants from all countries.

Today, the Indian handloom sector employs more than 40 lakh people. More than 80% looms are operated in rural areas. India is the second largest exporter of handloom products in the world, with exports valued at US$ 353.9 million in 2017-18. Almost 70 percent workforce employed by the handloom sector consists of women. 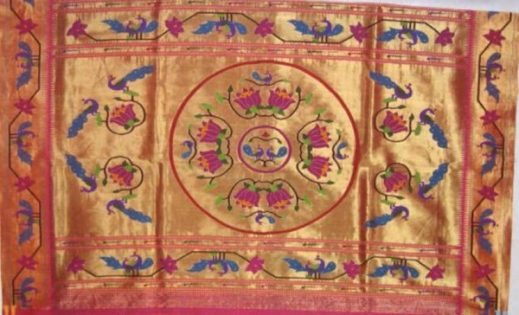 Even though India has been known for its handwoven products for centuries, the Indian Handloom Brand was inaugurated by PM Narendra Modi on the event of the First Handloom Day celebrated in India on 7th of August 2015. Handloom Mark was introduced to give the buyer guarantee that the product he/she is buying is genuinely hand-woven.

When we say Handlooms, most people think only of sarees, but hand weaving in India is not limited just to sarees. Everyday objects like towels, bed-linen, shirts, gamchas, dhoti, kurtas, dupattas, cushion covers, curtains are all hand woven. I request everyone to buy at least one handwoven article to encourage our weavers. 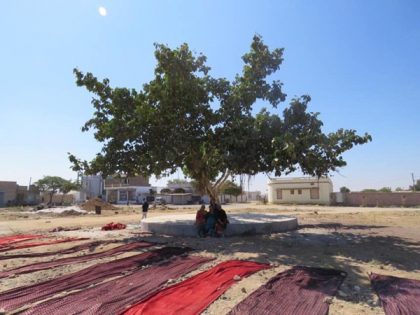 Handwoven textiles are sustainable, ecofriendly and generate employment for a lot of people. Right now this sector is facing tough competition from the powerloom sector and from unscrupulous vendors who sell powerloom products blithely by calling them Khadi or Handloom.

A fabric can be called ‘Khadi’ only if it woven from hand-spun yarn, and it can be called hand-woven only if it woven on a manual, non-electric loom. Next time, you buy a hand-woven product, make sure it has a handloom mark. For genuine hand-woven articles, best places to buy are government weaver co-ops like Co-optex, Boyanika and Tantuja. Delhi has a whole row of all state emporia on Baba Kharak Singh Marg, where you get exquisite hand-woven textiles.

Woven wonders of Chinnalapatti and Thirubhuvanam