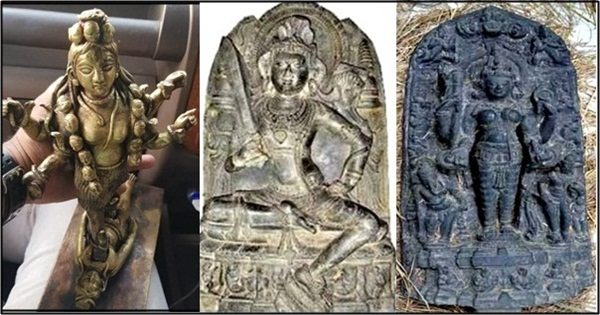 Indian civilization is the oldest surviving civilization in the world, dating back to thousands of years. While Western historians mark the Vedic calendar between 1500 to 500 BCE, inscriptions, archaeological excavations, Puranas, and various other literary evidences prove that the Vedic era started before 15000 BCE. Ironically, western historians have fixed our historical dates and to add to the confusion and distortion, this fake dating is further stamped as true by most Indian historians. It is time we come out of the false pupa infused on us by the Westerners, and rewrite our own true history and archaeological events. There were thousands of standing proofs of our ancient heritage in the form of temples and forts. From 8th century till British established their supremacy, Islamic plunderers and invaders destroyed thousands of our heritage structures – the living proofs of our past glory. They razed thousands of our ancient and medieval era temples to the ground and broke the idols of our deities. The British smuggled thousands of our artefacts. After Independence,  smuggling of Indian artefacts and idols of deities have become big business.

The illegal heritage trade in India is estimated at Rs 40,000 crore a year. According to a report by Singapore based Anuraag Saxena, who steers the India Pride Project involved in bringing back smuggled Indian artefacts to India, “UNESCO estimates that 50,000 idols and artefacts had been stolen out of India till 1989. Advocacy group Global Financial Integrity estimates that the illegal trade of arts and artefacts is worth Rs 40,000 crore a year. As an example, a single sandstone sculpture stolen from Madhya Pradesh was worth Rs 100 crore in the international market.” 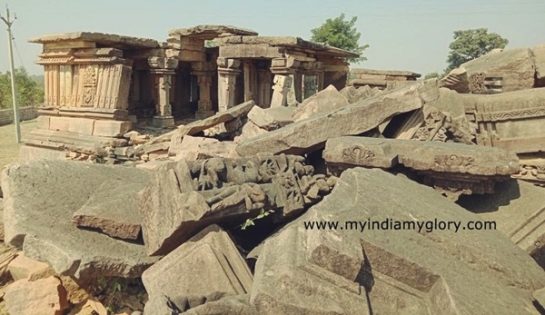 I and Yogaditya Singh Rawal have been visiting forts and fortresses, less explored ancient and medieval era temples across India since the last 10 plus years.  We came across many temple structures in ruins lying abandoned on the ground. The bits and parts of structures of the ruins of our past identity can be restored. Sadly such ruins are in abundance across the country. These require urgent attention or very soon there will be little trace left of our past glory. Amid the ruins lying on the ground, the structures that depict our deities, Gandharvas, Apsaras, etc. including other idols and artefacts are mostly missing. These must have been already stolen by heritage thieves and smuggled out of the country.

Timely action by police as well as local people of respective temple sites have led to foiling of many smuggling attempts pertaining to Indian artefacts dating back to ancient and medieval era. During one of the site visits by us, the husband-wife duo, we came across a Gupta era Varaha temple in Dewgarh, UP where the main idols in the garbhagriha is missing. Only the feet of Varaha and the Royal Nag and Nagin couple at the base remains. The statue originally exhibited Varaha lifting Prithvi on the left arm with right arm resting on thigh. On the left was Lakhsmi holding a lotus flower. Heritage thieves broke the Varaha statue to sell in the illegal heritage market few years back. As the statue was huge, they broke it into two parts. Later they were caught by the police and a case was registered against them. The statue remained in police custody till the case was dismissed. The thieves were jailed for a few years. The statue is now under protection at Dewgarh museum. 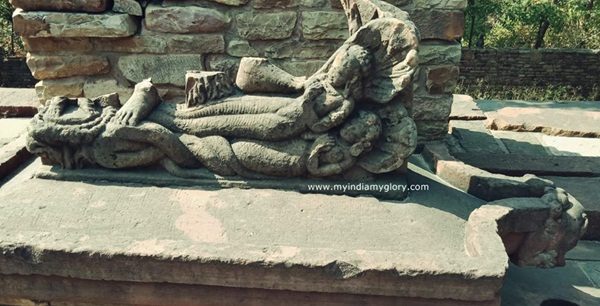 Broken parts of Varaha in the garbhagriha of the ancient Gupta era Varaha temple in Dewgarh, UP; image clicked by the author.

Western historians, as aforementioned, including few Indians have distorted the chronology of Indian historical events. So as per distorted historians, Gupta era that lasted for nearly 300 years is projected to be from 3rd to 6th century CE. But according to ‘Puranas’, inscriptions, and several Indian literary historical evidences, Gupta era was during the last 300 years of BCE. As per Vedveer Arya’s book Chronology of Ancient India, the Gupta era commenced from 335 BCE. This temple of Varaha is thus, at least 2000 years old.

On 23rd August 2020, the Commissionerate of Customs (Preventive), Kolkata seized 25 antique Moortis/sculptures/artefacts from a truck at South Dinajpur district. This truck was headed to Bangladesh through the Kaliyaganj border. The ancient Moortis and artefacts, found concealed in paddy, was valued at Rs 35.3 crore. 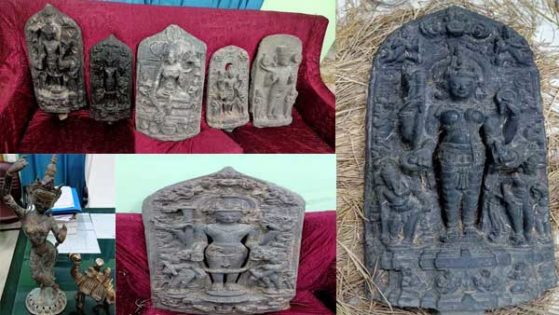 To quote DNA India, “Of the total 25 seized antique idols, there were seven stone idols of Goddess Parvati, Manasha Devi, Lord Vishnu and Lord Surya, seven metallic artefacts made of bronze and octo alloy used for casting metallic idols in Hindu and Jain temples besides 11 terracotta idols. All the seized antiques range from 9th century AD to 16th century AD.”

The idol of Ugratara, (a form of Goddess Shakti, related to navel of Sati of the 51 Shaktipeeths), believed to be 975 years old, was stolen from the Ugratara temple in post mid 2018. Ugratara temple is located at Uzan Bazar in Guwahati, Assam. This centuries-old idol was recovered six months later by the Golaghat police from Nalbari, around a 100 km away from the shrine. Five parts of the idol were missing. Four persons arrested in this case were Saan Hussain, Adil Ali, Rahul Ali and Mintu Roy. 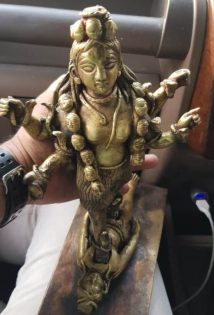 The Ugratara temple, dating back to several hundred years, was renovated by Ahom Raja Siva Singha in 1725 CE. It was further renovated by a private citizen after a earthquake destroyed parts of the temple.

According to a May 2019 report by The Hindu, the ASI identified several Indian artefacts seized from smuggler Subhash Kapoor. This smuggler, now extradited to India and currently in the custody of Tamil Nadu police, had smuggled numerous artefacts dating back from the Indus Valley civilization times to Gupta period and later period.  He had sold and gifted these to many museums across the world. These include bronze statues from the Suttamalli and Sripurantan temples of Tamil Nadu, artefacts from Karitalai of MP, 56 terracotta objects from Chandraketugarh in West Bengal and of Harappan culture, an idol of Mahakoka Devata, and more. As per the report by The Hindu, “The ASI said the team identified close to 100 objects in total, including 17 objects that had been seized by the department.” 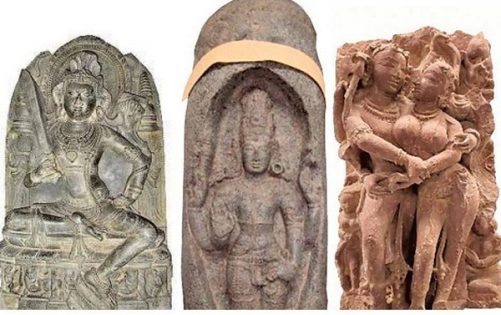 The ASI had been working in association with the consulate of respective countries to identify the smuggled Indian artefacts. The Hindu also reported about the ASI identifying “232 objects comprising of brass and copper alloys, gold with enamel work, silver, stone and terracotta…..Among them, few were identified as antiquities, like the stone image of the Buddha of Mathura School, a terracotta image of the Buddha belonging to the Gupta period…”

In February 2007, as per a report published by The Hindu, seven crates of several Chola era idols valued in multiple-millions of dollars, were seized by authorities in Mumbai. The consignment was heading to the US under the fake banner ‘marble garden table sets.’  A consignment, worth over $20 million, had already been sent earlier, which could be traced as a result of the bust. This also led to identifying the kingpin of the illegal heritage trade – Subhash Kapoor and his gang.

According to another report published by The Hindu, “the American authorities recovered stolen Indian art worth $100 million from his warehouses and galleries, and named him ‘one of the most prolific commodities smugglers in the world’….. Subhash Kapoor and Sanjeevi Asokan had been dealing in antiquities for decades before they were caught. The Suthamalli and Sripuranthan idols, which ultimately did them in, were just a drop in the ocean. Many, many more treasures had passed through their hands. So how come they never got caught all those years?” 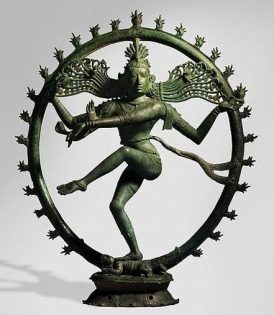 India Pride Project has been instrumental in bringing back home many Indian artefacts. One of the idols they brought was the centuries-old Nataraja statue which was stolen from Sripuranthan temple located on the banks of the river Kaveri. This temple, which is part of a huge temple-network built by the Cholas, was built by Rajaraja Chola. The Nataraja statue, valued at US$ 5 million (Rs 33 crores), was stolen in 2006. The smuggler had sold it to the National Museum of Australia (a government owned organisation).

Another idol India Pride Project traced and brought back to India was a 12th century bronze Buddha with silver inlay seated in the bhumisparsha mudra. This was stolen from the ASI museum in Nalanda in 1961 along with 13 more statues. A centuries old Chola era idol of Shiva embracing his consort Parvati, called the Alingana Murti, was brought back home to India by the same organization from the Ball State Museum as reported by Swarajya magazine. The team at India Pride Project have regular full-time jobs and they have been selflessly committed to the cause of bringing back to India not only smuggled Indian artefacts but also maps, manuscripts, paintings, etc. 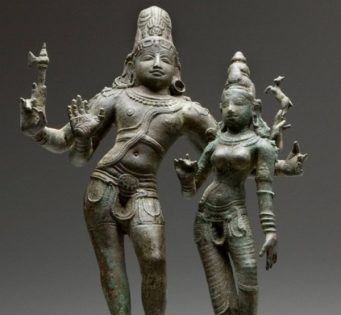 As per a report published by The Diplomat, ‘eight cases of antiquities theft were reported from State-protected monuments and museums across three states’ in 2014. These are reported cases. What about more heritage thefts across the country? What about the unreported cases? According to the same report by The Diplomat, “On his April sojourn to Canada this year, Prime Minister Narendra Modi was given the ‘Parrot Lady’, a 900-year-old sculpture from Khajuraho under the 1970 UNESCO Convention on the Means of Prohibiting and Preventing the Illicit Trafficking in Cultural Property. The $10 million piece had been smuggled from India.”

According to a 2002 report published by the Times of India, ‘the CBI had a case against Sonia Gandhi and her sister, allegedly involved in smuggling Chola period artifacts to Italy.’ Ramani’s blog describes thus, “On 1-8-02, smuggling of India’s antique artifacts by Sonia Gandhi was brought up in the Indian Parliament by a Samata Party member. Many Indians have visited Italy and had seen the shops owned by Sonia Gandhi, alias Edvige Antonia Albina Maino. This has never been a secret. There is an antique store called Ganapathi in Orbassano, Italy, Sonia’s native place. The shop is owned by her relatives. Her smuggling activities began during Indira Gandhi‘s premiership when Sonia was only Mrs Rajiv Gandhi.” Why doesn’t the media speak openly and expose Sonia Gandhi? 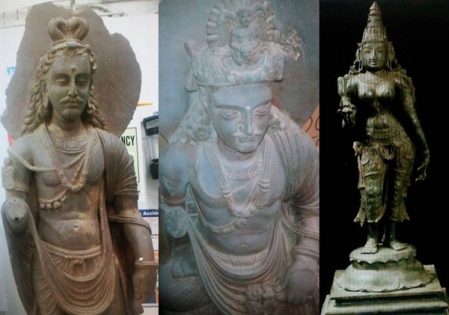 According to a latest report by PTI, four idols were stolen in the mid of August 2019 from Muthumariamman temple near Vedaranyam in Nagapattinam district. The idols were of Mariamman, Murugan, Valli and Deivannai. As er the report, “Of the four, the idol of Mariamman was made of panchaloha while the others were made of bronze, all between 2-foot and 3.5-foot high…” Were these idols stolen by purpose or for smuggling them into the illegal heritage trade market?

Despite the existence of The Antiquities and Art Treasures Act, 1972, the illegal trade of smuggling of Indian artefacts that includes stone sculptures, terracotta items, antique metals and jewelry, paintings, maps, manuscripts, etc. continues unabated. When will this illegal heritage trade stop? As long as laws aren’t strict and as long as power rests in the wrong hands, stopping this is an impossible affair.

Ref: Link of all references marked in bold italics. Part of the information is based on the author’s visit to historical sites.