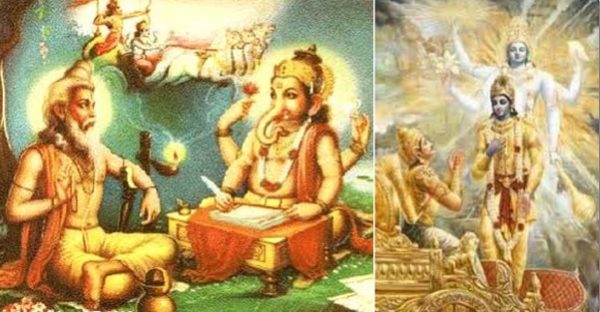 Why  Bhagavad Gita is the law book of Hindus (Sanatan Dharma) as per Veda Vyas (the compiler of Vedas).

The Vedas and Bhagavad Gita were spoken by Veda Vyas and recorded in written by Lord Ganesha more than five thousand years ago. Before that it was not in written form but in oral form. The people during that time were shrutidhar, which means that they could learn anything without mistake just by hearing once. 5,000 years ago when Dark Age of Kali Yuga started then as per Vedas it was mentioned that the need of writing Vedas was required. The knowledge of Vedas before that was spoken by Gurus to their disciples in Gurukuls (Hindu or Sanatan schools) as per ancient lineage of Guru-Disciple succession. This was done through Guru Shishya Parampara which meant only the disciple of Bonafide Guru Parampara could only become Guru (Teacher of spiritual and material knowledge).

Vyas Muni made Vedas recorded in written because he was aware of future Dark Age (Kali Yuga).  He knew that people in Kali Yuga would no longer be shrutidhar means they wouldnot be able to learn just by hearing once. Vedas exist from the time of creation.

It is mentioned in the Nyaya Shastra about how to study Vedas. Mimansa Shastra of Nyaya Branch explains that Vedas are in sequence. It tells that if there’s a rule mentioned anywhere in Vedas and if the rule told later contradict the rule told earlier then the later rule become powerful and relevant as compared to previous rule and should be considered instead of previous. Eg. like in primary school, students are taught that they can subtract smaller value number from Greater value number only and not the opposite. Whereas in higher standards the same students are taught that they can actually subtract Greater value number from Smaller value number also in the similar way but with only one difference that the value will be negative. Both are correct, but the later is complete and a stronger rule.

Similarly, Bhagavad Gita is the final end conclusion of Vedas. Krishna stopped time and spoke it beyond time and that’s why it is known as Brahma Vidya. As Atma (soul) is beyond time, so, Atma Gyan is also beyond time.

Bhagavad Gita 2.45 (Krishna to Arjuna)
त्रैगुण्यविषया वेदा निस्त्रैगुण्यो भवार्जुन |
निर्द्वन्द्वो नित्यसत्वस्थो निर्योगक्षेम आत्मवान् ||
TRANSLATION
The Vedas deal mainly with the subject of the three modes of material nature. O Arjuna, become transcendental to these three modes. Be free from all dualities and from all anxieties for gain and safety, and be established in the self (Atma or soul).

How to read Bhagavad Gita?
Bhagavad Gita is also known as Gitopanishad as per Vedas. Lord Krishna stopped time to speak Gita to Arjun. Bhagavad Gita is spoken by Lord Krishna the creator, who is Eternal, Beyond time showed his Universal form to Arjuna in Chapter 11 of Gita.
As per Ishopanishad,
ॐ पूर्णमदः पूर्णमिदं पूर्णात्पुर्णमुदच्यते
पूर्णस्य पूर्णमादाय पूर्णमेवावशिष्यते ॥
Translation:
Eternal (beyond time)  Brahman is Complete whole. Whatever comes from that Complete whole is also complete. If one takes out complete from that Complete still it remains complete.
Above verse explains the characteristics of Bhagwan or Brahman. As per Shankar, Bhagavad Gita is spoken by Bhagwan Shri Krishna, so it is ‘complete’ coming out from ‘complete’. “Bhagavad Gita needs no commentary to explain it. One verse (shloka) of Bhagavad Gita explains another verse”.

Why there are so many commentaries on Bhagavad Gita?
There are more than 4,000 commentaries on Bhagavad Gita. Many of them are by the Communist and foreign funded philosophers, who use their agenda to break India’s foundation base. They do so so that they can convert India into Communist, Christian or Muslim country. Also there are many so called Gurus who claim that one cannot know the supreme truth without our being in middle whereas real Gurus and masters just tell the correct way to study Gita as Shri Krishna told Arjuna i.e. One shloka of Gita explains other and it is complete truth coming out of complete. Fake or ignorant masters are blind leading blind and many of them are funded by foreigners from more than centuries.
Gita talks about:
1. Karma (righteous actions without attachment to result).
2. Dhyan (Art of controlling mind by focus and control of inner life force with easy and most effective techniques).
3. Gyan (being situated in knowledge all the time that “I am soul”).
4. Bhakti (devotion to supreme, becoming free from the shackles of false ego).
Like in a human body eyes, brain, stomach, heart, hands, legs, kidneys, etc. all the organs and limbs are important. Similarly to attain perfection, Karma, Dhyan, Gyan and Devotion all are important. Many times when a staunch Karma yogi writes a commentary on Bhagavad Gita he diminishes the importance of Dhyan Yoga, Gyan Yoga and Bhakti Yoga in order to present Karma Yoga to be supreme. Similar is the case with Gayan Yogi, Dhyan Yogi and Bhakti Yogi.
No one is qualified to write the commentary on Gita because no one is qualified to stop time. There is no need to explain which is already explained. Commentaries on Gita make make the simple and clear messages complicated and confusing.
“It is highly recommended to read only translations (word to word) and not the commentary”.

How much time is taken to read all the 700 shlokas in Bhagavad Gita?
It takes around 3 hrs to 5 hrs to read the translation of all the 700 shlokas. Take the one with word to word translation. If one is very slow reader then it might take 12 to 15 hrs. One may read one chapter every day by giving 15 mins to 30 mins everyday for 18 days as Gita has 18 chapters only. When one reads Bhagavad Gita for the second time then he or she reads the shlokas with the understanding of all the 700 shlokas.
It is said in the Mahabharat:
आहार निद्रा भय मैथुनं च
सामान्यमेतत् पशुभिर्नराणाम् ।
धर्मो हि तेषामधिको विशेष:
धर्मेण हीनाः पशुभिः समानाः ॥
Translation
Eating, sleeping, defending and mating is available in even animal life also but if one enquires about the truth (birth, old age, disease, death and Soul) then one is considered as human else one is simply a two legged polished animal.

What inspired author to write this article? What’s the need?
Sanatan or Hindu Dharma is the most scientific and clear religion. Author is not a born Hindu. He has personally studied nearly all the major religions unbiasedly to inquire the truth. But if one asks most of Hindus or Sanatanis – ‘which is the law book of Hindu or Sanatan Dharma’, they give all sorts of confused answers. Reason is that they answer without study. Those who are not clear of who they are then they are destined to be invaded and perish.
May Guru and Shri Krishna bless all

Data Science with Bhagawat Gita: For Building Intuition in Understanding