Art and Artists: Opening the Gates to the Supernatural Realm of the Devatas 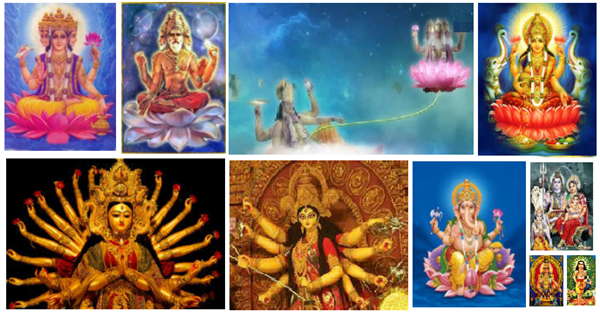 Since the time humanity developed a brain capable of sustaining thought-currents, or in other words developed the thinking ability and became ‘homo sapiens’ (thinking-humans), around 315,000 years ago, something magical is going on inside the human minds. They started seeing images and forms of ‘beings made of light’ or ‘the beings emitting light’ inside their minds. These beings sometimes tried to communicate with them using body-movement-signs or sound-utterances emerging from the throat. Behavioral modernity, involving the development of language, figurative art and early forms of religion arose among the humans since then and got fully shaped by around 40,000 years ago.  During this period, human minds developed words and symbols to articulate the nature of the divine forms appearing inside their mind and to share these among each other. It was the origin of cave art and other forms of creative expressions. It was also the origin of religions. Both art and religion originated together!

These prehistoric artists painted the divine forms emerging in their minds with strange features like with the head of a lion, an elephant, an ape, a horse, a bird and so on, but with a human body. At other times, they possessed wings like a bird or feet like a bird. Such forms are called Therianthropic forms. These artists who painted those on the walls of the caves were up for a big surprise! When they looked at each other’s drawings, paintings and artworks, they soon realized that the other artists were often seeing the same forms and entities! In other words, the artists were not drawing or painting the forms and entities purely from their random imaginations. They were seeing entities in their minds having an existence beyond their flickering random dreams and temporary imaginations but having an existence in the collective human consciousness. It was akin to a shared dream where the same entities, forms and actors interact with different artists, who connect with this ‘alternate reality’ through the medium of their dream or imagination.

If we bring this experience to the modern era, it is like multiple people watching the same movie or going through the same virtual-reality experience using their Virtual Reality headset. Such art works on the rocks and on the walls of caves, etc. are today explained away as the result of the influence of ancient-aliens who visited planet Earth or otherwise are attributed to the emergence of religious thought in human societies.

Soon different human communities, including the Vedic people who lived on the banks of the river Sarasvatī in India, developed methods so that a large number of people can together connect with these alternate-realities existing in the unknown ‘folds’ and ‘valleys’ of these Un-manifest Realms of Consciousness. Such methods involve,

(1) singing and dancing together in rhythm for long duration while listening to the mesmerizing tune of ancient drums and musical instruments producing psychedelic music,

Later, in a development unique to the Vedic people, quite unlike in other word-wide cultures, a  new technique called Yoga developed, enabling the mind to connect with these parallel realms of the altered state of consciousness and interact with its entities in a more structured and controlled manner. The word ‘Yoga’ is derived from the word ‘yuj’ meaning to connect, implying a connection with the parallel realities of the super-conscious realms and with the divine entities residing in them, accessible to the seeking minds. The Vedic Rshis perfected the system of Yoga and other systems of connecting with the parallel realms (ritual dancing, singing, heightened sexual activity and the use of psychedelic substances including Soma).

Until recently, the scientific community had only one theory regarding the idea of consciousness, mind and all kinds of mental phenomena. They thought that mind and consciousness and all the mental phenomena – like the thoughts, memories of past, speculations of future, imaginations, dreams, hallucinations, intuitions, logical reasoning, and arriving at conclusions – all of these – are the emergent property of the human brain. Like the individual motions of trillions of water molecules, each a particle, produces the phenomenon of water-flow, the phenomenon of mind emerges as the result of the firing of the trillions of neurons in the human brain. Human brain is thus the origin of Consciousness and the mind. When the brain is dead or damaged beyond repair, then the consciousness disappears. All the thoughts cease.

This theory gives explanation to medical phenomenon like the near-death-experience occurring when a person is in coma, about to die or when a patient’s brain is almost dead. At this time the brain is not supposed to produce any thoughts, imaginations or any other mental phenomenon if mind is an emergent property of the brain. But medical history reveals that many patients who miraculously recover from such vegetative states and come back to life, report vivid mental activity like thoughts, visions and images during their vegetative states. Some of these are the exactly same visions, same images of entities and same experiences (like passing through a tunnel of light in utter darkness and emerging into a new realm of reality) but reported by different people at different times and places. This theory gives explanations for phenomena like rebirth, multiple personality disorder, ‘seeing through the eye of the other’ and so on. It also explains the entities of parallel realms who are interacting with humanity since humans got a thinking brain, capable of connecting to the multiple realms of consciousness. Only in this theory we have explanation to the experience of the artists, both pre-historic and modern, who saw the divine entities in their mental eye and communicated them to the rest of the world through their art-work.

The Vedic Rshis used the term ‘Devata’ to denote the divine entities made of light or emitting light, where the root word ‘div’ means to shine, or to generate light.  The Rshis comprehend the Devatas in their mental eye and created hymns, forming the Vedas which we hear as the Sruti. The artists of today, bring those Devatas to the masses and the whole of humanity is then able to ‘see’ the Devatas using their ordinary eyes!! It is the artists in a society that are the originators of new traditions. If they so wish, they will bring a new religion all together!

It is through their mind, acting as the divine path, passing through the haze of the Un-manifest realms, that the Devatas travel and arrive at our world of ordinary perception. The Rshis like Bhrigu created the Puranic Trimurtis and the Dasavataaras through the power of Samkalpa and the thousands of modern artists brought them to the world of ordinary perception. The Samskrit term Samkalpa is the collective super-conscious expression of an idea or concept having a universal appeal, mistranslated to English as faith, belief or myth.

Who showed you the five and then four heads of Brahma as he looked at the four directions and then upwards? Who decided that Brahma has bearded face and who decided his face is beardless like a child, the eternal creator? Who showed you the emergence of Brahma through the naval of Vishnu? Who interpreted the Padmāsana of Lakshmi and Brahma as being seated on a lotus? Who depicted the dance of Durga and the movement of her two hands in the flow of time as her eight hands? Who decided the form of Shiva, Lakshmi, Durga, Sarasvati, Uma, Ganesha, Skanda, Ayyappa and numerous other devi devatas?  It is the Artist who did it! The artists create and recreate newer and newer traditions.

Hail to the artists of the world!!