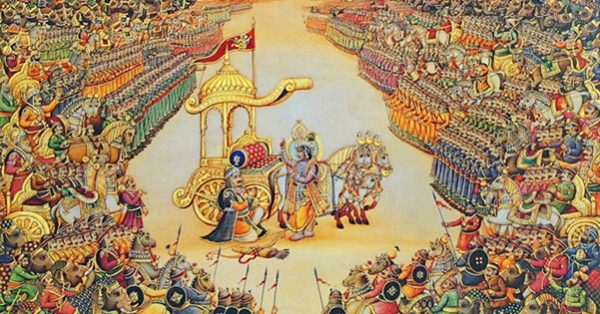 The Sanskrit term for health is swastha which has two roots: sva means “self” or “soul” and sthā means “to stand firmly”. Thus, a healthy person is one who dwells in the Self. Ancient wisdom states that in order to have a healthy body, one’s mind needs to develop soul-consciousness and move away from body consciousness. The concept of soul as an eternal and indestructible entity is beautifully described in Chapter 2 of the Bhagavad Gītā:

The verse emphasizes the fact that ātman is eternal, indestructible, all-pervading, changeless, immovable, and primeval.

Legend has it that when Alexander the Great came to India he met a yogi sitting underneath a tree in deep meditation. Alexander asked the yogi to accompany him to Greece saying, “I will give you everything you ask for. My people would love to meet you!” The yogi quietly answered, “I need nothing, and I am happy where I am!” This was the first time that anyone had turned down Alexander’s request. Unable to control his rage, he thundered, “I am the great king Alexander. If you will not listen to me, I shall cut you into pieces!” Unperturbed, the yogi answered. “You cannot kill me! You can only kill my body, as I am the soul which dwells within the body!” Alexander realized his mistake and beat a hasty retreat unable to subdue an unarmed mystic.

Having attained knowledge of the soul, the question naturally arises: how does one attain soul-realization? Indian scriptures tell us that this can be achieved by the regular practice of yoga. According to the Gītā, yoga has four definitions. The first one says that yoga is “equanimity of mind” — samatvam yoga ucyate. According to the second, yoga is “excellence in action” – “yogaḥ karmasu kaushalam.”  The third definition states that yoga is the union of ātman with paramātman. Finally, the fourth definition says that yoga severs a seeker’s union with sorrow. In other words, yoga practice uplifts the seeker to a higher state of joy and happiness. There is a beautiful verse in the Gītā which describes this aptly:

Let it be known that the severance of union with sorrow is known by the name of yoga. This yoga should be practiced resolutely with perseverance, without any mental reservation or doubts. (Bhagavad Gītā 6: 23)

In the joyous state of yoga, one is situated in boundless spiritual happiness, and enjoys oneself through transcendental senses. Once in such a position, one is never perturbed, even in the midst of the greatest difficulty. This indeed is true freedom from all the miseries arising from material contact.

Chaitanya Mahāprabhu describes this aptly: “God is like the brilliant light, and māyā is like total darkness. Just as darkness does not have the power to subdue light, similarly māyā can never overcome God”. The Gītā reveals that the nature of God is divine bliss, while the consequence of māyā is misery. Thus, one who attains the divine bliss of God can never be overcome again by the misery of māyā.

The Gītā further recommends that a life of moderation, discipline and self-control has to be pursued to attain holistic health. The following verse aptly describes this truth:

He who is temperate in his habits of eating, sleeping, working, and recreation can mitigate all material pains by practicing the Yoga. (Bhagavad Gītā 6: 17)

Sri Kṛṣṇa declares that those who are moderate, restrained and regulated are eligible to practice yoga, which is the union of the soul with God. The opposite of Yoga is bhoga, which means engagement in sensual pleasures. Pursuit of bhoga eventually results in roga (disease). The same instruction was repeated by Gautama Buddha, when he recommended the golden middle path between severe asceticism and sensual indulgence.

The Gītā emphasizes the need for a healthy and balanced diet for the well-being of the individual. Three verses relate to Ayurveda—“the science of long life” tell us about the influence of the kind of foods we eat on our overall physical and mental health as well as our happiness.

For a healthy mind, it is essential to have a healthy body. It is important for a seeker to consume the right kind of foods to have inner and outer vitality. These foods are described in this verse with the words “āyuh sattva”, meaning “which promote longevity”. They provide good health, strength, joy, and satisfaction. Such foods are juicy, smooth in texture, tasteful, and beneficial. These include milk, yogurt, cereals, pulses, fruits and vegetables, and other vegetarian foods.

Hence, a vegetarian diet is considered conducive to the spiritual life. This view has been shared by a number of well-known philosophers in history, including Albert Einstein who wrote: “Nothing will benefit human health and increase chances for survival of life on Earth as much as the evolution to a vegetarian diet.”

Foods that are very bitter, sour, salty, hot, pungent, dry and spicy are dear to those in the rajasic mode”. Such foods cause grief, misery and disease. (Bhagavad Gītā 17: 9)

Rajasic foods are highly bitter, sour, spicy, hot, pungent, acidic, etc. Such foods cause pain, indigestion, ill health and disease. Persons in the mode of passion find such foods palatable, but those in the mode of goodness avoid them.

Foods that are stale, tasteless, putrid, rotten and impure are dear to those in the mode of ignorance. (Bhagavad Gītā 17: 10)

Cooked foods that have remained for more than one yam (three hours) are classified as tamasic. Foods that are impure, have bad taste, or possess foul smells come in the same category. Impure foods also include all kinds of meat products. Foods that are stale, insipid, tasteless, and intoxicating such as meat, fish, eggs, wine, alcohol, tobacco, opium, etc. are the foods of choice for those situated in tamas gūṇ.

The Gītā further tells us that what we speak is vitally important for our well-being and holistic health. The following verse is very significant:

Speech that is truthful, pleasing, inoffensive, and beneficial, and which does not cause distress; and regular recitation of the Vedic scriptures- these are declared as austerity of speech. (Bhagavad Gītā 17:15)

Apart from the importance of spoken words for our well–being, the purity of our thoughts is also linked to our holistic health. In fact, the Gītā says that regular practice of yoga leads to internal purity. The following verse appropriately describes the same:

Serenity of thought, gentleness, silence, self-restraint, and purity of purpose- all these are declared as austerity of the mind. (Bhagavad Gītā 17: 16)

The austerities of the mind mentioned in this verse are serenity of the mind, goodness to other, external and internal silence, restraining one’s mind to stay focused on Self-realization, and purity of purpose. These austerities of mind are in sattva gūṇa, or the mode of goodness.

In Chapter Six, the Gītā says, “Elevate yourself through the power of your mind, and do not degrade yourself; for the mind can be the friend but also the enemy of the Self.” It is a matter of fact that one’s state of mind determines the state of one’s consciousness. Each thought we dwell upon has consequences. Thought by thought, we forge our destiny. It is important to realize that we harm ourselves with every negative thought that we harbour in our mind. At the same time, we uplift ourselves with every positive thought that we dwell upon. So, we must cultivate our mind with rich and noble thoughts, while weeding out the negative and debilitating ones. If we allow resentful, hateful, unforgiving, and critical thoughts to reside in our mind, they will have a debilitating effect on our personality. Love brings love, and hate brings hate. For this reason, switching the mind from negative emotions and making it dwell upon positive sentiments is considered a vital requirement for our holistic health and spiritual well-being.

Basant K. Gupta has been a career diplomat and former Ambassador to Rome. He is author of 'Timeless Wisdom from Ancient India', 'Eternal Beauty and Infinite Joy' and 'The Gita-An Eternal Wonder'.