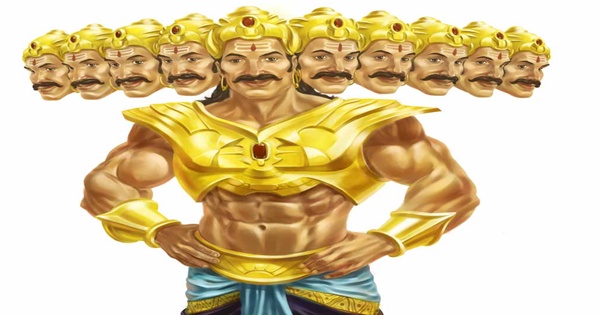 I am Ravan. I have been swallowing the venom of your hatred, disgust, malice, and repulsion for ages. I am a name synonymous with Ram. Whenever you glorify Ram, you condemn me. Every year, you infuse me with life only to burn me amid thousands of my condemners. As I rise in flames, you rejoice. You symbolize my ashes as the victory of good over evil. But believe me, O people of this earth; I am not as evil as I have been portrayed.

Why am I remembered only as the demon king of Lanka who kidnapped Sita? Why am I portrayed only as being defeated and killed by Ram? Isn’t it the duty of a brother to protect his sister? Ram’s brother Lakshman cut off the nose of my sister Surpanakha. Is Surpanakha at fault to fall in love with Lakshman and propose for marriage? But I also admit that Lakshman politely refused to accept Supanakha’s marriage proposal. She should not have repeatedly provoked the brothers or forced them to accept the proposal.

What I did at that point of time was in a fit of rage without going into the details of both sides of the story. I sided with my sister completely. Now I realise that my sister wasn’t at fault proposing for marriage. But she was at fault provoking Ram and Lakshman and trying to harm Sita. Whatever happened was a blunder.

Had Lakshman not insulted my sister, I would not have kidnapped Ram’s wife Sita. I loved my sister more than my own life. I kidnapped Sita only to exact vengeance on Ram and Lakshman. Though I held Sita captive for almost a year, I did no harm to her.

But yes, I should not have kidnapped Sita. By doing so, I had broken the rules of Dharma. I should have directly encountered Ram. The war had to happen. As an astrologer, I knew about the war that would lead to my doom. I should not have involved Sita. I do repent for my sin now. And this is evident in the flames, the ashes – the symbolic burning of my self that I am forced into every year on Vijayadashami. It shows the burning of my ego. Yes, ego has no place in mankind. It only leads to doom.

I have my individual traits, besides my portrayal by the world as an epitome of evil, which I feel I should share with you, my dear condemners.

I existed in a period when kings and kingdoms existed. The struggle for power and kingship ruled my veins. During that time, it was not considered wrong to defeat rulers and take over the reins of a particular kingdom. My step-brother Kuber was the king of Lanka. I overthrew Kuber and took over his kingdom by force. I was never a cruel king. I was an efficient ruler. Under my reign, Lanka turned into a prosperous kingdom.

I am portrayed as a cruel demon king with ten heads. I do not have ten heads, my dear condemners. I am a scholar in six treatises of knowledge called the Shastras and the four Veds. You have misinterpreted these 10 scholastic prowesses of mine as my 10 heads. I am also well versed in 64 different kinds of arts.

I have been a Vaidya (Aryuvedic physician). I am well versed in detailed examination of the pulse including gynecology, pediatric medicine, instant cure of wounds, cure for every complex disease, and lots more. I have written several books on medicine. All of these books are followed by practitioners of Ayurveda today. My book Ravan Samhita describes about the science of Ayurveda.

I am an Astrologer. I am also a scholar in esoteric practices, especially knowledge of tantra. For a perfect horoscope of my son Meghanath at the time of his birth, I made all the nine planets to be posited in auspicious houses. I have compiled my knowledge about Astrology in my book Ravan Samhita. Through my astrological calculations, I have been aware of my impending doom.

Born to Rishi Vishrav and demon princess Kaikesi, I have been a devout follower of Mahadev. I have pleased Mahadev with my penance. An accomplished player of the Veena, I have often played the instrument to delight my Lord. I have invented the bow of the violin and composed the very first Raagas. I have composed Shiv Tandav in praise of Lord Shiv.

Mahadev granted me His Soul (Atmalinga), which I could have used to attain immortality and invincibility. But I was cheated by the Devs. And I admit that I became arrogant after receiving this boon. I also admit that I became egoistic. Ahankar kills! I even challenged Mahadev by trying to destroy Mount Kailash where He was meditating. How could I ever do that! Using just His toe, Mahadev forced the whole mountain on me, crushing my forearm. I screamed in agony. This was how I got my name Ravan (one who screams). And He spared me. I composed the Shiv Stotram, glorifying Him. I repent now for what I had done, for every sin I committed.

I did severe penance to please Lord Brahma. I received a blessing of immortality as boon from the Lord with a condition that I could get killed only if I was attacked in the naval. My younger brother Vibhishan knew about this. He was unkind to me by letting Ram know about this secret on the 10th day of the great battle. Ram exploited this secret to his advantage.

After Ram’s arrow hit my naval and transported me to my death-bed in the battlefield, Lakshman approached me. Ram sent him to me because even he was aware of my scholarly prowess. He wanted Lakshman to learn from me whatever knowledge I could impart from my death-bed.

I imparted Lakshman lessons on statecraft and diplomacy. As I lay dying, even Ram came and knelt at my feet, bowed to me and requested me to share with him my treasure of wisdom. I sought pardon from Ram too for abducting his queen. I gave the wisdom of my life to Ram before I breathed my last.

O people of this earth; I am not as evil as I have been portrayed.