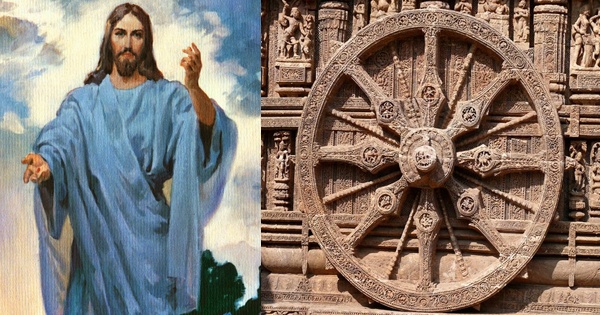 At Winter Solstice, now occurring on 21st December, the sun, as seen and felt from Earth, is at its weakest strength, giving us the shortest day and the longest night (in the Northern Hemisphere where many of the world’s ancient civilizations are situated).  Hence the Sun’s passage through the Winter Solstice is celebrated in these civilizations of the world, as the death and resurrection of the Sun. From the Winter Solstice point, located in the apparent solar orbit in the sky of Earth, the Sun slowly moves to the Vernal Equinox (20th March) growing stronger, brighter and hotter which is in other words, the second coming of the Sun, i.e. its second orbit in the sky. But of course the Sun won’t stop at a 2nd coming or a 2nd  orbit, but continue this cyclic motion making 3rd, 4th, 5th and many more revolutions and ‘comings’ (due to the revolution of Earth in its orbit around the sun). But the Abrahamic theology picks and chooses from this cyclic solar phenomena and attribute only one birth, death and resurrection to Jesus. It stops at the 2nd coming, ignoring the rest. This is much similar to the picking and choosing of Yahweh as the ONE AND ONLY ONE Abrahamic monotheist god, from among the many Gods and Goddesses like Asherah belonging to the ancient Canaanite pantheon.

The Samkalpa of a solar deity or a Sun-God, undergoing death and resurrection is first expressed in ṚgVeda, in the story of Mārthānda, the 8th son of Aditi. The Samskrit term Samkalpa stands for the collective super-conscious expression of an idea or concept having a universal appeal, often wrongly translated to English as faith, belief or myth.  This Samkalpa was later transposed to another son of Aditi viz. Mitra. The sons of Aditi are designated as Ādityās, the Vedic equivalent of Sun-Gods. The Sun God Mithra became popular in the Avestan and Roman literature as the god who was died and resurrected.  In Abrahamic theology this Sun-God who died and resurrected turns into the ‘son of god’ who died and got resurrected.

Thus it takes 25,920 years for the Winter Solstice to make 360 degrees or one revolution in the sky. This period is known to the modern science as the Period of the Precession of Equinoxes, its exact modern value being 25,776 years. The precession of equinoxes occurs due to the precession of the Earth’s spin-axis. This is also the time we arrive at if we add up one ascending Mārkāndeya Mahā Yuga of 12,000 years and one descending Mārkāndeya Mahā Yuga of the same duration, with an interval between them. Mārkāndeya Mahā Yuga is mentioned in the Mahābhārata. It is a suitable time-scale to locate human activity in Bhāratavarṣa since 12500 BCE, fully covering the Holocene period, in which we are now living.

Since there are 365.25 days in a year (or approximately 360 days), 1 degree shift in the position of Winter Solstice in the sky is same as a 1 day shift in the annual calendar of 360 or 365.25 days. The ancients knew this correspondence between the sky and the annual calendar. They also knew the secret of the precession of the equinoxes. Since there is a difference of 4 days from December 25th to December 21st, we can calculate that Winter Solstice occurred on 25th December around 288 years ago i.e. in around 1729 CE.

In Armenia, the Christmas is celebrated on 6th January, the remnant of an older Christmas date, made to coincide with the Winter Solstice when it was occurring at 6th January. In our calculation this will be around 1152 years ago i.e. in around 865 CE.

The Orthodox and Coptic Churches celebrate Christmas on 7th January, which is the remnant of the oldest extant Christmas date, made to coincide with the Winter Solstice when it was occurring at 7th January. In our calculation this will be around 1224 years ago i.e. in around 793 CE.

Thus we have seen that there was never any fixed date of Christmas. The Church occasionally shifted the date of Christmas to coincide with the Winter Solstice, as it shifts slowly in the annual calendar (as well as in the sky) due to the precession of Earth’s spin axis. This shifting of Christmas was done as part of appropriating the world-wide celebration of the Winter Solstice that were observed in the different ancient cultures in the northern hemisphere, in Asia, Europe and North America. The Church also openly admits that the exact date of birth of Jesus is unknown. The clues about seasons mentioned during the birth of Jesus rules out a winter season and indicates that he may be born in warmer climates, in summer or in early fall that are now experienced in March and April .

ṚgVeda mentions about the 7 Ādityas as Varuna, Mitra, Aryama, Bhaga, Amśa, Dhātri and Indra with Mārthānda as the 8th. Another name of Mārthānda is Vivasvat. Later Vishnu was added to the list making it 9. Finally the number became 12 and listed as Varuna, Mitra, Aryaman, Bhaga, Amśuman, Dhāta, Indra, Vishnu, Puśān, Tvaṣta, Parjanya and Vivasvat. These 12 Ādityās preside over the 12 divisions of the sky. The sky with its 12 divisions is mentioned in ṚgVeda as the Kālachakra, which is conceived as a giant wheel-of-time or as a giant natural sky-clock where the sun acts as its ONE AND ONLY ONE dial.

The three motions of the sun, viz. -1. its daily motion (containing sunrise and sunset) due to the rotation of Earth on its own axis, 2. its annual motion (containing Uttarāyana and Dakshināyana, viz. the annual northern and southern movements of the sun) due to the revolution of Earth around sun and 3. its motion due to the axial precession of Earth (containing the ascending Mārkāndeya Yuga and the descending Mārkāndeya Yuga, taking a total of around 25,920 years) can be deciphered from this Kālachakra (the Earth’s natural sky-clock). This was well known to the ancients.

The Āditya Festival starts with the Winter Solstice, currently in 21st December and runs for 12 days. Each day will be celebrated in dedication to one of the 12 Ādityās. The festival will end in 1st January.  Below is an example of how Aditya Festival of 12 days can be conducted from 21st December to 1st January on every year:-

Which Āditya needs to be celebrated in which day can also be left to individual choices to provide some flexibility or it can be synchronized pan India or world-wide with some guidelines and consensus arrived at through different traditional communities. Waking up early in the morning and observing the rising sun with prayers made to the Āditya chosen on that day, needs to be part of the ritual that can be easily observed by all practicing Hindus willing to celebrate the 12 day Āditya Festival. Apart from this, other Pūja and prayers can be performed in temples or in individual houses by the Purohitas.

Traditional scholars are seriously discussing this issue and it is hoped that this will be soon resolved. The festival of Ādityās will then begin soon resulting in the spiritual renascence of this world which is now witnessing a collective spiritual ascend!

1. Clues to the Birth Date of Jesus – By Larry R. Lasiter

3. Christmas Day around the world

3. Most Authentic History of Attacks on India from 636 AD: Hindus Killed in Millions

How to Stay Healthy, Fit and Safe During the Winter Season