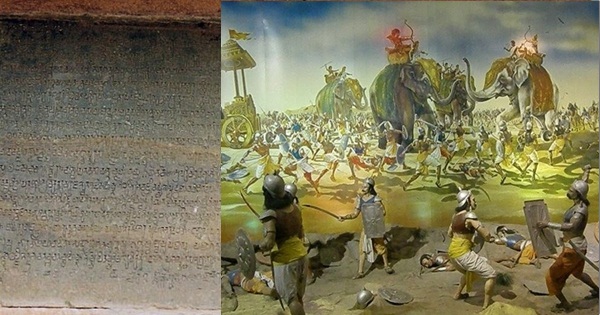 Trinshatsu Trisahasreshu Bhaaratdahavaditaha | Saptabda Shatayukteshu Gateshwabdeshu Panchasu | Panchashatasu Kalaukale Shatasu Panchashatsu cha | Samatsu Samatitasu Shakaanamapi Bhoobhujaam ||
Till now people read it like this:
” ‘3,735 (30+3000+700+5) years have already elapsed since Bharatha war” and 556 (50 + 6 + 500) years since Saka era is running (on this date of engraving this inscription)’.
Considering Shalivahana Saka as 78AD (Note this is assumption),
a) 78+556 = The Inscription is dated as 634 AD
b) 3735 – 634 = 3101 BC is set as Mahabharata war.
Problem here is
1) No body explained why the years are splits like 3000/30/50/6/500 etc..
2) Saka era assumed to be Shalivahan Saka, although there is no proof, it has replaced Vikrama Saka by that time in south.

b) Saptabda Shatayukteshu Gateshwabdeshu Panchasu Panchashatasu => First word is clear 7X 100 = 700. after this word we see “Gata”, which means past. Then we see 2 words, “aswa+abdha“. Aswa means “horse”, Abda means Sea. These words are simple discounted. But these words are not simply inserted here. “Panchasu Panchashatasu” Panchasu Panchashatasu means 55 years. So, if we add all, it means, 700 years back has passed since 55 years of horses coming from sea. This indicates 55 years of horse import happened from Sakas before 700 years (May be sea trade stopped with Sakas due to a war, so the year since this crucial horse import (via sea) stopped 700 years back, which was counted due to strategic importance is also mentioned).

We need to consider this (breaking of Mauryan rules on sea trade) as in the same inscription the following lines appear,

(V. 20.) In the Konkanas the impetuous waves of the forces directed by Him speedily swept away the rising wavelets of pools – the Mauryas. (and pallavas too). So the sea ports that could bring “Arabian horses” were taken after long time (since Mauryan times).

After breaking Konkan, Pulakesi attacks other kingdoms by sea, as seen by the lines followed…

(V. 21.) When, radiant like the destroyer of Pura, He besieged Puri, the Fortune of the western sea, with hundreds of ships in appearance like arrays of rutting elephants, the sky, dark – blue as a young lotus and covered with tiers of massive clouds, resembled the sea, and the sea was like the sky.

Also the famous Ajantha painting of Pulakesi 2’s court scene shows envoys from Persia (the dressing is very clear). Also note the horses were standing with Persian people at the door.  Does this represent restart-of horse trade with Arabaia?? Horse trade was a major political statement of strengthening military in India. The name “horse trade” is so accustomed that any legislator switching parties is considered as “Horse trading” even today. If there was a blockade due to Ashoka to trade horse down south without his notice (or subsequent blockade by coastal kingdoms like  Konkan), Karnataka military power was stunted. Pulekesi-2 breaking such a blockade marks a major event. That is why this painting is done in Ajantha. How can such a “major event” will be missing in an inscription like that of “Ravikeerthi”, that lists all the achievements of Pulekesi-2?

From the wrong dating, the emissaries are written in all publication as, they are from King Khusru-2 of Sassanian empire of Persia. What is the basis for such a claim is not clear.

e) Horse trade stopped = 251 BC  (May be due to Ashokan controls on horse trade).

What is contradictory here

Main objection would be putting Pulakesi 2 at 449 AD would be that, the same inscription refers “Harsha”. We have strong evidence of Hiuen sTsang meeting Harshavardhana in 643 AD (from Chinese sources). Equating Harshavardhana with Pulekesi from this Aihole inscription, historians anchored Pulekesi to 7th century. However, there is no evidence that, “Harsha” in the inscription is same as “Harshavardhana”. As Harsha does not carry a dynansty name in the inscription, it is attributed to Harshavardhana. But that may not be correct. Note the inscription is poetic. Before the line where “Harsha” is mentioned, it talks about 3 powerful regions Latas, Malvas and Gurjaras becoming feudatories. So, the “Harsha” here mean the “Happiness” of the kings of these region. Harsha of the inscription does not ascribe to king Harsha. As there are no other records of war between Harshavardhana and King Pulakesi 2, it is just a tale to link them. Harshacharitha of Banabhatta does not mention this encounter (argument for that is, Harshcharitha is meant to praise the king and hence it does not count his defeats).

The Aihole inscription mentions most of the kingdoms of north. It even mentions “a segment of Mauryans”. But “Guptas are absent. As Guptas were in the recent past (like Pallavas, Chera, Chola etc), Guptas should have come in the inscription. But no mention about Guptas. This has to be explained.

Gandhari was, initially and many more times subsequently, checked by Vyasa from any kind of unfortunate utterance in anger; at one sight she got so overwhelmed with grief and anger that she cursed Govind (Sri Krishna) in the following words in Slokas 43, 44 and 45 of the twenty fifth chapter of the Stri Parva of the Mahabharata:

“O Govind, since you have overlooked the Kauravas and Pandavas fighting and destroying each other, you will also be a destroyer of your own people. In the 36th year from now, your brothers, sons and nobles will also destroy each other in a similar fashion and wandering in the forest you will meet your end in an ignoble manner.”

Again, there is a description in the Mausala Parva of the Mahabharata about how Sri Krishna observed the ominous circumstances at the commencement of the 36th year after the war of Mahabharata and said thus in Sloka 21 of the second chapter (18: 6467):

The time has come for the fulfillment of the curse laid by Gandhari when she was tormented and afflicted by sorrow on account of the slaying of her people.

Wishing to see the fulfillment of the curse Sri Krishna advised the Yadavas to move to Prabhasha Tirtha where after getting drunk they destroyed each other in the ensuing fight.
Ravikeerthi has taken 30 instead of 36. The beginning word of the line Shoula have been,  “षट्त्रिंशत्” . May be for composition purpose or some other reason, it is truncated as, “त्रिंशत् “
So, if we add 6 years, Mahabharata war was 3036 years since the date of inscription. That means, war happened in 2587 BC.

The Munis (Sapta Rishis) were in Magha when king Yudhisthira ruled the earth, the period of that king was 2526 years before the Saka era.
Considering Saka is Vikrama Saka, this works out to be

2526+57 BC = 2583 BC => Yudhistira was ruling (2587 BC is Mahabharatha war and Yudhistira was crowned after that. Note Varahamira says “shasati”, which means, he was already ruling. Varahamira does not say, the celestial event of Sapatrshi in Magha happened during crowning or during Mahabharata war.

So, Varahamihira concurs with the Aihole Inscription.

Now let us see  what Aryabhata stated in Aryabhateeyam… Scholars state that Sage Vaisya, the author of Mahabharata, warned Dhritarashtra of the planetary augury which were a conjunction of Saturn with Aldebaran, a lunar eclipse near Pleiades (an open cluster of hot blue stars in the constellation Taurus), retreating Mars before reaching Antares (the brightest star in the constellation Scorpius).

The fifth century mathematician Aryabhatta calculated this date to be approximately 3100 BC.  (But no specific reference is given to 3100 BC statement. Obviously Aryabhata did not know AD/BC etc. If at all he states, it should be with Kalikala or with reference to Vikrama Saka. 3100BC of Aryabhata is again derived figure, by putting Aryabhata simply at 5th CE.)

What Aryabhata states is that:

But many Historians do not want to see him in 11th CE but in 5th CE. So, it is tweaking Mahabharata war time.

What they denote is not clear. May be Alberuni was misguided completely. Alberuni’s 3101BC reference was used to justify wrong interpretation of Aihole Inscription. But Alberuni statement itself is wrong as he “predates” Kalikala before “Pandavas”. Indian scriptures consistently say, till Krishna’s death, it was “Dwapara Yuga”.