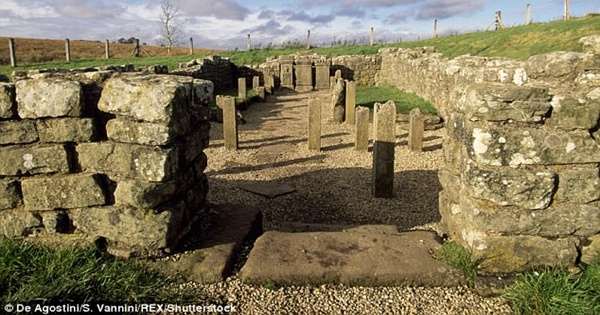 An article published by the Daily Mail of UK has thrown new light on the worship of Sun God and how the mystery cult of sun worship aligns with the sunrise on the birthday of Jesus. This is proven based on a new analysis involving use of satellite maps and a software that can plot the direction of sunrise and sunset. The analysis revealed that the ‘Mithraeum’ – the ancient Roman temple of Sun God beside a Roman fort in Carrawburgh lines up with both the winter solstice and Christmas Day.

Researcher Amelia Carolina Sparavigna of Politecnico di Torino, who was involved in the analysis, argued in a new paper published to Philica that the temple at Carrawburgh was likely designed around the birth of Mithras. Her arguments provide further support about the hypotheses on the winter solstice alignment.

Mithras correspond to the Adityas, the Sun Gods according to Vedic philosophy. Varuna, Mithra, Aryama, Bhaga, Amśa, Dhātri and Indra are the 7 Adityas mentioned in the Rigveda. Later 5 Adityas were added – Vishnu, Puśān, Tvaṣta, Parjanya and Vivasvat to form the 12 Adityas who preside over the 12 divisions of the sky.  The 12 divisions or the 12 Adityas are mentioned in the Rigveda as Kalachakra. Mithra as the Sun God and the son of Aditi first finds mention in the Rigveda. And Mithra became popular in Avestan and Roman literature as well as in Abrahamic theology. The Church indeed shifted date of Christmas to coincide with the winter solstice.

To pinpoint the direction of sunrise and sunset at different times of the year for this location, Carolina Sparavigna used the SunCal.net software. The analysis revealed ‘good alignment’ for the Dec 25 sunrise along with the winter solstice (Dec 21), with a difference of just .2 degrees as per the Daily Mail report. She wrote in the paper that the orientation of the temple was chosen to recall the birth of Mithras on December 25.

Sparavigna said that worship of Mithras spurred the rise of a ‘mystery cult’ during the Roman era, which was practiced from roughly the 1st century CE to the 4th century. The worship was often also linked to the Sun God, Sol Invictus, who was the patron of the Roman soldiers. She wrote that the followers of Mithras worshipped the New Year on December 25, to celebrate the birth of Mithras.

The researcher also mentioned about two other examples of Roman military camps – Hardknott Roman fort and the Roman fort of Segontium built in alignment with the sunrise or sunset on solstices that have been found in the past.

According to Kenneth Humphreys, actor and author of Jesus Never Existed, “Christianity was the ultimate product of religious syncretism in the ancient world. Its emergence owed nothing to a holy carpenter. There were many Jesuses but the fable was a cultural construct.”

“The nativity yarn is a concatenation of nonsense. The genealogies of Jesus, both Matthew’s version and Luke’s, are pious fiction. Nazareth did not exist in the 1st century AD – the area was a burial ground of rock-cut tombs. With multiple authors behind the original gospel story it is no surprise that the figure of ‘Jesus’ is a mess of contradictions….The 12 disciples are as fictitious as their master, invented to legitimise the claims of the early churches.”

“Many aspects of the gospel story about Jesus Christ, and of Christian tradition in general, represent motifs from older astrotheology and solar mythology, specifically reflecting legends and myths regarding the sun gods of antiquity…. The exploration of Christ as a solar figure includes a study of ancient sun worship not only in the Pagan world but also in Israel….” This finds mention in the book Jesus as the Sun throughout History by D.M. Murdock and Acharya S.

1. Ancient Roman temple built by the mystery cult of Mithas aligns with the sunrise on the birthday of Jesus
2. Jesus Never Existed by Kenneth Humphreys.