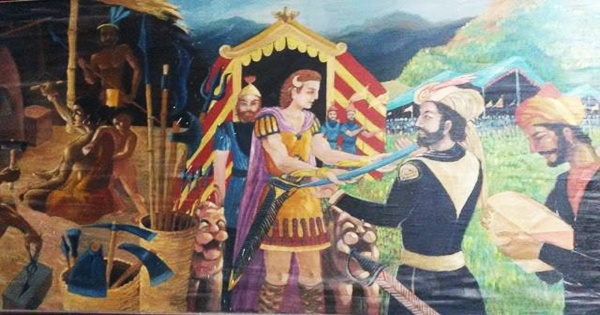 Do you know steel (loham) was one of the primary export products in ancient India for thousands of years? Wootz, Ukku, Hindvi Steel, Hinduwani Steel, Teling Steel and Seric Iron – these were different names of the steel alloy that was exported from the southern parts of India. Major export markets of ancient India by 500 BC were Rome, Egypt, Arabia, China, Europe, and more kingdoms. This pioneering steel alloy matrix is called wootz steel. It was developed in Southern India in the 16th century BCE.

Western historians including few modern Indian historians mark this date as 6th century BCE. But the chronological dates have been distorted badly by the West, so much so that according to them Vedic era started in 1500 BCE instead of 15000 BCE as per proofs from inscriptions and literary evidences. Hence, their projection of the dating of the origin of wootz steel as 6th century BCE is fictitious.

Wootz steel is a crucible steel characterized by a pattern of bands. These bands are formed by sheets of microscopic carbides within a tempered martensite or pearlite matrix in higher carbon steel, or by ferrite and pearlite banding in lower carbon steels. It was a pioneering steel alloy developed in Southern India and exported globally. It was also known in the ancient world by many different names as aforementioned.

Wootz steel is a crucible steel characterized by a pattern of bands, which are formed by sheets of micro carbides within a tempered martensite or pearlite matrix in higher carbon steel, or by ferrite and pearlite banding in lower carbon steels. This steel alloy was exported globally as per known records but could be more than 6000 BCE. We talk about modern technological advancements today. Imagine how technology was so highly advanced in ancient India!

References about high carbon Indian steel are found in several ancient Tamil, Greek, Chinese and Roman literature. There is abundance of references from from the time of Alexander’s India campaign. The crucible steel production process started at production sites of Kodumanal in Tamil Nadu, Golconda in Telangana, Karnataka and Sri Lanka and exported globally.

The process of making wootz steel by ancient Tamilians is noteworthy. They heated black magnetite ore in the presence of carbon. This was done inside a charcoal furnace in a sealed clay crucible. In the process, the slag were completely removed. Leaves of avarai and similar plants including bamboo were used as the source of carbon. Another way they followed was producing wrought iron first by smelting the ore. This was followed by heating and hammering for removing slag. These methods were later adopted by the Sri Lankans and the Chinese.

Do you know the Tamils of the Chera Dynasty produced the finest steel in the world? The wootz steel was exported as cakes of steely iron. The process involved heating of black magnetite ore in the presence of carbon in a sealed clay crucible inside a charcoal furnace. An alternative was to smelt the ore first to give wrought iron, then heated and hammered to be rid of slag. The carbon source was bamboo and leaves from plants such as Avarai. The oldest iron and steel Indian artifacts and production processes dating back to 200 BCE have been found in Sri Lanka.

The Arabs who introduced the South Indian wootz steel to Damascus, where an industry developed for making weapons of this steel. According to Sharad Srinivasan, “Indian wootz ingots are believed to have been used to forge the famed Oriental Damascus swords which have been found to have a very high carbon content of 1.5- 2.0% (Smith 1960: 14-6). The Persian Damascus blades, made in Khorasan and Isfahan from South Indian wootz from Golconda, were known to be the finest weapons then made in Eurasia (Bronson 1986: 22-3, Smith 1960: 14-6) and were reputed to cut even gauze kerchiefs (Bronson 1986: 1).”

To quote further, “During the course of field investigations of copper mining and smelting in South India, the author of this paper came across a previously unrecorded archaeometallurgical site in Mel-siruvalur, South Arcot district, Tamil Nadu, which investigations have confined was a production centre for wootz crucible steel in the Deccan. The find of this production centre supports the idea that wootz steel production was relatiYely widespread in South India, and extends the known horizons of this technology further.”

The 12th century Arab traveler Edrisi mentioned ‘Hinduwani’ or Indian steel as the best in the world. A Persian phrase finds mention about ‘a cut with an Indian sword’. Such was the quality of loham from India in the international market!

1. Bhaskaracharya, not Newton, Discovered Law of Gravitation; Clue of Gravity in 6000 BC ‘Prashnopanishad’