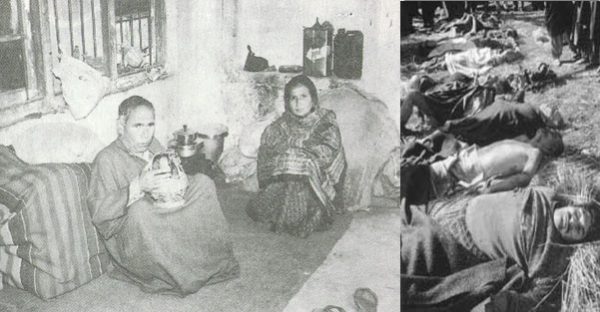 Kashmiri Pandits! Refugees in their own homeland. There can be no sadder plight than this! Not a word is spoken in favor of the Kashmiri Pandits by the so called media or secular folks! It is but an irony that even international human rights organizations are not standing up for Kashmiri Pandits rendered homeless in their own motherland? Yes, they all have been indeed raising their voices for the settlement of illegal Rohingya Muslims in India with even PIL filed being in the Supreme Court so that they are not displaced from India!

Kashmiri Pandits have been living in Kashmir since 5000 plus years. Do you know Kashmiri Pandit women were held in high regard since time immemorial? But the scenario changed altogether ever since the partition of Hindustan and Pakistan. Had Nehru dealt with the issue with an iron hand, Kashmir problems would have never cropped up.

According to an Indian Express report, “The killings of Kashmiri Pandits include the massacres at Sangrampora, Wandhama and Nadimarg — seven were killed during the night of March 21-22, 1997 at Sangrampora village in Budgam, 23 were killed in Wandhama on January 25, 1998 and 24 died in Nadimarg on March 24, 2003…perpetrators of the Wandhama massacre are still untraced. But the police has identified Pakistani militants Abu Haris and Abu Khalid as those who carried out the Sangrampora killings. Both militants were killed in an encounter at Hewader on March 24, 1997. The police has challaned the Nadimarg massacre case, identifying Zai Mustafa alias Abdullah of Rawalakot, Pakistan as the perpetrator.”

But the above figures aren’t true. The real figure is different – many times more than the officially reported ones. According to official figures, over 62,000 Kashmiri migrant families have registered with the government. 40,000 of them are registered in Jammu, 20,000 in Delhi, and 2,000 in the rest of India. The death of Kashmiri Pandits in the valley during their Exodus in 1990 is uncountable. The perpetrators haven’t been punished yet.

Thousands of Kashmiri Pandits are still refugees in their own motherland! The irony is that illegal Rohingyas find safe haven in the ancestral homeland of the Kashmiri Pandits! No media speaks about these. And they have been suffering in silence since the Exodus. It is time the government considers this issue as serious and implements initiatives for their fast resettlement.

In this context, Maj Gen GD Bakshi says, “It is a national disgrace that we have not been able to reverse the ethnic cleansing of Kashmiri Pandits for almost 30 years. This was genocide. Leave alone punishing the perpetrators, we have not been able to send the victims back to their homes. The valley has been thoroughly Wahabised and communalized. It is today a vast ghetto. The only way the Kasmiri Pandits can be sent back is by creating safe and protected enclaves in the valley and in Patnitop area. Otherwise we will just be inviting more Nandimarg type massacres”

The Indian Army under Maj Gen GD Bakshi was successful in foiling the attempts of the ISI, killing all terrorists involved and facilitating safe return and settlement of the Dogras in their home valley. Maj Gen GD Bakshi was the sector commander of this region in Oct 2000. He immediately brought the situation under control. Several Dogras including women and children were mercilessly killed by terrorists in August 2001 in Kishtwar. General Bakshi, recognizing the severity and seriousness of the situation, used all the forces under his disposal to track down the terrorists. Within a month, all the terrorists involved in this massacre were tracked down and eliminated.

Maj Gen GD Bakshi in his book Kishtwar Cauldron recounts the harsh struggle to protect the population from such genocidal attacks and the strenuous attempts made to prevent their large scale exodus to Himachal. It was a very taxing struggle but the Indian Army succeeded at last in deterring such attacks. The Indian Army and the people gave Pakistan a fitting reply by exterminating the terrorists.

Let not the Kashmiri Pandits continue to be refugees in their own motherland! Jai Hind!