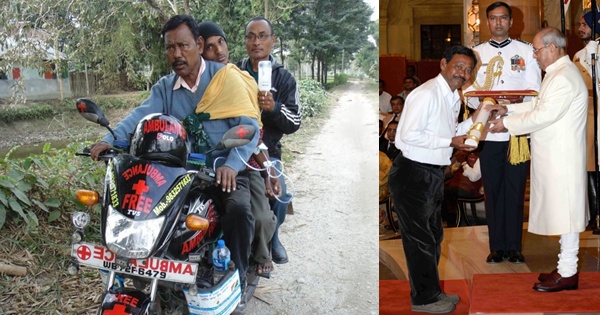 Humanity does exist amid adversity. For a person to help a fellow being and the society at large, riches aren’t all that is required. And this happens only in India! This is best corroborated by the selfless service of a tea-garden worker who earns a monthly salary of just Rs. 5000. And he is happy running his family as well as serving people from his village and neighboring villages with this meager amount. He is Karimul Haque from Dhalabari in Jalpaiguri district of West Bengal.

50 year old Karimul Haque runs a bike ambulance for free. He is known in his region as the ‘Bike Ambulance Dada’. The tea garden area is a feast for the eyes, but lack of proper roads, basic amenities and medical facilities are the disadvantages. He ferries the sick to the nearest hospital for free. Till date, Karimul has ferried 5000 poor patients from 20 villages in Jalpaiguri to the hospital since the last 14 years. He is a ray of hope to the poor and needy in his village and neighboring villages.

Karimul says, “Many years ago, my mother suddenly fell ill in the middle of the night. She was in dire need of medical attention. But the hospital was located several kilometers away. I had no vehicle in my house then. Neither was there any ambulance facility nearby. I went from door to door for help, but in vain. And my mother breathed her last. I failed to save her.”

An inconsolable Karimul decided that night that thenceforth he would not let any sick person in his village die due to lack of ambulance facilities. He somehow managed to buy a bike. Some 14 years ago, a co-worker collapsed while on duty. There was no ambulance or four-wheeler to take him to the hospital. Hospital authorities, on knowing about the incident, sent an ambulance. But it would take time. Immediately, an idea struck his mind, as he could not afford his co-worker risk his life waiting for the ambulance. He tied the patient to his back, made him ride pillion and took him to the nearest hospital. His bike ambulance saved his co-worker’s life!

And then there was no looking back. He made himself available for 24 hours to ferry any sick person from his village or nearby areas to the hospital for free. With the help of the local doctors, he also started organizing healthcare camps. He has even trained himself in medical first aid from the local doctor to control emergency situations.

“I told my wife that I get a salary of Rs. 5000 per month. When my mother was alive, I spent Rs. 1000 on her for her basic needs. She is no more. I can use that amount of 1000 to buy petrol for my bike ambulance so that I could ferry the sick to the hospital,” said Karimul. He continued after a pause, his eyes already turning moist, “My wife agreed. She had no objection.”

Recently Karimul was invited to the sets of Zee TV’s Sare Ga Ma Pa Little Champs where he was honored with a momento. The audience’s eyes turned moist listening to his story. Famous singer Neha Kakkar, a judge in the singing show, declared that she would donate Rs. 1 lakh to Karimul Haque so that he could use the money over time to buy petrol for his bike ambulance to ferry the sick to the hospital. It was then learnt that Karimul had bought the motorbike on loan. He felt happy to use part of the donated amount to pay his loan.

Karimul Haque’s dream is to make an advanced ambulance equipped with all necessary facilities, available at his village. He was rightly honored with the Padma Shri Award for his efforts.

Towards India’s New Era Paradigm: Reformulating Karma and Past Lives