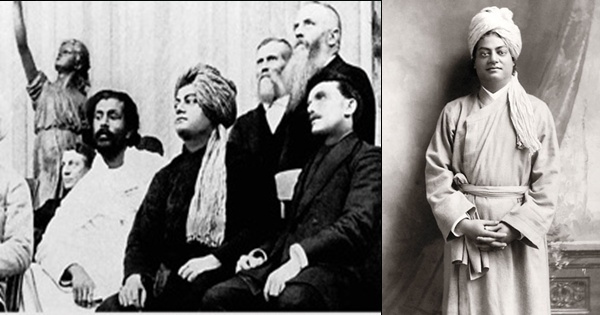 It was the year 1893 when Swami Vivekananda, funded by the Maharaja of Khetri, visited Chicago to attend the World Parliament of Religions. His objective was to introduce Hinduism to the West. In his inaugural address beginning with the famous words “Sisters and brothers of America”, he said, “I am proud to belong to a religion which has taught the world both tolerance and universal acceptance.”

Vivekananda’s philosophy had always inspired me. And that is why I was extremely keen on visiting Chicago, so that I could trace his footsteps at what is now Fullerton Hall at The Art Institute of Chicago.

In August 2015, my family and I visited Chicago. We reached on a dark, cold, rainy night and were very tired. The next morning, when I saw the city, I was struck by wonder. Seeing Chicago in daylight is an eye-popping experience – high-rise, affluent buildings, chic stores, and beautifully kept roads.

I immediately remembered the movie Dhoom 3, of Aamir Khan riding his bike vertically down the buildings. Indeed, Chicago’s architecture is gorgeous, and I understood why the city was chosen as the backdrop for this thriller. Many of the scenes from the movie focused on the architecture and the hero and his pursuers zooming through the various landmarks on their bikes.

In the afternoon, we went to the lovely Millennium Park where a structure/sculpture nicknamed ‘The Bean’ (because of its shape) is located. The Bean is made of 168 stainless steel plates and is designed by a British architect of Indian origin, Anish Kapoor. Hundreds of families were taking immense delight in exploring ‘The Bean’, clicking photos under and around it. Suddenly, we were approached by a young, beautiful couple who requested us to take their picture. The woman was very stylishly dressed, wearing dark glasses and a long skirt, and the man was tall and handsome. He asked us whether we were from India, and we nodded. 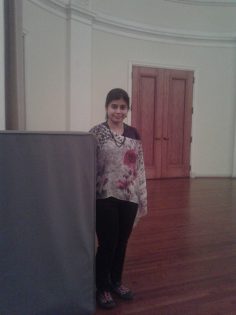 Dais from where Vivekananda delivered his electrifying speech at Chicago

The lady then asked us, of her own accord, whether we would like them to take a snap of all four of us together. As I fumbled with my smartphone, I said, “I can’t find the button!” in Bengali. She replied, “I will find it myself!” in Bengali. I was too surprised. She laughed and said, “We are Assamese. We know Bengali very well!” I was touched by their warmth.

Our next stop was the famous Art Institute of Chicago, one of the top museums in the world. Here, we stepped into the pages of ancient India. The first section we entered was the Asian section. There were ancient Indian sculptures preserved wonderfully, dating back to thousands of years.

For instance, there was a red sandstone sculpture of Dancing God Shiva from 10th/11th century, a sculpture of marriage of Shiva and Parvati dating back to the same time, another sculpture entitled ‘Twenty-Armed Dancing God Ganesha, Remover of Obstacles’ and many more. 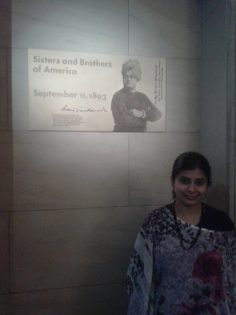 However, the best experience in Chicago was following the footsteps of Swami Vivekananda. On request, an attendant took us to Fullerton Hall. Tucked away in a corner of the museum is the well-maintained hall. It was here that the great Indian mystic, Swami Vivekananda, stood at the now-hallowed dais and delivered his electrifying speech at the World Parliament of Religions on September 11, 1893.

A plaque marks the site, and leaflets are available that contain an introduction to Swamiji as well as the full text of his speech. I was lucky to be at the same spot where Vivekananda stood. The flyer further mentions “Passionately and eloquently, Vivekananda called for the end of religious bigotry and intolerance…” 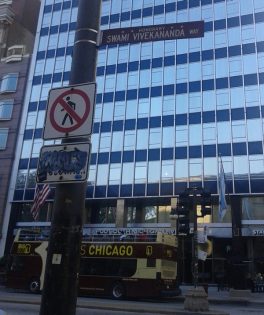 It was a speech that still has significance in today’s world. In 1898, the original auditorium was replaced by Fullerton Hall. However, a museum employee told us that the existing dais was the same one used by Vivekananda. And yes, the name of the street where the museum is located is ‘Honorary Swami Vivekananda Way’. As an Indian, I felt proud and appreciative of the respect accorded by America to Swami Vivekananda.

My trip to Chicago made me more appreciative and nostalgic about India than ever before.

A Gold Medalist in English Literature, Jagari Mukherjee is a content writer and poet. She has written for magazines, newspapers, webzines and blog platforms. Her debut book 'Blue Rose', a collection of poems, was published in May 2017.