Men and memories! Are these two phrases connected? Certainly not! It was our anniversary and my husband was in a different city for work. Me, being a woman, always think of ways to surprise him and in the same way have lot of expectations from him to make that day special, year on year. So, obviously I had waited eagerly for it since weeks.

This time, after 7 years of marriage, I wanted Him to wish me first instead of me surprising him like every year. As the clock struck 12 am in the night and the new day had set in, I waited for his call but nothing happened till 1 am and I fell asleep. I woke up early in the morning and checked my phone in full excitement for his message, but in vain. After waiting for his call till afternoon, at last I couldn’t control myself anymore and gave him a call at around 12.40 pm.

I started the conversation dropping large hints again and again. I asked him –

Me – What’s the date today?

Me – Hmmm, our son’s final exams would be over today

He – (Totally innocently he repeated) 10th of March

Me – okay, we have almost 1 month of vacation starting from tomorrow, need to think of ideas to keep him busy. Can you repeat the date once again?

Me – (of course totally pissed by then) FINE…talk to you later..

Yes, he did surprise me as I had expected, even if in the wrong way.

So the big question is – WHY DO MEN FIND IT SO HARD TO REMEMBER IMPORTANT DATES OR ANNIVERSARIES?

Right from the earliest days, men have always been programmed to be the provider and protector of the family. With time, as we became more civilized, though the ways of providing and protecting have changed, the core idea has remained the same. In the initial days of courtship the same dates have been quite important as the focus was on the woman, but after marriage the responsibilities increase and hence the focus shifts to other important aspects of life.

Women on the other hand have always been the nurturer and the care giver. Though in the earlier time she was confined to home and family, with time she has ventured out from this space to be an all rounder. But as she remains the main care giver and spends more time around the house taking care of everything, it’s easier for her to remember things like the grocery list or the medicines or the dates in particular. 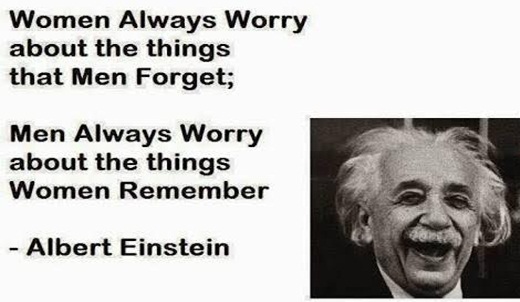 Tip – If you want him to remember things easily, involve him more in household chores and duties. It’s a win-win situation. Not just you will get a helping hand around the house, in return you are saving him from forgetting the important dates and things of life. And dividing responsibilities and doing chores together makes the relationship stronger.

Men Are Mechanical while Women Are Emotional

What exactly Men remember about the anniversary is that what had happened on that day, i.e., they got married on that particular date, an important goal achieved in life and now move on to achieve the next goals. While women focus more on the happiness quotient of that day, the memories, the beautiful moments etc.

So, don’t blame them, they are just wired to think mechanically. Remember the verse “Men are from Mars and Women are from Venus”?…Yeah Venus, the planet of love.

Tip – To avoid heart breaks, start dropping hints much in advance like – Let’s plan a vacation on our anniversary. Or maybe – I would like a diamond ring for my birthday this year. It does help. And Men, do take cue from the hints if you want to avoid the “I AM FINE” situation on the very day.

Mom Taught Us So

As it is a universal fact, mothers play an important role in nurturing a child’s early years. We tend to share more with our daughters than with our sons. Be it like what happened in the class, or friends, or which dress to wear, or how to make things, or just talk about anything in the world. Studies show that a person who is more educated forgets less than a person who is less educated. And yes these little talks in the early years are also a good deal of education.

Tip – To make your sons, the future men, more equipped with memory power, talk more to them. Not just about studies or good and bad manners but just about anything in the world as you would do with your daughters. Sow the seeds of a stronger relationship right in the early years of life.

So, before losing your cool next time try these simple tips and lead a happy married life.

Drug Expiration Dates – Do They Mean Anything?