Tradition of Pottery Making for Jagannath Continuing since 12th Century 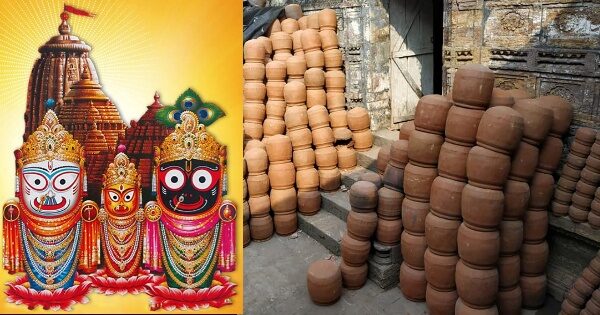 Located near Atharnala, the families settled in the area have also been associated with the Jagannath tradition since the 12th century. According to old timers, the potters started making earthen utensils when Adi Shankaracharya started the tradition of Mahaprasad in Puri Dham. And it continues to this day. Lord Jagannath, Lord Balabhadra, and Maa Subhadra are offered Mahaprasad in handi, kuduas, olis and several other earthenware crafted by the potters of Kumbharpada. Like Kumbharpada, there are three other mauzas in Puri with thriving potters’ communities. These are Nua Sahi near Nabakalebar road in Puri, Tikarpara village near Indradyumna pond and Gopalpur near Balighai on the outskirts of Puri.

As per history, the potters in Kumbharpada were only engaged in the service of the Jagannath temple in Puri for centuries until newer markets of earthenware came up with the passage of time.

Time has also seen other changes in the lives of these potters and their work. Earlier, the fine, wet clay that is used to make utensils was easily available within a distance of 1-2 km at crop fields. This was collected by the womenfolk and brought back for pottery making. The ritual, however, came to an end with the gradual urbanization. The crop fields were taken for concrete construction that disrupted and reduced the amount of clay collection. At present, the clay is brought from Chandanpur, which is 15 km away from Puri town. The potters’ community at Kumbharpada has 60 to 70 families engaged in their ancestral occupation.

There are two types of kilns used to bake pottery in Kumbharpada. The first ones are huge structures that are approximately 10 to 12 feet in height. These kilns are built by combining mud, clay and bricks that require the manpower of 4 to 5 men and take around 90 days to complete. These are used to bake big clay utensils like kudua and handi and the process lasts for 10 days. These are covered with broken and unusable other clay utensils, hay, and mud so that the heat won’t come out.

The other ones are comparatively smaller with heights ranging from 3 to 5 feet. These can be constructed by one person within 15 days. These small kilns are used to bake earthen lamps, bowls, tea cups etc. The dry twigs, logs of Casuarina commonly known as Jhau tree are used as fuel wood. The entire community makes a profit of Rs 1-1.5 lakh per day out of clay products.

However, the profit margins are unjustified in certain cases of marketing because of which the craftsmen and artisans don’t get valid prices for their products. For instance, a clay vessel costs Rs 50-100 if bought from an artisan or warehouse directly, but the same thing would cost 10 times or more at any online shopping site or posh showroom. While that is the case with every sellable thing, the artisans and craftsmen are the ones whose pockets get affected due to this malpractice.

Kumbharpada also sets a great example of equity. The men and women of every household in the area indulge in labour equally; the womenfolk make clay bowls known as olis for Jagannath temple. These are used to make offerings of dishes like Besara, Mitha Dali, Saga Bhaja, etc. to the deities. These are crafted completely with hands.

On their part, the male members of the family craft the larger handi and kudua. Interestingly, the clay utensils being used in Jagannath temple have lotus petals etched on them.

Besides the Jagannath temple, clay utensils made at Kumbharpada are also exported to other shrines in Odisha such as Ananta Vasudeva, Lingaraj, to name a few. What’s more, the potters’ community here has departmental divisions from manufacturing to transportation.

Note: Interestingly in the recent times, Shri Vedveer Arya in his book Chronology of India provides sufficient evidence to the fact Shri Shankaracharya lived between 500 BCE to 600 BCE. He goes ahead with astronomical and literary evidences to prove his birth in the year 568 BCE. This is an indicator of the fact that these potteries have been in use for more than 2000 years as against an estimated 900 years as laid down today.

Surya Roy is an IT professional and an independent researcher of Indic history and culture. He has done his post graduation in Commerce & Logistics management.