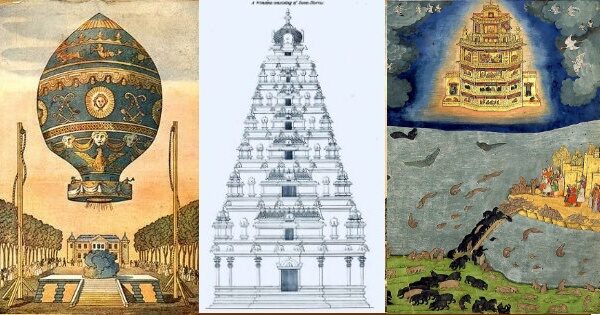 To quote from the Preface by John Bruno Hare from the book Maharishi Bharadwaaja’s Vymaanika Shaashtra or Science of Aeronautics as revealed to Subbaraya Sastry and translated by GR Josyer, “The Vymanika Shastra, however, is not a myth….There is an intriguing list of Vimana capabilities, particularly what we today call countermeasures. This includes means to view remote images on screens, listen to remote sounds, disguise the vimana as clouds or other images, create terrifying sounds, and so on. There is an extensive discussion of the various types of vimanas and their construction, including some that can double as boats or submarines. There are discourses on the structure of the atmosphere, aeronautic hazards and how to avoid them, and even a section on diet and clothing for aviators!…..Vimanas are widely described in the genuine ancient texts such as the Ramayana and Mahabharata, as well as other later texts such as the dramas of Kalidasa. They are not metaphors or hyperbole, nor do you have to be a god to own or ride one as in other mythologies. They are treated as manufactured, physical objects, even if portrayed as fanciful flying houses, invested with magical powers of levitation.

Vaimanika Shastra describes different types of vimanas. Maharishi Bharadvaja dictated thus about the pushpak vimana, as quoted in Maharishi Bharadwaaja’s Vymaanika Shaashtra or Science of Aeronautics, “Pancha-vimshan Maantrikaaha Pushpakaadi Prabhedena”. This is in the second sootra. It means that maantrika vimanas are of pushpaka and other 25 varieties. To further quote from this book,

Vedveer Arya, author of Chronology of India, writes thus about the pushpak vimana, “Rāmāyaṇa tells us that Rāvaṇa forcibly took over the city of Lankāpurī and Pushpak Vimana (Puṣpaka Vimāna) from his brother. Vaiśravaṇa migrated to Alakāpurī of Yakśas in the North. Vimāna or Puṣpaka Vimāna was like a hot air balloon carrying a specially designed chariot.

Viśvakarmā, the contemporary of Vaiśravaṇa and Rāvaṇa, made a flying chariot named as Pushpak Vimana. Interestingly, King Śālva of Saubha (11150-11050 BCE) was the first to use Vimāna when he attacked the city of Dvāravatī. Rāma, along with Sītā, Lakśmaṇa and Hanuman, boarded the Puṣpaka Vimāna and returned to Ayodhyā from Sri Lanka in just eighteen days.

The Rāmāyaṇa describes Pushpak Vimana resembling a summit of mount Meru (tam Meruśikharākāram nirmitam Vishvakarmaṇā) that indicates the size of a huge air balloon. The description of the take-off of Puṣpaka Vimāna in the Rāmāyaṇa as “Utpapāta Vihāyasam” also indicates the ride of a hot air balloon.

Selected natural silk with appropriate coatings can be excellent balloon material. Viśvakarmā of the Rāmāyaṇa era might have used natural silk to make the fabric of hot air balloon.

According to Zoroastrian history, the Kayanian King Kai Khusrow also travelled in an aerial vehicle (hot air balloon) from Iran to China (Xinxiang). In ancient Greece history, Phrixus and Helle were rescued by a flying ram (air balloon) sent by Nephele, their natural mother. Helle fell off the ram into the Hellespont.”

What the ‘Vaimanika Shastra’ Tells about Ancient Vimanas of India