Puru Defeated Alexander in the Battle of Hydaspes; Here Are Evidences 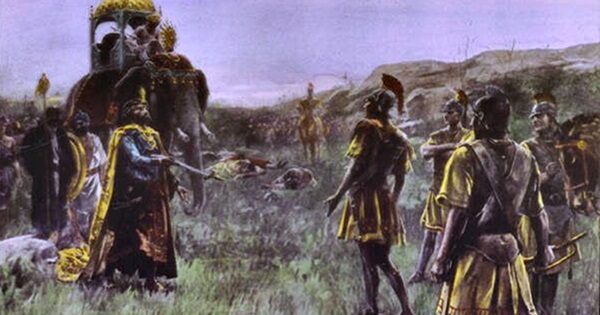 Alexander, having won all the kingdoms west of Greece up to Bacteria (Persia), proceeded to India, defeated many kings and finally met his foe Porus in Punjab. Alexander entered into a pact with Ambhi, a sworn enemy of Porus with whom he attended Taxila as a student.

Alexander defeated Porus and in appreciation of his valor, Alexander gave the kingdom back to Porus and left Selecus Nicator as his representative in India. This is utter lie. Facts lie below.

Strabo, the Greek historian wrote: “Generally speaking, the men who have written on the affairs of India were a set of liars…Of this we became the more convinced whilst writing the history of Alexander.”

“After Alexander’s failure to gain a position in India and the defeat of Seleucus Nicator, relationships between the Indians and the Greeks and the Romans later, was mainly through trade and diplomacy. The Greeks and other ancient peoples didn’t see themselves as in any way superior, only different.”

This statement by Russia’s Marshal Gregory Zhukov on the Macedonian invasion of India in 326 BCE is significant because unlike the prejudiced colonial and Western historians, the Greeks and later Romans viewed Indians differently.

For instance, Arrian writes in Alexander Anabasis that the Indians were the noblest among all Asians. In fact, Arrian and other Greeks say the Indians were relentless in their attacks on the invaders.

They say if the people of Punjab and Sindh were fierce, then in the eastern part of India “the men were superior in stature and courage”. All this is glossed over by Western historians, in whose view the one victory over king Porus amounted to the “conquest of India”.

But the Greeks made no such claim. Greek contemporary writers describe the Battle of Hydaspes (Jhelum) as the hardest fought of all Alexander’s battles.

Frank Lee Holt, a prof of ancient history at the University of Houston,writes in his book, Alexander the Great and the Mystery of the Elephant Medallions: “The only reference in Arrian’s history to a victory celebration by Alexander’s army was after the battle with Porus.”

The fact they celebrated after the Battle of Hydaspes suggests they considered themselves extremely lucky to survive after the clash with the Hindu army, with its elephant corps.

According to the Greeks, Alexander was apparently so impressed by Porus that he gave back his kingdom plus the territories of king Ambhi of Taxila who had fought alongside the Macedonians.

This is counterintuitive. Ambhi had become Alexander’s ally on the condition he would be given Porus’ kingdom. So why reward the enemy, whose army had just mauled the Macedonians?

The only possible answer is at the Battle of Hydaspes, the Macedonians realised they were dealing with an enemy of uncommon valour. Sensing defeat they called for a truce, which Porus accepted.

The Indian king struck a bargain in return for Ambhi’s territories, which would secure his frontiers, Porus would assist the Macedonians in leaving India safely. Alexander’s post-Hydaspes charitable behaviour, as per Greek accounts, is uncharacteristic and unlikely.

For, in battles before and after, he massacred everyone in the cities he subdued. Description of the War: The Greek force, after having lost several thousand soldiers fighting much smaller Indian mountain cities, were terrified at the prospect of fighting the Paurava army.

They had also heard about the havoc that Indian war elephants were supposed to create among enemy ranks. The modern equivalent of battle tanks, the war elephants also scared the wits out of the horses in the Greek cavalry.

According to the Roman historian Marcus Justinus, the battle was savagely fought. Puru challenged Alexander, who charged him on horseback.

In the ensuing duel, Alexander fell off his horse and was at the mercy of the Indian king’s spear (and this is where legend meets history) when Puru perhaps remembered his promise to his rakhi sister (probably a Trojan horse sent in by the Greeks).

He spared the Macedonian’s life, and Alexander’s bodyguards quickly carried off their king. The Greeks may claim victory but if Alexander’s troops were so badly mauled by the petty regional fiefdoms, how could they have crushed the comparatively stronger army of Puru?

An unbiased re-examination suggests the Greeks had lost the battle. In his epic, The Life and Exploits of Alexander the Great, a series of translations of the Ethiopic histories of Alexander, E.A.W. Budge, Egyptologist, orientalist and philologist,has given a vivid account of same.

According to Budge, in the Battle of Hydaspes, the Indians destroyed the majority of Alexander’s cavalry. Realising that if he were to continue fighting he would be completely ruined, the Macedonian requested Puru to stop fighting.

True to Hindu traditions, the magnanimous Indian king spared the life of the surrendered enemy. A peace treaty was signed and Alexander helped Puru in annexing other territories to his kingdom.

Note: The above article is an exact (with very minor changes) reproduction of a twitter thread on Puru and Alexander by Aabhas Maldahiyar.

Aabhas Maldahiyar is an author of three books, a columnist, an urban designer, and an ex-Marxist. ‘Modi Again’ is his latest book.