How Raja Anandpal of Lahore Was Winning Battle against Mahmud of Ghazni and this Happened! 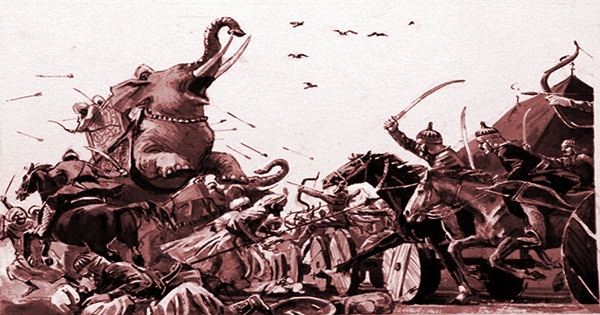 The very utterance of the term Aryavart or Bharat will ship you to an India of yesteryears, the border boundaries of which extended much beyond what we perceive today. The Hindu Sahi kingdom covered eastern Afghanistan, Gandhara of Punjab, and more areas. It reduced to a small kingdom to include parts of Pakistan, Afghanistan and Punjab by the time Mahmud of Ghazni attacked the region in 1001 CE. Jaipal was then the king. Persian historian Firishta described Jaipal as the Raja of Lahore. According to few historical accounts, Waihand was the capital of this Hindu kingdom when Mahmud of Ghazni attacked.

Do you know Anandpal, the Hindu Sahi ruler and Jaipal’s successor, was almost winning a battle against Sultan Mahmud of Ghazni  in 1008 CE? Anandpal had the military support of several rulers from North India. The Hindu alliance wreaked havoc on the Mohammedan army when something happened. There have been many instances when luck favored the enemy forces even when Hindu rulers were winning. For example, Hemchandra Vikramaditya, also called Hemu, defeated the Mughal army of Akbar to become the ruler of Delhi. He was the emperor of Delhi from 7th October 1556 to 5th November 1556, i.e. for a month. And then the Second Battle of Panipat between Hemu and Akbar’s Mughal forces took place on 5th November 1556. Hemu was almost winning the battle when a stray arrow suddenly hit his eye. He became unconscious and collapsed on his elephant. This created panic among his soldiers, who then fled the battlefield. Had he not been wounded by a stray arrow during the Second Battle of Panipat, the History of India would have been different! And a similar incident foiled the victory of Anandpal in 1008 CE!

Anandpal’s father Jaipal gained support of several North Indian rulers, especially of Delhi, Ajmer, Kalinjar, and Kannauj to fight against Mahmud’s father Subooktugeen.  According to Firishta, Jaipal’s army, as a result of the alliance, was so huge that they ‘appeared in extent like the boundless ocean, and in number like the ants or the locusts of the wilderness.’

What led Jaipal seek support of the North Indian rulers? Let us delve a few years back from Anandpal’s timeline. Subooktugeen first attacked Jaipal in 977 CE. Firishta wrote about Jaipal as ‘the son of Hutpal, of the Brahmin tribe’. During those times, Mohammedans repeatedly attacked neighboring Hindu kingdoms. Hence, Jaipal raised a huge army and kept a regular check at the borders. He camped at Bhatinda. It was almost impossible for Subooktugeen to attack Jaipal given the robust defence. What did Subooktugeen do?

Subooktugeen heard about a spring which Firishta described thus, “in the camp of Jeipal was a spring, into which, if a mixture of ordure should be thrown the sky would immediately become overcast, and a dreadful storm of hail and wind arise.”  Subooktugeen entrusted his son Mahmud to carry out the task of treachery – of creating an artificial storm, taking advantage of the spring. In the words of Firishta, “Mahmood having caused this to be done, the effects became visible ; for instantly the sky lowered, and thunder, lightning, wind, and hail succeeded, turning the day into night, and spreading horror and destruction around ; in so much that a great part of the cattle was killed, and some thousands of the soldiers of both armies perished. But the troops of Ghizny being more hardy than those of Hindoostan, suffered less than their enemies.”

Given the huge loss of his army, Jaipal had to surrender. To maintain his sovereignty, he had to pay a huge ransom and fifty elephants. He paid part of the ransom and assured to pay the rest once he reached Lahore. Subooktugeen kept few of Jaipal’s men as hostages until the Hindu king would pay the full amount. The Sultan sent few soldiers to Lahore with Jaipal and entrusted them to bring the remaining ransom amount.

Jaipal did not keep his promise when he reached Lahore. Instead, he imprisoned Subooktugeen’s men. His council of ministers advised the king not to break the promise as that would result in doom. Jaipal did not pay heed to their advice. Instead, he send ambassadors to neighboring kingdoms for military support. He knew Subooktugeen would certainly advance towards Lahore and attack his kingdom. Hence, he was all geared up to fight against Subooktugeen in battle.

North Indian Hindu rulers, especially of Delhi, Ajmer, Kalinjar, and Kannauj extended their military support to Jaipal. They also provided financial help. To quote Firishta, “that on this occasion the neighbouring Rajas supplied troops and money, particularly those of Dehly, Ajmeer, Kalunjur, and Kunowj, whose forces having united in the Punjab, the whole composed an army of a hundred thousand horse, besides an innumerable host of foot.”

Jaipal surmised right. When Subooktugeen came to know about Jaipal’s broken promise, he marched towards Lahore with a huge army. Jaipal, with his troops, advanced ahead. The two armies met on the confines of Lumghan. In the words of Firishta, “Subooktugeen ascended a hill to view the forces of Jeipal, which appeared in extent like the boundless ocean, and in number like the ants or the locusts of the wilderness.” But Subooktugeen considered himself a wolf about to attack a flock of sheep. To quote Firishta, Subooktugeen’s soldiers, “though few in number, were divided into squadrons of five hundred men each, which were directed to attack successively, one particular point of the Hindoo line, so that it might continually have to encounter fresh troops. The Hindoos, being worse mounted than the cavalry of Subooktugeen, were unable to withstand them, and, wearied out by the manoeuvre just mentioned, began to give way. Subooktugeen, perceiving their disorder, made a general assault…”

A vast portion of Jaipal’s territory fell in Subooktugeen’s hands. After Subooktugeen’s death, Ismaeel, his younger son, became his successor. Mahmud, the elder son, claimed the throne after involving in war with his brother and imprisoning him. Ismaeel was imprisoned till death. It was in 1001 that Mahmud attacked Jaipal. Though Jaipal offered stiff resistance, he was defeated. The sovereignty of Lahore remained in Jaipal’s hands against promise of payment of a huge annual tribute. Besides, Mahmud grabbed Jaipal’s wealth and riches.  Jaipal, having failed twice against the Mohammedans, coronated his son Anandpal and committed suicide by setting himself on fire in a funeral pyre.

Subooktugeen had defeated Sheikh Humeed Lody, the ruler of Multan and reinstated him against promise of payment of annual tribute of a huge sum. In 1005 CE, Abool-Futteh Dawood (Sheikh Humeed Lody’s grandson), the ruler of Multan, revolted. He stopped paying tribute to Mahmud of Ghazni. An enraged Mahmud marched towards Multan with a robust army. Dawood sought the help of Anandpal for military support. Anandpal came to his rescue. But the combined army of Anandpal and Dawood could not defeat Mahmud. Dawood negotiated with Mahmud promising to pay a hefty sum besides signing of a treaty which he promised never to break.  While Mahmud was at Multan, Elik Khan, the Governor of Hirat, attacked Ghazni.

As Mamhud was yet to finalize the terms of the treaty and his plan of teaching Anandpal a lesson was yet to be given shape, he left the affairs of the region in the hands of Swukpal and rushed to Ghazni. Swukpal was a Hindu from Peshawar, who was forcefully converted to Islam by one of Mahmud’s generals. Swukpal reconverted to Hinduism and expelled all Mohammedan officers appointed by Mahmud under him. He revolted and claimed independence from the clutches of Mahmud. The Ghazni Sultan sent an army to tackle Swukpal. In the battle that took place between the two forces, Swukpal lost. He was taken prisoner and imprisoned for the rest of his life.

Mahmud defeated Elik Khan and after settling the affairs of Ghazni marched towards Lahore to teach Anandpal a lesson for providing military aid to Dawood. It was 1008 CE. Anandpal immediately sought military aid from neighboring Hindu kings. The Hindu rulers of northern India were fast to respond. Their common objective was to drive away the Mohammedans out of Hindustan.  The Rajas of Ujjain, Gwalior, Kannauj, Delhi, and Ajmer sent their armies towards Lahore.

In the words of Firishta, the Hindu alliance ‘advanced towards Punjab with the greatest army that had yet taken the field.’ Both the armies ‘met on a plain on the confines of the province of Pishawur, where they remained encamped forty days without coming to action.’ More Hindus joined Anandpal’s forces during these 40 days before the war was yet to begin.

Do you know many Hindu women sold their ornaments to help the Hindu alliance with resources. Many Hindu women  from across far off places melted their gold ornaments and donated for the cause. The Gukkur tribe of Punjab and more tribes extended their support to the Hindu alliance. To quote Firishta, “The troops of the idolaters daily increased in number. The Hindoo females, on this occasion, sold their jewels, and melted down their golden ornaments (which they sent from distant parts,) to furnish resources for the war and the Gukkurs, and other warlike tribes joining the army, surrounded the Mahomedans, who were obliged to entrench their camp.”

And the war began. Mahmud involved 6000 archers to the front in an attempt to provoke the Hindu warriors to attack his entrenchments. The Gukkurs taught the archers a lesson. Around 30,000 Gukkurs, whose heads and feet were bare, penetrated wildly into the Mohammedan group of archers. In a few minutes, they slaughtered 5000 Mohammedan soldiers. To quote Firishta, “Mahmood, having thus secured himself, ordered six thousand archers to the front to endeavour to provoke the enemy to attack his entrenchments. The archers were opposed by the Gukkurs, who, in spite of the King’s efforts and presence, repulsed his light troops, and followed them so closely, that no less than 30,000 Gukkurs with their heads and feet bare, and armed with various weapons, penetrated into the Mahomedan lines, where a dreadful carnage ensued, and 5000 Mahomedans in a few minutes were slain.”

The Mohammedan army started reducing in great numbers. The Hindus were almost winning the battle when Anandpal, who commanded the Hindu army, faced an uncontrollable situation. The elephant he was riding on suddenly became unruly from the effects of naphtha balls and flight of arrows towards it. It fled away from the battlefield. This action confused the Hindu army and created panic. They started fleeing too seeing their general and king flee. The Mohammedan army attacked the fleeing Hindu army. In the words of Firishta, “Abdoolla Taee, with six thousand Arabian horse, and Arslan Jazib, with 10,000 Toorks, Afghans, and Khiljies, pursued the enemy day and night, so that 20,000 Hindoos were killed in the retreat.”

According to another account, the Hindu army of Anandpal was commandeered by the ruler of Kannauj. Whoever the general was, Anandpal faced defeat as a result of the incident. After this unfortunate defeat, Anandpal had to pay more tribute besides an increased annual tribute to continue his rulership. Had Anandpal’s elephant not turned unruly and not fled from the battlefield, the History of India would have been different!

History of the Rise of the Mohammedan Power in India, Firishta, translated by John Briggs

History of Kanauj: To the Moslem Conquest, Rama S. Tripathi.

How Rich was India? An Account Through Loot by Mahmud of Ghazni