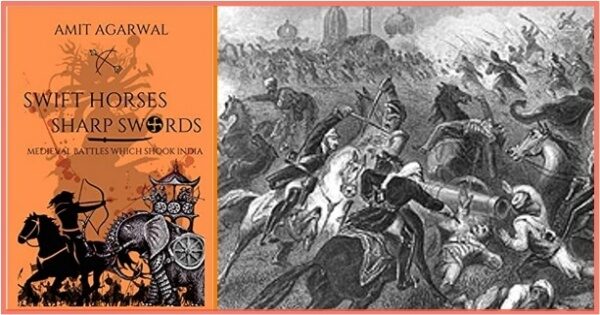 I consented to review the book Swift Horses Sharp Swords: Medieval battles which shook India by Amit Agarwal as it is close to my heart.  Over the past years, I have read multiple books on similar subjects written by Indian and Western authors but this book comes out as the well-researched and authentic compendium of relevant history summarised with a natural authority. The book is obviously written from a different perspective combined with a lot of passion.

Swift Horses Sharp Swords primarily deals with the early medieval era from 7th century till 12th century. Initial few chapters pertain to ancient India which were probably included to delineate India’s political and economic strength and to present a contrast to how a sharp decline commenced after the waves of invasions. Of late, this period has become a very controversial subject. We all have been fed the history with Marxist and secular prism and it resulted in generations of Hindus growing up feeling inferior to their religion and culture. This way, the book tries to correct the bias and presents the history as it actually happened and the reasons thereof. We have always been taught that the Arabic, Turkish and Afghan invasion was a cakewalk for them but after reading the book, I came to know that we were no pushover.

The book has a wide and detailed coverage of the topics of contemporary economy, geography, polity and social structures of India. The author tries to integrate all these factors and find out the reasons for the soul crushing events.

This book is replete with thought-provoking information that is hardly known to the Indians. While reading, it is evident that all the facts are provided in an entertaining way after copious research. It is also a revelation to me that heterogeneous countries have a tough time excelling in various economic and social fronts. The table given in Swift Horses Sharp Swords expostulates that homogeneity is a desired factor for smooth progress. There are other attention-grabbing facts that how geometric mean was used to find out the accurate estimate of the dead in the battle. The importance of Khyber Pass in ancient and medieval India was also stressed and only Sikhs in 17th century could understand the importance of this pass. It was also a surprise that Central Asian horses could travel upto 200 kms per day and hence in mere 3-4 weeks they could descend from Central Asia to Punjab and Delhi. Ghazni and Ghori took only a week to invade as they were based in Afghanistan. The book brings out the aspect of technology by which sturdy Chainmail armour, solid tree saddle and the metallic stirrup were designed and developed in Central Asia. Due to this Turks could accurately fire 6 arrows per minute even while galloping on the horse.

Amit Agarwal, the author, shows his engineering background while combining the fundamentals of game theory, Maslow’s hierarchy, and bell curve to emphasize the reason for survival of Hindus despite the brutal onslaught. He also threw ample light on the Hindu warriors who successfully defended their motherland against the invaders. Many of them are still virtually unknown and unheard. The book is full of such heroes who fought bravely against them but lack of technological prowess had done them in.  The enormity of Indian wealth during the ancient and medieval period which constituted 25% of the world’s GDP in those times, was astounding. There are some unique chapters like why all the battlefields were in Haryana.

Swift Horses Sharp Swords has explained beautifully about how polytheism has always been epitome of tolerance in contrast to monotheism. How monotheism came to dominate other polytheistic beliefs is also elaborately explained. Another chapter “In praise of Idolatry” is also unique and deals with images of deities and why all Abrahamic religions abhor them.

One would also be surprised to know that once Indians ruled all over Asia without even lifting a sword. The book devotes a full chapter to how Cholas built their empire all over south East Asia and their emphasis on building intricate Hindu temples which survive even to this date.

The overemphasis of Dharamyuddha by Indians was one of the main factors in our defeat. Ghori was severely injured and lying on the battlefield unconscious and PrithviRaj could have easily killed him but he was spared as tenets of Dharamyuddha explicitly forbade to kill injured and unarmed. Within a year, Ghori came back to rule over us for centuries.

Swift Horses Sharp Swords also transacts with follies of Hindu religion especially about casteism which has been such a menace in Indian society which prevented people from unifying under one national umbrella in sharp contrast to Islam under which they are ever-ready to lay down their lives.

This book is an exemplary and in-depth work to say the least. The fact that Amit Agarwal has not only researched but also expressed himself in an objective and balanced way is praiseworthy. This makes it a very good material that can even be considered to be used in school and colleges as a text book. Further research can then be taken up by the students to refine their thoughts and opinions. An exhaustive list of references allows you to explore into much deeper levels if a pithy and critical analysis presented in this book does not quench your thirst fully. It is a must read for everyone who feels pride in self or the glorious Sanatani history.

The book has an engaging style, crisp and sharp walking through the details of history and relating to the historical events with contemporary knowledge e.g. network theory, chaos, scatter/randomness etc.  The book will suit everyone whether he is a layman or an accomplished historian. 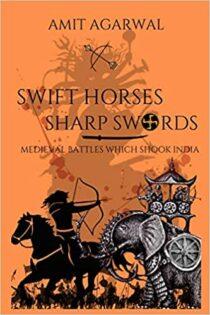 I strongly urge all Indians with an interest in medieval history to read Swift Horses Sharp Swords. Many, many historical cobwebs would be removed from our minds, and how the medieval period more than any other in India’s 5,000 year history has impacted us as a nation today becomes obvious. The churn of the present times in India and its genesis is also better appreciated by reading this book.

An informative, breathless sprint through the causes and consequences of the horrific Indian Medieval era.

Here is an extract from Swift Horses Sharp Swords:

There is another folklore about Somnath though it seems outlandish. Mecca had 3 prominent goddesses Al Lat, Al Uzza and Manat of pre-Islamic era who had an uncanny similarity to the Hindu goddesses. When the Prophet went to Mecca to destroy the idols of gods and goddesses, the idol of Manat was shipped away to the port of Prabhas in India secretly. Soon after, the idol of Manat was established with proper pran-pratishta and later this place was named So-Manat or Somnath.  This was the precise reason why Arabs, Mahmud Ghaznawi and later Aurangjeb were so much after this temple. They hoped that after its destruction, all Hindus would become Muslims on their own accord, a la Meccans. [1]

Being at the coast, Arabic sailors used to see the Somnath while travelling from Sri Lanka and Kerala to Debal (Karachi). They carried the tales of fabulous wealth of the temple to Sindh, Persia & Arab.  The concentration of wealth at Somnath temple was well known and yet, it was not very well guarded. Consequently, it kindled a strong desire in Mahmud and became an attractive target for him. He started planning for a swift attack in the ensuing winters. He wanted to milk India dry till nothing was left and at the same time, he wanted to bask in the glory of being the biggest but-shikan (idol-breaker) in the Islamic world.  Muslims used to respect rulers immensely who killed and subjugated the kafirs and destroyed their property and temples.

Soldiers and people of Gujarat (Somnath) army were fed the false stories that North Indians were conquered by Mahmud because they were not protected by Shiva of Somnath, the greatest of the gods, as they did not have blessings of the Lord. Eventually Mahmud also came to know these stories and then decided to destroy the main temple of idolaters. Temples of Northern India had ceased to be a magnet for Mahmud as the loot of its most prosperous temples was already in his treasury.

Keeping this in mind, he first decided on the best route to be taken. He zeroed on the route through Multan to Ajmer through the Thar Desert of Rajasthan.  He made the maps in detail so that he did not forget the route and end up somewhere else in the desert. He hired 3,000 camels to carry extra water and provisions to see them through the desert.  Every soldier was asked to carry his own water and food. Simultaneously, he also wanted to avoid strongholds of Rajput rulers who could pose any obstacles to him. His focus was very clear. Attack and loot Somnath while avoiding any side skirmishes and then scoot back to Ghazni.

Post monsoon, On 25 October 1025, he started from Ghazni with 80,000 soldiers including 30,000 hard-core ghazi.  This time he wanted to set an example for the kafirs as well as did not want to repeat the failure of the last expedition.

True to his planning, he arrived at Somnath in cool January without any misfortune or encountering any difficulty on the way.  Muslim historians recorded in their treatises that Hindus foolishly assembled on their roofs and ramparts to see Mahmud and his army being annihilated by Lord Somnath for the attacks on pious and innocent Hindus. No miracle of this sort happened though the Hindus’ army defended well in the battle, which lasted for 3 days.  As usual, Mahmud won the battle squarely by killing around 50,000 Hindu soldiers.  The total value of the wealth looted exceeded astronomical 20,000 dinars.

After the victory, Mahmud entered the temple and started desecrating the temple.  However, he was awestruck by the idol of shiv-linga floating in the mid air. Some people stated that it was some sort of hidden support. He then waved his sword above and below the idol to feel for any support. But he could not find any. Then someone told him that the canopy on the top of the idol was made of lodestone and the idol had a sufficient amount of iron in it. The whole set up was so ingeniously designed by the master builders that the idol remained suspended in the air.  He then asked his soldiers to remove the stones in the canopy and lo, behold the idol swerved on one side. When more stones were removed, the idol promptly fell on the floor. He then broke the majestic Shiva-linga with his mace. It was made of pure gold and was 15 feet high. Folklore is that Mahmud was requested not to break the idol in lieu of an offering of enormous wealth. However, Mahmud was not at all interested in such an offer, as he wanted the immortal glory of but-shikan among the Muslims. Such was the hate towards the Hindus that he even took the sandalwood doors of the temple all the way to Ghazni. He thus wanted nothing but the complete subjugation of Hindus.

Somanth’s demolition was the climax of the Muslims’ destruction of the Hindu temples. It was and is still considered a crowning achievement of Turks over the kafir Hindus. Mahmud’s status in the Muslim world was elevated to equivalent of a demi-god. Though temples were regularly destroyed over the next centuries, nothing could match the scale of loot and slaughter of the Somnath.  Mahmud sent the Hindus to an abject dejection which would continue to rankle them for time immemorial.

Along with the temple, it also crushed the heart of India.

Vishnukant Saxena, an engineer and an MBA, works in the leadership team of a large private sector bank. He writes occasionally in English and Hindi.