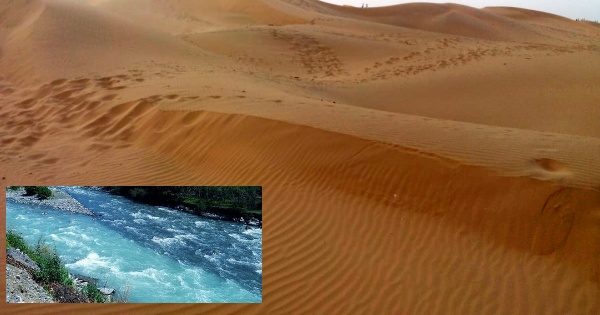 Rivers! What breath is to life is what water is to existence too. Life in many forms, even before human beings appeared on earth, was nourished by rivers and the nourishment continues to this day and will continue till eternity. What is the antiquity of rivers in India? They date back to thousands and lakhs of years. There has been abundant research on the Saraswati, now a lost river, which once flowed between the Yamuna and the Sutlej through the northwest parts of India and eastern Pakistan. This river finds mention in ancient Indian texts, especially the Vedas; hence it is also called Vedic Saraswati River. According to the book Chronology of India by Vedveer Arya, the Vedic era flourished for several thousand years starting around 17000 years ago. Satellite images and various evidences have proved the existence of this river and its geographical location matches with its description in the Rigveda.

Recently satellite imagery led to the discovery of ‘a dense network of river channels crossing the Thar Desert’. Researchers and scientists, in their study, found the existence of a river in the central Thar Desert, dating back to 1,72,000 years!  The researchers involved in this study are a joint team from The Max Planck Institute for the Science of Human History in Germany, Anna University in Tamil Nadu, and Indian Institute of Science Education and Research (IISER) Kolkata. Further deep research will lead to unearthing of a lost civilization!

In India, rivers are revered as Goddesses with exception of the mighty 3000 plus km long Brahmaputra, considered as masculine. According to Puranic History, Brahmaputra was the son of Brahma. Few more small rivers, mainly small tributaries, are also accorded as male. The major rivers, categorized under Himalayan and Peninsular, either fall in the Arabian Sea or the Bay of Bengal or join as tributaries and end in major rivers. These rivers originate from four main watersheds, viz. the Himalayas and the Karakoram, the Western Ghats or Sahyadri, the Aravallis and the Vindhya/Satpura ranges and Chotanagpur plateau. The Ganges that originates in the Gangotri Glacier, Brahmaputra in the Angsi Glacier of Tibet, Godavari in Triambakeshwar, Krishna near Mahabaleswar, Mahanadi in the hills of southeastern Chhattisgarh, Kaveri in Talakaveri – all fall into the Bay of Bengal. The Indus originating in the Kailash Range of Tibet, the Narmada in Amarkantak, Tapti (Tapi) in Satpura Range near Multai, the Sabarmati in the Aravalli Hills near Udaipur – all fall in the Arabian Sea. While the Yamuna that originates in the Yamunotri Glacier joins the Ganges, Sutlej originating in Lake Rakshastal in Tibet joins Indus, Chambal originating in the Vindhya Range near Mhow ends in Yamuna, Beas originating in Beas Kund ends in Sutlej, and Tungabhadra starting at Koodli joins the Krishna River. There are also rivers that have inland drainage, mainly in the arid parts of the Thar Desert, the northern parts of the Aravalli Mountains and in parts of Ladakh. Thousands of towns and cities get nourished by these rivers. Did this new-found ancient 172000-year-old river nourish our ancestors in pre-historic times?!

According to the news highlights published about the discovery of this ancient river in Rajasthan in India Times titled “A River That Was ‘Lost’ Some 172,000 Years Ago Has Just Been Found In Rajasthan’s Thar Desert”, “these findings predate evidence for activity in modern river courses across the Thar Desert as well as dried up course of the Ghaggar-Hakra River”. The article report further highlights noting by the researchers “that the potential importance of ‘lost’ rivers for earlier inhabitants of the Thar Desert have been overlooked”.

The Thar Desert, the 17th largest in the world, covers 85 percent of area in India and 15 percent in Pakistan. Out of these 85 percent, Rajasthan covers 60 while Gujarat, Punjab and Haryana covers the rest 25 percent. The 172000-year-old river was discovered at Nal Quarry in the Bikaner area of the Thar Desert in Rajasthan. This area is around 200 km away from the nearest existing river. A deep deposit of river sands and gravels was discovered during a quarrying activity here. The team of researchers studied the different deposits of river sands and gravels besides considering other factors including results of satellite images to come to a conclusion.

According to the research study of the fluvial deposits, the desert landscape that we notice today was ‘distinctly different’ in ancient times. It might be a green fertile area where ‘Stone Age populations lived’. To quote India Times, “These findings predate evidence for activity in modern river courses across the Thar Desert as well as dried up course of the Ghaggar-Hakra River, the researchers said”. The research study suggests that the river activity in this region occurred around 172 to 140 thousand years ago.

The 172000-year-old river running through the central Thar Desert is indicative of the flourishing of an ancient civilization along its banks. It was an active river system. Migrations to this region might have taken place and the reverse probably happened when the river dried up. To further quote India Times, “The presence of a river running through the central Thar Desert would have offered a life-line to Paleolithic populations, and potentially an important corridor for migrations, they said”.

The findings suggest the now arid region once brimmed with life. Jimbob Blinkhorn from The Max Planck Institute for the Science of Human History said, as quoted in the India Times, “The Thar Desert has a rich prehistory, and we’ve been uncovering a wide range of evidence showing how Stone Age populations not only survived but thrived in these semi-arid landscapes…..We know how important rivers can be to living in this region, but we have little detail on what river systems were like during key periods of prehistory.”

Could this pre-historic 172000-year-old river be also the Saraswati? Only further research will tell!