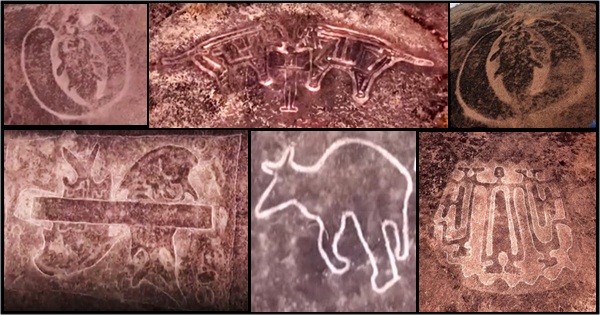 Recently, on Oct 1, 2018, the BBC ran a story[1] about the discovery of hundreds of petroglyphs i.e. rock carvings in the Ratnagiri and Rajapur area of the state of Maharashtra in western India. Many of these petroglyphs are very large, which have been etched on the rocky, flat hilltops. 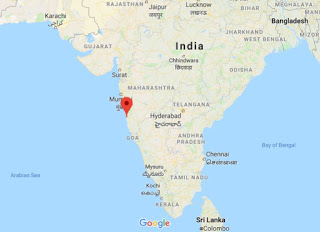 “Our first deduction from examining these petroglyphs is that they were created around 10,000BC,” the director of the Maharashtra state archaeology department, Tejas Garge, told the BBC. This puts the date of creation of these images at the very dawn of civilization, when humanity emerged from the cataclysms of the Younger Dryas Period and the end of the last Ice Age.

While some of the petroglyphs were known to the locals and regarded as holy, most of them were hidden beneath layers of mud and soil deposited during the intervening millenia. They were discovered due to the diligent efforts of a group of explorers led by Sudhir Risbood and Manoj Marathe, who began searching for the images in earnest after observing a few in the area.

When I looked at these pictures, I was astonished to find 3 images which depict sacred symbols of global importance, which have been found in the art and culture of many subsequent civilizations.

This large petroglyph depicts what appears to be the Winged Scarab, a symbol that was very popular in ancient Egypt and symbolized creation and rebirth. The symbol appears on Egyptian tomb paintings, carvings, and manuscripts. Miniature scarabs carved from stone or moulded from faience were worn as amulets and jewelry, and used as impression seals.

The Egyptians called the scarab beetle Khepri (“He who has come into being”) and worshiped it as the “dawn sun”. There is a story of how the goddess Isis tricked the sun-god Ra into revealing his many names: Khepri (dawn sun), Ra (mid-day sun) and Atum (evening sun).

Just as the scarab beetle pushes or rolls a ball of dung across the earth, Khepri pushed the sun across the sky every day.  The ancient Egyptians believed that Khepri renewed the sun every day before rolling it above the horizon, then carried it through the other world after sunset, only to renew it, again, the next day. This reinforced the scarab’s association with creation and rebirth.

The visual similarity between the petroglyph discovered in India, and the Egyptian symbol of the Winged Scarab or Khepri is quite striking. Although the “sun-disk” being pushed by the scarab is not very clear in this image, it can be easily made out from the aerial view shown below. 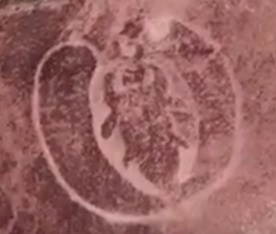 It boggles the mind to think that the Winged Scarab symbol, which was so popular in ancient Egypt, has been existence since the very beginning of the post-glacial epoch. Did the symbol have its origin in ancient India? Or does it reflect the esoteric knowledge of an erstwhile “Golden Age” civilization that perished during the cataclysms of the Younger Dryas epoch (10,900 BCE – 9700 BCE) when our planet was struck by multiple fragments of a giant comet?

It is now well known that Younger Dryas comet impact initiated a vicious cold snap, accompanied by fires, floods, and black rain, which brought about the extinction of a large number of North American megafauna and a prehistoric culture. In 9703 BCE, the cold snap ended as abruptly as it had started, for reasons not clearly understood. The sudden transition out of the Ice Age to a warm interglacial climate may have precipitated a global flood of mythic proportions, which is recounted in the flood legends of many ancient cultures.

The Master of Animals

Another exquisite petroglyph discovered at the Indian site depicts a man who appears to be holding two animals by their hind legs. This is a symbolic motif in ancient art that is commonly referred to by scholars as the “Master of Animals” or “Lord of Animals”.

The Master of Animals is a deity entity or heroic figure who is the ruler of the forest and master of all animals. The figure can be male or female (in which case she is called Mistress of Animals), and is generally shown grasping two wild animal with both hands.The symbol suggests that the person (god or hero) is of immense strength and is capable of taming wild beasts. 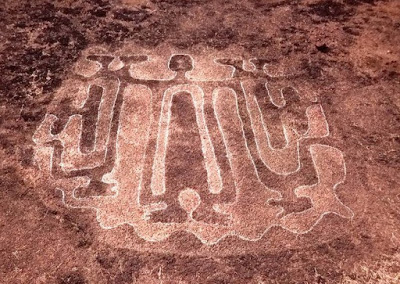 Figure 6: Petroglyph in Maharashtra depicting the Master of Animals

The symbolic representation of a person holding a pair of animals by their hind legs or tails, was widespread in the Near East and Egypt. One of the earliest representations can be seen on the Gebel el-Arak Knife dating from the Naqada II period of Egyptian prehistory, which began c.3450 BCE. The “Mistress of Animals” motif appears in Archaic Greek and Etruscan artworks in metal, ivory, pottery and jewelry from the 8th century BCE. 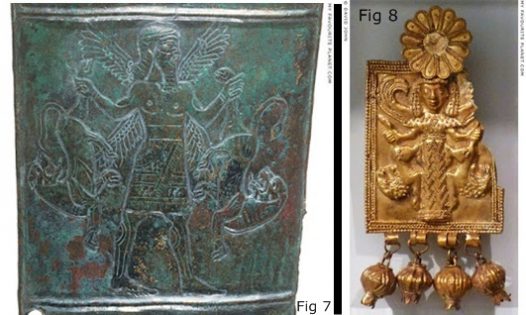 Another Ratnagiri petroglyph shows the Master of Animals grappling with two large animals, possibly tigers, which is reminiscent of an imagery depicted on a number of Indus Valley seals from c.2600 BCE. 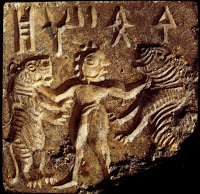 The depiction of this widespread symbolic motif on 12,000 year old Indian petroglyphs suggests that the symbol had its origin in remote antiquity. But, how did such complex esoteric concepts and associated symbolic imagery appear at such an early age? This, surely, could not have been the work of primitive hunter-gatherers, as the researchers in this study have speculated. One wonders who carved these remarkable petroglyphs, and for what purpose.

Another intriguing petroglyph discovered at Ratnagiri depicts a pair of fish facing opposite directions, connected by some kind of a strap. This symbol has been used for thousands of years to depict the Pisces constellation. The Pisces astrological symbol consists of a pair of fish swimming in opposite directions, with a chord connecting the two fishes so that they remain together.

As per current wisdom, the earliest representation of the zodiac sign of Pisces appears on an Egyptian coffin lid from c. 2300 BCE. It is also believed that knowledge of the zodiac signs and astrological predictions began sometime during the Bronze Age in Mesopotamia.

However, the discovery of this petroglyph changes all of that. It pushes back the date for the origin of astrological symbols to the period around 10,000 BCE or earlier, and raises the very real possibility that our astrological knowledge is a legacy of a lost civilization that flourished during the Ice Age. It is possible that some of the other hundreds of petroglyphs discovered in western Maharashtra area may describe other symbols of the zodiac.

The very fact that the petroglyphs of Ratnagiri have been dated to c.10,000 BCE, when humanity had just emerged from the terrible devastation of the Younger Dryas epoch, suggests that these symbols may not have been “devised” by the people who carved them. Rather, they might encapsulate the esoteric wisdom of a “Golden Age” civilization that flourished during the Ice Age, and which perished during the Younger Dryas cataclysms.

The survivors of this “Lost Civilization” would have settled at many places around the globe, and one of the settlement zones was the Konkan coast of India. Having witnessed their erstwhile civilization being reduced to rubble, the survivors may have refrained from building large monuments. Instead, they etched their sacred symbols on the hard, rocky landscape, which could have transformed into open-air altars.

One of the mysteries of the Ratnagiri petroglyphs, which the BBC report has pointed out, is that they show animals such as the hippopotamus which is not indigenous to Africa. I noticed that there are at least two petroglyphs that looks like a kangaroo! It is well known that the kangaroo is indigenous to Australia, and are not found anywhere else.

This begs the question as to how the people living here depicted animals that are not indigenous to India. Did these people have oceanic contacts with Africa and Australia? Could it be that the hippo and the kangaroo were found in India 12,000 years ago? Or could there be some other explanation for this anomaly?

It is at times like these that we should pay more attention to the legends of our ancestors. Tamil traditions tell us of an antediluvian island-continent called Kumari Kandam that once existed in the Indian Ocean. However, at the end of the Golden Age, Kumari Kandam was “swallowed by the sea”, and large tracts of the island-continent were lost to the ocean. N.Mahalingam, the Chairman of the International Association of Tamil Studies, has dated this inundation to c.9564 BCE. [2] This is very close to the end of the Younger Dryas epoch which ravaged our planet for an extended period from 10,900 BCE – 9600 BCE.

Perhaps, the ecosphere of Kumari Kandam supported animals such as hippos and kangaroos, and when the island-continent sank under the ocean, some of its inhabitants settled on the western coast of India and etched their memories of their erstwhile homeland on these flat, rocky hill tops?

Overall, these ancient petroglyphs have the potential of completely overturning the current beliefs regarding the origins of civilization. There are hundreds of petroglyphs in the Ratnagiri area which depict animal and human figures, as well as complex geometric forms, which could help us unlock the mysteries of humanity’s past.

Earlier in 2012, nearly 60 petroglyphs were discovered in the Sindhudurg district of Maharashtra in the Konkan (coastal) region, which were tentatively dated to between 7000 BCE – 4000 BCE.[3] One of the images found here resembles the “Imperial Eagle” symbol which has served as a symbol of royalty and has been displayed on the Coat of Arms of many nations throughout history.

It is evident that the petroglyphs of the Konkan region of Maharashtra contain some of the earliest depictions of the sacred symbols used by cultures across the world. A proper exploration of these images is vital for discovering the ancient roots of our civilization, which have been lost in the mists of time.

This article was first published at the author’s personal blog bibhudevmisra.com.

Bibhu Dev Misra is a graduate of IIT-IIM and an independent researcher and writer on topics related to ancient cultures, sacred wisdom, symbols, science and religion.

8,000 Year Old Shivlings in Israel; Aristotle Had Said Jews Were from India