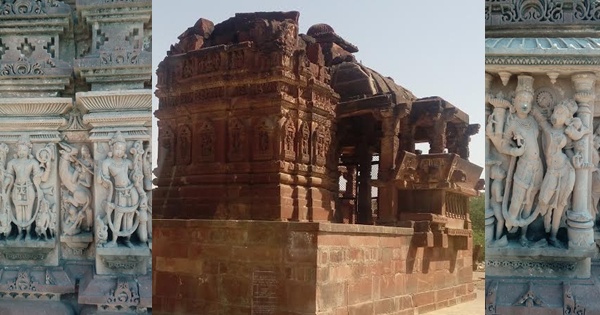 You will feel the essence of this ancient city and robotically get transported to its ambience as you step your feet in the territory of Osian. The hustle and bustle of the Guptas, of the Gurjar Pratihars, Parmars, and of Jain rulers will echo in your ears as you explore this township, located 65 km away from Jodhpur, Rajasthan.

This city flourished since 320 BCE with several successive dynasties imprinting their mark. Over time, each dynasty created architectural marvels; those from the 8th century have survived the ravages of time, forces of Nature and destruction by invaders.

Muhammad Ghori attacked Osian in 1195 with his Turkish and Muslim armies leading to fleeing of the residents. The invaders killed whoever they came across besides looting their properties. They razed architectural marvels and temples to the ground. Later the invaders left. But the people did not return. The city remained deserted for some time.

I and my husband Yogaditya Singh Rawal had been in Jodhpur for the last two days. Exploring the royal city was a delight for us. The drive by our Mahindra Thar from Ghaziabad to Jodhpur wasn’t hectic, as we drove in turns. The March sun, though pleasant in the morning, was harsh on us during the day, while we walked around and delved into the details of the historical legacies left behind in the structural splendors. 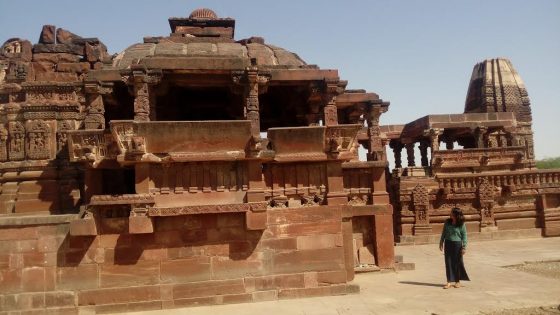 Given the physical location of Osian, an oasis in the western Thar Desert, we did gain an advantage of also reveling on the exquisiteness of Nature draped in sand. This third day in Jodhpur in Osian was a blessing for us!

Greenery to the zenith was what we often explored in countless tourist spots, both explored and unexplored, across India. Variegated Nature always delighted us. But Rajasthan, in this 65 km drive from Jodhpur to Osian, gave us a pleasant surprise. Nature was different here, her majesty exhibited amid aridity with sand plateaus welcoming us every now and then from either side of the road. Scanty green vegetation at times further enhanced the daintiness of the region.

And we entered Osian. As I have mentioned at the very beginning, we got transported to the bygone era at once at the very view of a group of three big abandoned temples and few very small temples. These temples, located on a side of the road at the entrance of Osian, are left on their own. My husband parked the Thar near one of the temples.

As we walked in, our eyes remained wide open in amazement and our hearts filled with gratitude for the masons, architects, laborers who have built the structures. We asked a local passerby (who seemed to have enough knowledge about the heritage of his town) about the temples, standing out in their grace and architecture. 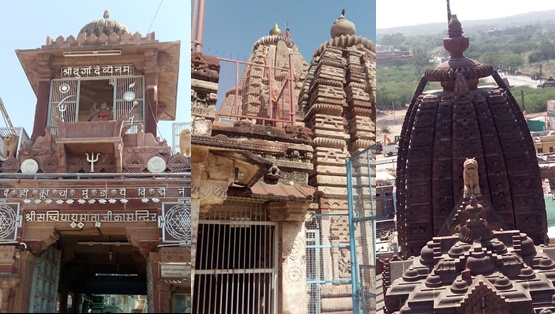 He only felt delighted to help us know about the shrines. According to him, these temples are dedicated to Lord Harihar, a union of Lord Shiv and Lord Vishnu.

This group of temples was built by the Gurjar Pratihars in between the 8th and 11th centuries. Raised on huge plinths with roughly every space sculpted to its best, these structures unfold the royal legacy of past. According to the passerby, there were numerous temples out of which 18 shrines have survived destruction by Mohammed Ghori and the ravages of time.

These standing structures stand testimony to a glorious past and speak volume about our rich heritage. The passerby gave us more info about Osian. A cemented board near the shrines threw more light about the temples.

Sachchiya Mata Temple of Goddess Shakti is visited by thousands of devotees including Jains from across the country every day. The 1200 year old temple attracts lakhs of visitors during Navratri.  He advised us to park our Thar at the parking lot, located around 100 steps away from there. We thanked him and followed his advice. 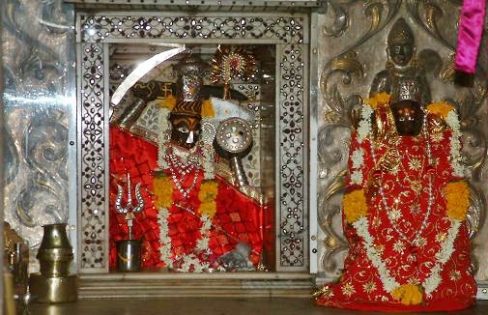 We could feel a divine aura permeating the vicinity as we started climbing the stairs of Sachchiya Mata Temple, located in a small hillock. Some 60-70 steps and we reached the top followed by few more steps to reach the shrine. We were destined to visit the shrine of Goddess Shakti in her Sachchiya Mata avatar.

The temple has been well maintained. Carvings on the walls are somewhat similar to those of Khajuraho. No wonder Osian is called the ‘Khajuraho of Rajasthan’! 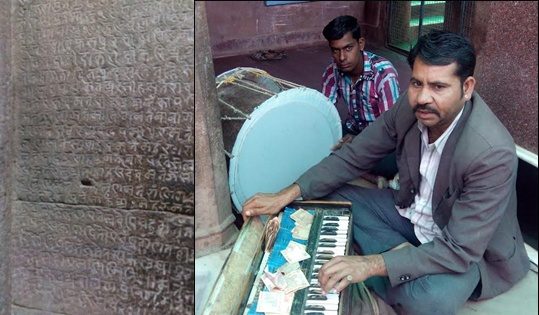 An inscription; local artists within the temple premise

A Sun temple dedicated to Surya Dev with the sanctum containing an idol of the Lord and main hall having idols of Lord Ganesh and Goddess Durga, is merged into the complex of Sachiya Mata temple. We had been to numerous historical sites across the country including Khajuraho. We did come across numerous sun temples. This proved the fact that unlike today, Sun God was worshipped as a principal deity in the bygone days.

Upendre, a Parmar king built the Sachchiya Mata Temple for his Kuldevi (family deity) in the 9th century C.E. Carvings, statues, and paintings in this temple seem to whisper in our ears as we gazed at them. Our souls understood what they said corroborated by the inner happiness we experienced. Maybe our material bodies could not visualize or feel the unfathomable! 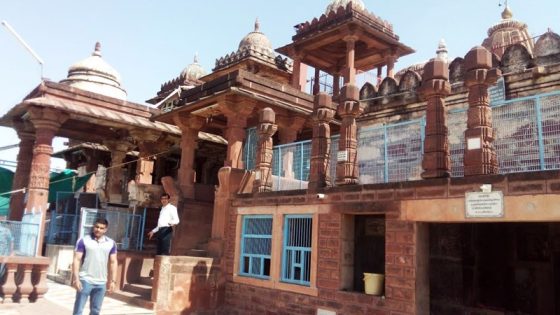 Another attraction of Osian on the western outskirts is a Jain group of temples comprising of one main temple with seven other smaller temples and a dharmshala. The architecture, depicting the life story of Bhagvan Neminath, the twenty-second Jain Tirthankar, is a feast for the eyes. The red stones rendering life to the walls and pillars looked bright under the sun.

We fell in love with the carvings and sculptures on the walls and pillars. A statue of Lord Mahavir, 32 inches high, in the padmasan posture, is placed on a high platform made of sandstone.

With our mind and camera capturing every moment, we walked towards the parking lot. The guard there advised us to visit the Osian desert, located four km inwards via another road. We listened to him.

Our GPS, as always, took us to the spot. We enjoyed moving around in the desert under the scorching sun for some time. We had visited the Thar desert in Jaisalmer two years back; Osian is quite smaller compared to that. All the while, the architectural marvels we visualized were our subject of discussion. Truly an architectural lotus blooming in the desert! 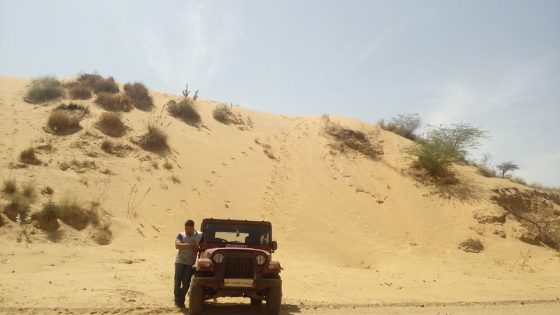 After some time we set out from there towards Kiradu, another heritage spot that speaks volume about the glory of our Indian ancestors, of kings and people, of lifestyle and culture, and lots more that we all have inherited! 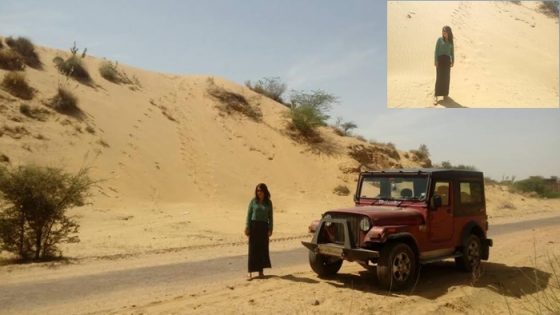