NEP 2020: A Reflection of Chhatrapati Shivaji’s Vision of Swarajya 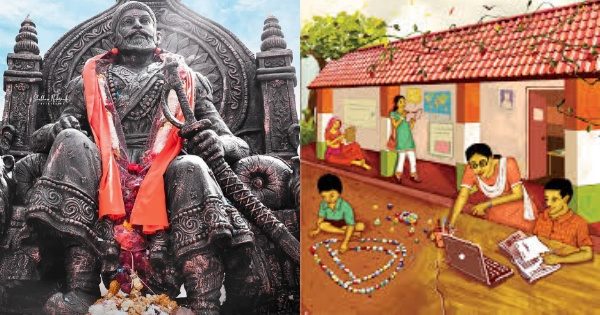 Is the NEP 2020 a vision of Swarajya? We all remember Chhatrapati Shivaji Maharaj (henceforth Shivaji) for the fierce Hindu Warrior that he was, the one who stood like a rock against the Islamic marauders and plunderers: for establishing self-rule in the heartland of India uniting people from all tribes and clans under a common banner of Hindavi Swarajya.

At this juncture, putting the record straight, there’s more to Shivaji but the saffron, the sword and the moustache, the nitwits of the so-called  ‘righteousness’ failed to identify for themselves, leave aside educating their progenies. One such fact is the profound and prolific love that Shivaji had for language, literature and culture.

History is evident that Shivaji accorded an eminent emphasis to the use of language in his administration and kingdom for he believed that a language brings its own distinct thought process and culture along with it. If there is no language of its own in the establishment, then there isn’t much of swarajya (literally: self-rule). Scholars of swarajya were asked to prepare a lexicon of around 1400 words to be used in the day-to-day administration, called, ‘Rajya Vyavhar Kosh’. This was done to ensure that Marathi words extracted from Sanskrit replace the Arabic-Persian jargons pervasive in the administration. This should be a clincher for any political or a bureaucratic dispensation or both, for most of them are yet oblivious of the fact that despite all the bravado and brouhaha created around the Marxist historians, Shivaji with his glorious model of administration and reforms is still at the docks of the history. The epoch of Indian administration imbibed with indigenous values and ethos in vernacular is yet to find its due in the administrative rungs, plus the educative curriculum.

Ironically, the system of rule and polity that took root post-independence saw our indigenous languages, mores and way of life being sacrificed at the altar of politics. Indian languages didn’t see the progress they should have even in their own respective states. English has continued to dominate the scenario as the language in chief of the state machinery at all levels. Languages like Hindi, Assamese, Tamil, Telugu, Kannada, Gujarati and others, that are rich could not become the language of governance and administrations even within the boundaries of the state owing to the excessive importance accorded to English and the false pride associated with knowing and speaking it.

Notwithstanding the great weight that Gandhiji laid on the use of Hindi for the country’s official work, Hindi failed to emerge from the constraints of the “Hindi Week” observed once a year. And as fate would have it, India’s first Prime Minister was truly comfortable only in English, not in any other language. English was the language that he spoke, lived and breathed throughout his life and particularly in his tenure as India’s PM. This is the reason I attribute to the fact that English has become an inseparable part of our policy and discourse.

To be fair, political freedom in India was never followed by the freedom of choosing our own system of governance and administration. It doesn’t amuse the one that the departments of Administration, Police, Finance, Justice, Education, etc have remained more or less as they were during the British period. The language and attitude of the entire administration is no different from its colonial predecessor. The language left by the British, which after all is a foreign language, has continued to rule the roost. The tussle Hindi and its sister languages ought to have fought tooth and nail with English then broke out between themselves, as a result of which English made itself acceptable as the only lingua franca.

The state that came into being after 1947, lacked its own language, which has become one of its serious weaknesses. Instead of simple and easy to understand words, Hindi was burdened with cumbersome words and phrases, putting the very language to ridicule, which is exactly what the elite ruling class desired. There exists a self-styled progressive segment in society which looks down upon the restoration of the ancient and the glorious names of places and cities. Interestingly, as per the Indian science of languages, a name is a set of syllables, and the syllable represents the Supreme One. The proper use of a word is, therefore, must! It is imperative of any self-respecting society and people to restore the earlier names of the places and cities which were changed by the enslavers and imperialist powers.

Yes, this article is not about Shivaji and his policies. Not entirely! NEP 2020 (National Education Policy 2020), since its inception from the good old days when its draft seemingly unpragmatic was released and to its declaration hitherto, there has been a lot hullabaloo by the intellectuals having left leanings. In the garb of professing liberalism, progressiveness and secularism, per se, the self-proclaimed crusaders of the cause, the champions of literary festivals and the wine sipping Intelligentsia mistakenly expunged the fact that the curriculum so adopted must include basic arts, crafts, humanities, languages, literature, culture, and values, in addition to science and mathematics, to unleash all the aspects and capabilities of a learner; and make education all the more appealing. Inculcating Indic knowledge and its diverse social, cultural, and technological needs, its matchless artistic, language, and knowledge traditions, and its strong ethics in India’s youth is considered critical for purposes of instilling national pride, self-confidence, self-knowledge, cooperation, and integration.

As per NEP 2020, ‘the central principles guiding both the education system at large, as well as the individual institutions within it includes promoting multilingualism and the power of language in teaching and learning; extensive use of technology in teaching and learning, removing language barriers, increasing access for physically challenged students, and educational planning and management; respect for diversity and respect for the local context in all curriculum, pedagogy, and policy, always keeping in mind that education is a concurrent subject; a rootedness and pride in India, and its rich, diverse, ancient and modern culture and knowledge systems and traditions.’ The new policy also ‘envisions an education system rooted in Indian ethos that contributes directly to transforming India, that is Bharat, sustainably into an equitable and vibrant knowledge society, by providing high-quality education to all, and thereby making India a global knowledge superpower.’

The need today is to resuscitate our cultural values, our languages and literature and re-establish them firmly in our governance and administration, the way Shivaji did back in his age. That’s where the NEP 2020 will come handy. The education policy of a country is the triggering factor for the innovation and invention. Take Germany as an example as it is has reached an epoch in the past few decades. Their Basic Law of 1949 grants every German citizen the right to self-fulfilment .i.e. citizens are able to choose the type of education they want and are given access to their preferred occupation or profession in their regional and local languages. The goal of educational policy is therefore to provide each citizen with opportunities to grow personally, professionally, and as a citizen in accordance with his or her abilities and preferences. Results are self-explanatory to the world.

This article was first published at Trunicle.