What Vedas and other Ancient Hindu Scriptures Tell Us about Cow 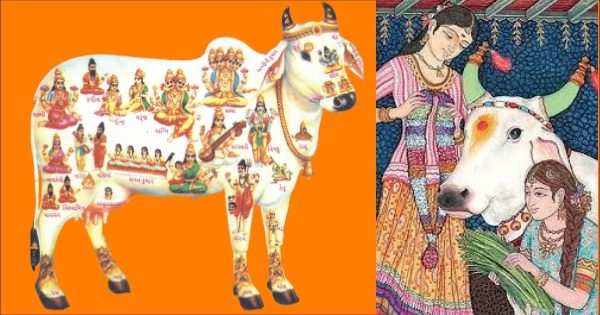 In Hinduism, animals hold a great respect. The Hindus believe that everything is created by the creator and the creator resides in everyone; all in one and one in all. That’s why, we can easily see the Hindu deities in form of animals or with animals. Also, we can learn so many things from an individual animal.

According to the Vedas, among all the animals, Cow is an ideal animal in Brahma’s creation. It is said that cow is an adobe of Hindu Deities and treated as the highest and the most sacred animal. It is a symbol of compassion and ‘Universal symbol of Motherhood’.

According to the great sage Parashar, Brahma divided two parts of the same clan – one-part cow and one-part Brahmin. Mantras are distinguished among Brahmins and Lakshmi is distinguished among cows. Therefore, all yagyas have a reputation from cows. Kamdhenu has been praised by Brahma, Vishnu and Mahesh in Skandpuran as:

The cow is considered the most revered in our Sanatan Vedic culture. Cow gives us everything, milk, health, wealth and cereal. For this reason, cow is considered as mother in Hindu tradition. In the Rig Veda, the cows sometimes symbolize “light” and “rays”. Aditi, the supreme Prakriti/Nature force is often described as a cow, and the Deva, the supreme soul is described as the as a bull in Rig Veda. The belief is that one can attain salvation (Moksha) by worshipping the Cow and serving her.

What do the Vedas say about the cow? As per the Atharva Veda, 33 crore Deities reside inside the cow. While describing the Divine form of cow, Bhagawan Shree Krishna said, ‘धनूनामस्मम कामधुक’, meaning: ‘I am whatever Kamdhenu is, for all the usual milk giving or in the normal sense’.

In the ancient Rishikuls, serving cow was compulsory along with serving Gurus (teachers).

Atharva Veda 4-21-5: Cow brings well-being and purity in the house. She is a source of wealth and prosperity.

Manu Samhita, Chapter 4, Verse 162: A guru, a teacher, a father, a mother, a brahmana, a cow and a yogi all should never be killed.

In Dwapar Yuga, Lord Krishna and Balram spearheaded the “Cow worship and preservation” culture. Many Rishis from ancient time has expressed this unique sanctity in their work. We must realize how nicely Hindu Dharma has described the importance of looking after cows. This mere act of Shree Krishna was to show us that if we don’t take care of cows, we will lose our sanctity.

Festivals related to cow are Bachvaras (Vasubaras), Dhanteras, Balipratipada or Padwa. During these festivals, cows are ceremoniously worshipped. Not only cows, but bulls are also worshipped in festivals like Pola.

Panchagavya is a cow derivative consisting of five ingredients – gomay (absorbs the heat), gomutra ( heals), milk (easy to digest and is not fattening), yoghurt (destroys vaat and increase strength) and ghee (beneficial for eyes and wound). It is considered as an extremely pure medicine.

Meaning: Panchagavya is a very pure chemical. It is healthy when included in the diet, gives happiness to the heart, increases lifespan, strength and intellectual capacity. It is the destroyer of the three doshas. It also destroys all impurities and disorders of the blood. It can cure cardiovascular disorders. All physical, mental and psychological problems can be overcome by its use.

It is said that gomutra can cure leprosy, fever, asthma, certain allergies, peptic ulcer, liver ailments, kidney disorders including certain skin problems and even cancer. We can use cow dung in many other ways like organic fertilizers, pesticides, fungicides, insecticides, biogas, etc. It also has anti-bacterial properties so; it is used to protect walls and floors of houses in the villages.

Cow is the only animal, which emits major amount of oxygen as its lungs doesn’t absorb oxygen with much efficiency. It is used in Agnihotri. If one spoon of pure ghee is poured on the burning cow cakes dung (fuel) then they can produce a good amount oxygen, therefore ghee made with cow milk is used in sacrificial fires and havans. What can be the better method to deal with the air pollution?

India has approximately 30 crore cattle. Using their dung to produce bio gas, we can save 6.0 crore ton of firewood every year and this will help to deal with deforestation and soil erosion along with many environmental issues. Indeed, cow is one of mankind’s most valuable resource and truly, our mother.

A BDS student, Akanksha Aditi is a micro influencer on social media, a social media activist, content creator. She also worked as a coordinator for NGO 'Youth Against Rape'.