From Christianity to Niam Khasi: My Story of Ghar Wapsi (Reconversion) 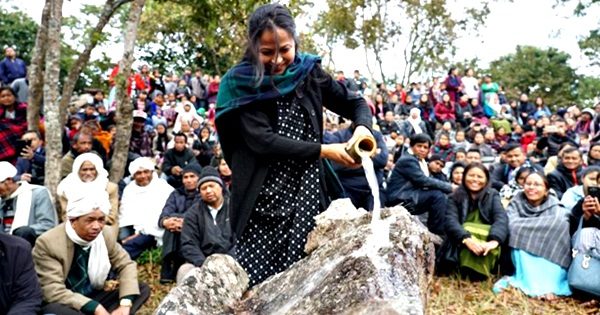 No, it’s not the immediate “Ghar Wapsi” effect; nor has the Rashtriya Swayamsevak Sangh have an impact in my life. My decision to leave the Christian faith and return to Niam Khasi didn’t just happen because of a few negative conversations, or a few isolated events — my decision was made because I realized I’ve been staying in the “wrong house” all these years. Two years ago, there would be no way in fiery hell that I could ever conceive of leaving the Christian faith. But here I am today.

I have received a lot of mixed reactions from being honest about my religious beliefs. For over a year, I had been terrified to tell anyone that I wasn’t a Christian anymore, because I was afraid of all the relationships I would lose, and all the people that would distance themselves from me. To me it feels like there’s a tremendous stigma in a lot of Christian circles about people leaving the church, and this assumption that I’m not a good person, or a person Christians can be friends with, because my views are now so different. 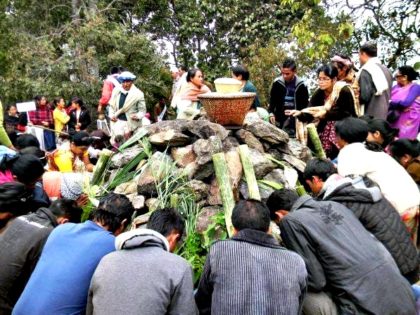 I was really scared of telling people. What I started to realize though, is that people had been distancing themselves because of my religious views, and that I didn’t want those kind of people in my life. I would rather be friends with people who would love me, regardless of my religious beliefs. And I am very happy and grateful to say that I do still have friends that are Christians, and our beliefs and views are very different, but that hasn’t had an effect on our friendship. That was very huge and important to me, Other people have, yes, chosen to distance themselves from me, or let our friendship “fade away” or have told me they were disappointed in me, or even worse, call me a hypocrite or tell me I’m going to hell, or try and “re-convert” me.

A lot of Christians I know have used the bible to justify slavery. And I have no idea how to interpret the stories in the Bible where God commands people to commit genocide, or God destroys populations and wipes out cultures, and tears entire cities to the ground, or floods the world sparing only one family and a bunch of animals. But even fast-forwarding to today, it feels like so many Christians I met were content to pick-and-choose the parts of the Bible they would follow.

There is a clear double standard in many Christian denominations in this Christian State, and because of that, churches are actually not a place for fellowship for everyone. One person told me, in a conversation we were having about abortion and human rights, that if a child gets raped, she has to keep the baby. I know that these attitudes are reflective of the extreme and fundamentalist side of religious belief, but regardless, these were people I personally knew and connected with that said this to me, and I never thought I had come from a place and had relationships with people who could demonstrate such intolerance.

Morally and ethically, I cannot follow a religion that would advocate such hate, judgment, and ignorance. I know that a lot of Christians do a tremendous deal of good things in society, and advocate on behalf of many oppressed people, but I still really sorely miss the critical conversations where these double standards exist in the Bible, the interpretation, and how that enacts itself in the world, and wish for more Christian leaders to speak about these issues. So maybe it should be up to me to fix the church, but it got to a point where I started to realize this kind of hate is larger than just a problem that needs to be fixed, but that it is ingrained into a really big part of Christian culture in the so-called “Christian State” of Incredible India.

So many church denominations are content to split up if they disagree; people believe so strongly and fervently in their interpretation of the Bible that they would sooner split up their church denomination than actively dialogue and try to understand one another. And for all of the things I can do, I cannot go up against that kind of strength of belief — to many, it is church doctrine, and not something that simply changes.

But why did I decide to return home to Niam Tynrai? I could recall the time where I “was moved by an overwhelming presence” during a climb to Lum Sohpetbneng, where everything felt very different, and I clearly felt a “sacredness” to everything and everyone gathered there. I could feel that “holy presence” every time I’m at the sacred Lum Sohpetbneng, and I can never seem to forget that feeling. But I believe I’m not the only one. There are a lot of Khasi Christians out there who weren’t given a “choice”. 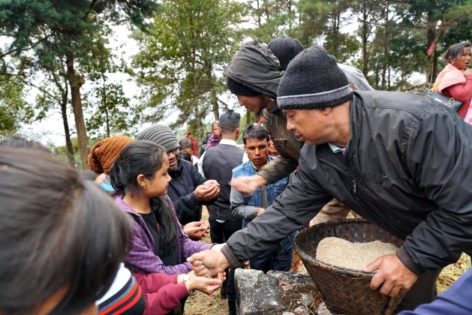 The consecrated rice grain distribution to the devotees after the ceremony; image by Pankaj Deka

There seems to be an assumption that because I’m not a Christian anymore, I no longer believe in God, but I do very much, and still wish to be included in the dialogue. There is a very fine and delicate balance between the relationship of people based on their religious beliefs, allowing room for dialogue, and the opportunity to learn from one another. Like the lesson I learned so long ago, it is difficult, but so right to exist in the liminal experience that is being able to be wrong, and being willing to learn from one another, and, like that speaker who spoke at Lum Sohpetbneng, have the courage to hold your true faith and ideas in an open hand, and truly see what it is they are made of.

Mahatma Gandhi once asked Christian missionaries, “If you feel that only conversion to Christianity is the path to salvation, why don’t you start with me or Mahadev Desai? Why do you stress on conversion of the simple, illiterate, poor and forest-dwellers? These people can’t differentiate between Jesus and Mohammad and are not likely to understand your preachings. They are mute and simple, like cows. These simple, poor, Dalit and forest-dwellers, whom you make Christians, do so not for Jesus but for rice and their stomach.”

This quote on religious conversion by the Father of the Nation got the hackles up of the Christian community. If we would have asked a similar question to Christian missionaries who came to the Khasi Hills early in the 19th century, we could have avoided this mass religious conversion altogether. But it’s never too late to return back home. I have; so should you.

This story of Ghar wapsi by Shimtihun Lyngwa, originally titled, ‘My Reconversion Story’ was first published at The Shillong Times (clickable link).

Featured image (at the top; representation purpose only and does not represent Ghar wapsi) representing a Khasi woman devotee cleansing the stone altar at the summit of Lum Sohpetbneng, a pilgrimage of the Khasis provided by Pankaj Deka.