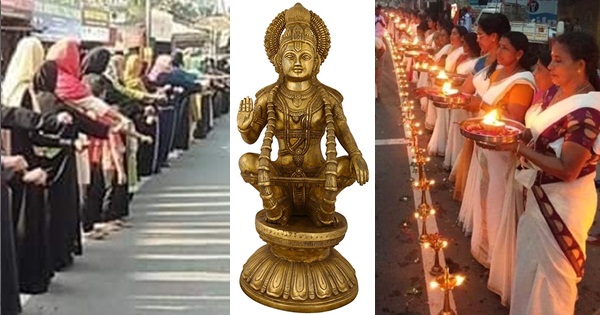 The article on the front page of the newspaper caught my eye for its title. It said, “A wall for gender justice.” Inside it showed a picture of women, their individual hands outstretched in a fist, all of them standing in a queue like cadets in a posture reminding one of oath taking ceremony. But no, they are standing for religious freedom, gender equality and tolerance in present day Kerala and taking an oath that they will not let bigotry take roots. Are the Indian women then planning to pray with their fists outstretched or plan to do so in near future, I wonder? Will they go and do a salute in front of the ‘Ayyappa’ deity from now on saying ‘hail comrade’? Some intellectuals should file a PIL and some Milords should definitely ponder over it to pass a midnight judgment.

The article in the newspaper talked of a wall of gender justice built by women of Kerala that extended for miles and consisted of a million women. Did anybody count it or was the figure given by the State since everything was State sponsored? The article went on to say that the participants made a 620 km wall and they took a pledge to protect the renaissance values, support equality of sexes and resist Kerala from getting into a mental asylum. Surely it seems the pledge was made by a psychiatrist, a gender activist and a medieval historian sitting together and passed by a communist.

On the social media along with the above picture, there is another picture of a wall of women holding candles and diyas. The women are all devotees standing in silence wearing white sarees, flowers in their hair, holding a religious thaal with a lit diya. They symbolizing serenity and grace as if standing itself in front of a deity, a rare combination in God’s own country of today.

I believe it may be called a story of two walls, as different from each other as night and day or better tolerance and intolerance since that is better understood today in India. The one on social media is of women standing with a lit lamp in a religious posture as if about to begin praying. The one in today’s paper on the other hand is of women standing with outstretched hands, their fingers drawn in a fist. They were the ones called by the State. The former look as if not asked to stand by anyone but they came on their own. It reminds me of men and women who came to listen to Martin Luther King half a century ago with the State trying to stop them.

Can we call the two walls say, the first one as a spiritual wall made by the people of Kerala and the second one as a communist wall made by the State? The former I will call a white wall as the women in the wall all wore white sarees and the other a black one as I saw many women covered in black. Can we say that the two walls represent two very different values and stand for two different symbols making us stand at crossroads?

For the wall created by the State, I heard the government ordered the schools and colleges to be shut and asked the women to join and to face consequences if they don’t. Whose idea was it to ask them to make a fist, I wonder? Maybe some comrade who forgot that the protest was for entry into a temple and to show that Hinduism is the regressive religion in God’s own country.

The women who created the other wall, not called by the State, had only had their courage and conviction in ‘Ayyappa’. They organized themselves knowing the police is ready with their lathis, the government with draconian laws and judges who don’t listen. Still they came and made a line. They did so for long distances and threats looming everywhere. National newspapers, media, didn’t cover them but the looks of the women said it all. They only cared for ‘Ayyappa’. They didn’t need to make a pledge. Their eyes said it.

As I write this, many policemen are busy booking them and their men in criminal cases. It is going on unabated in God’s own country, in the name of a certain God not the God that the Hindus of Kerala pray to and whose rights they are fighting for.

Many years ago I studied in a school next to the international airport in Delhi, then called Palam. On the day whenever a head of State came from abroad, we were given a break from regular routine and asked to stand on either side of the road with flags in hand and told to wave it when his motorcade would pass by. It was a fun for us. We competed with each other to shout out aloud and even cheer at every passerby who went driving in a cycle or scooter before him. But few minutes before the head of State was to arrive, our teachers would come and tell us sternly to keep our hands ready and outstretched with the flags and those students who wouldn’t do it were warned that they won’t get their samosas and rasgullas after it was over. Everyone would fall in line and behave in a regimented way till the motorcade passed.

One day it changed and our lives also changed forever. No one told us to form a line on that day and we did it on our own. One of the students of the school was killed by a reckless driver while crossing the road. We all stood in silence and came out with a candle in hand and stood on either side of the road to protest against the reckless driver who had killed our friend. We didn’t realize when we had formed a line on our own without help and stood with no one telling us if we didn’t there won’t be any eatables today. In silence we went out and came back the same way to our classes. On that day I understood, more than ever, the difference between behaviors that come from the heart and those that don’t.

The irony between the two separated by many years cannot have a more tragic and poignant meaning than the reality of the two walls today. The faces of the women in white holding the diya reflected serenity, peace and grace while the faces of the latter reflected tension, aggression and hatred.

Do the two walls have anything in common? On closer inspection they reveal a relationship that maybe both poignant and troubling. The wall of the women in white represents those who are victims of State persecution for their religious beliefs and practices and their attempt to pray with dignity without interference. The other wall represents the forces of darkness of the human mind that comes from contempt and hatred. I pray the people of India see it now, rather than later.

The words in the pledge that the participants recited are a reminder of how Hindus are perhaps seen today by many of those of other faith. If the others think that the Hinduism need a renaissance and the Hindus are turning Kerala into a mental asylum through their practices, it tells me that those who drafted the pledge take Hinduism to be a regressive religion that needs to be annihilated and finished. With the government support, cases being lodged against them, it tells me that the beginning of a genocide may not be very far away.

In every period of history, walls have been built and destroyed by societies to either defend or protect some cherished values. Some have been built to create hatred. Walls have always stood for something larger than us that have taken a society to heights greater than itself or lower than where they stood. Some walls have even protected and nurtured while others became hated symbols like the Berlin wall.

I believe the two walls stand for the ‘two Indias’ that exist of today, one symbolizing ‘dharma’ and the other representing ‘hatred’. We need to make a choice which one is anti-thetical to our national values and then go ahead. Only then will our civilization survive.