We Start with Ayodhya, but We Will Not and Cannot End There 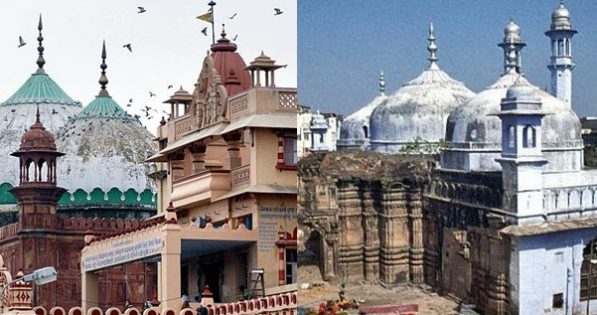 Many years ago, as a young girl, I had gone on a bus tour to Mathura. Imagine my excitement as a Sri Krishna bhakt, seeing His birthplace for the first time. I ended up never being able to go back. It made me sick. I literally felt violated. A tiny dark chamber for Sri Krishna and the oppressive feeling of being closed in on all sides by the towering, gigantic mosque encroaching on the bhoomi. The cackling glee of conquest, loot and plunder could still be felt.

It is the same feeling I had in Kashi. At first, I was puzzled — why is Nandi not facing Shiva? Why is he facing the mosque? And then I realized that’s where the original Shiva linga still is (once a day, one solitary purohit is ‘allowed’ to go in to silently perform puja to the original Shiva linga). Nothing broke my heart more than seeing poor Nandi not even able to have darshan of Shiva in this, the holiest abode of Shiva.

It is the same devastation I felt in Tibet, seeing the unimaginable scope of destruction by the ‘Cultural Revolution’ which decimated the ancient land of Buddhist dharma.

What has always been strange and baffling to me is that we were never allowed to give voice to this pain. We were never deemed entitled to even feel this pain. Any mild expression of this regret, this articulation of a wounded civilization was immediately met with a resounding ‘How dare you!’ said in the most Greta-esque tone of indignation possible.

How dare we not pretend that history began in 1947, that we must always wear the badge of the oppressor but never the oppressed, how dare we wish for the most sacred of our sites — not all, not most, not many, just a very, very, vanishingly very few — be restored to us, especially when they had little to no religious significance for others.

The contests in Jerusalem are about sites that are of utmost importance to multiple religions and such controversies are discussed respectfully and with sympathy. Yet, to speak of Ayodhya — one only is met with pictures of angry mobs bearing torches, the barbaric infidel, with no even symbolic attempt of understanding or acknowledging the pain.

It hurts us, because we believe in a world that cares about justice and fairness. But that is not the world in which we live. We live in a world conditioned by populist and carefully cultivated narratives, fed to us through education, arts and the writing of history, all of which are shaped by those who are deemed worthy to have their voices heard.

For decades, Jews could not get the Holocaust to be recognized. Every Western power was aware of exactly what had happened, but no one wanted to admit it. Where was fairness and justice then? It was only through painstaking, meticulous work and insistence that it was finally recognized. See the work that went into Shoah, the unprecedented and unmatched documentary that meticulously takes apart and reveals the machinations behind the Holocaust, the people involved, the destruction, the inhumanity behind it. That is the kind of effort that is required to change the narrative.

So, I no longer feel the baffled indignation that I felt as a young girl, because I understand now how the world works, not how it should work. Nor am I defeatist. What prevails is nishta, tapobala and shraddha. And most of all satya. Everything else is a temporary aberration. How temporary depends on us, our purushartha. Let us carry on with our work, unruffled by criticism or praise, welcoming of allies but unafraid of enemies, expecting nothing of the world but everything of ourselves, depending on nobody but willing to extent a helping hand to all in the spirit of lokasangraha and sarvatma bhava— let us carry on with the noble qualities instilled in us by Sri Rama, Sri Krishna, Shiva and all our devatas and acharyas.

It is befitting that we start with Ayodhya. But we will not and cannot end there.

Aditi Banerjee is a novelist, writer and speaker about Hinduism and the Hindu-American experience and a practicing attorney in the USA.