Guru-Shani Conjunctions, Yugas and Precession of Equinox: An Analysis 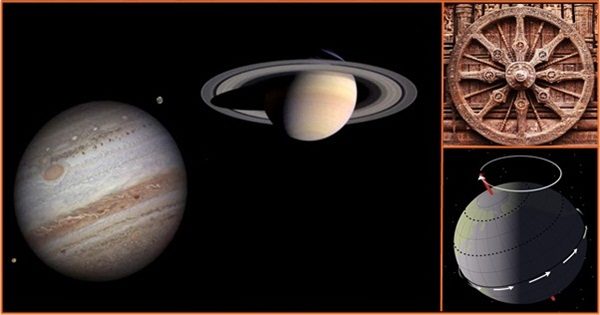 Guru means the heavy one or alternatively the mentor,  the teacher etc. Shani means the slow mover. Interestingly Jupiter is discovered by today’s astronomers to be the heaviest planet in the solar system and Saturn is the slowest moving planet visible to average human eye without using any devices.

This year, on the day of Winter Solstice (on December 21st),  the planets Jupiter and Saturn are coming together in the neighborhood of Uttarashada and Shravana Nakshatras,  signifying a new Yuga or Yuga changes!

As per one of the  interpretations, the two planets Jupiter (Guru or Brhaspati) and Saturn (Shani) came together in Vishakha nakshatra in the past – close to Kurukshatra War.

Jupiter and Saturn coming together is a very common occurring in every 19.6 years,  due to the 11.86 year orbital period of Jupiter and 29.5 year orbiral period of Saturn. This give rise to a 20 year long Chatur Yuga,  with each Yuga 5 years long and of equal size. Such a Chatur Yuga cycle of 5 x 4 = 20 years is mentioned in the Mahabharata. 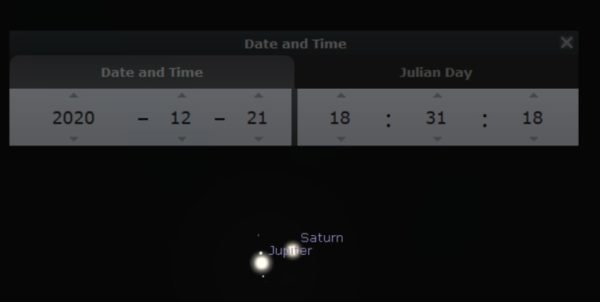 During the Kuru-Matsya war of cattle theft,  the Kuru leaders were seen as talking to each other about the Adhimasa calculation related to this 5 year yuga.  Due to the different ways that the Adhimasa calculation was done,  Duryodhana thought that the Pandavas were discovered in their 13th year Ajnatavasa (incognito) and had to redo another 12 year of vanavasa (forest life) as per their pledge. But the other Kuru leaders corrected him to the effect of declaring that the Pandavas indeed completed the full 13 years (12 year vanavasa and 1 year Ajnatavasa) at the time of their discovery in the battlefield of Matsya territory facing Duryodhana to fight.

The coming together of Jupiter and Saturn at specific Nakshatras or at solstices and equinoxes are rarer and more significant than their coming together at any point in the sky.

The 60 year cycle of Jupiter-Saturn (the synchrony of the 12 year Jupiter orbital period with the 30 year Saturn orbital period at 60 years of intervals) also is very famous, as it brings Guru-Shani to relative restart positions in their respective orbits.

It is possible that this 60 year cycle (with the 20 year Saturn-Jupiter conjunction cycle based Chatur Yuga embedded in it) is expanded to 120 years,  then to 1200 years and finally to 12000 years cycles by our ancient  astronomer-mathematicians attempting to correct residual errors in the cycles. Thus we do have another Chatur Yuga defined in Mahabharata with a total duration of 12000 years.  This is mentioned in the Markandeya Yudhisthira Samvada.

Finally this 12000 is multiplied by 360 for getting even better accuracy,  giving rise to the most popular 43, 20, 000 long Chatur Yuga duration! This too is mentioned in the Mahabharata.

The basic unit of 12000 year long Yuga,  which I have described in my website AncientVoice as the Markandeya Yuga, (since 2010),  can also be the 12 year Jupiter period,  multiplied progressively to become 120 years, 1200 years and finally to 12000 years, to correct the residues.

The 12000 year long Markandeya Chaturyuga is the precursor to the 24000 year long period, viz the first known and the most ancient  aproximated value of the precsssion of the equinox (modern value is 25772 years).

The oldest attestation of the precession cycle is but in Alexandria (Greece) at 127 BCE.

Markandeya is certainly an old figure, even if not contemporary to the Pandavas (or to Krishna or Dhrtarastra or Parikshit as they are mentioned in other texts too so their historicity is not doubted).

From 12000 to 24000 is not a big leap.  When the Chatur Yuga was only 20 years,  a sort of Chatur Yuga Yugma with 20 years each was thought of like the equalent of aho-ratras with a total duration of 40 years.  Hence  conceiving  a Chatur Yuga Yugma of 12000 plus 12000 years leading to the 24000 period is not a big leap.  Its match with the calculated,  (in contrast to actual observation of) the full revolution or the full precession of equinoxes and solstices based on 1000s of years of sedentary observation from the north west Bharata like Kurkukshetra, (famous as a place of astronomy observation) is not far fetched.

So the Bharatiyas knew precession very well since many ancient times as per my view.

Besides the ancient towns like Bhirrana (7000 BCE) near Kurukshetra substantiates a millenia long sendentary civilization,  a pre condition to access such deep astronomy observational insights for many 1000s of years,  to physically observe and thus discover, such slow phenomenon like precession.

Another traditionally known value of the precession of equinox, much more accurate than 24000 years,  too is known in the Bharatiya texts. It is however not mentioned explicitly but encoded as a cryptic number in Rgveda and its reflection is found in the Mahabharata too.

It is the number 72 cryptically mentioned in the in the Rgveda with a hint to multiply it with the number 360. When we do this multiplication we get 25920 years which is a better value of precession than the value of 24000 years. This is only 148 years different from the current value. Here one also need to remember that the period of the precsssion of equinox varies as centuries and millennia pass by.

In Rgveda 1st Mandala, a Kalachakra with 12 spokes is mentioned on which 720 sons (in 360 pairs) is attached. If we consider this as 720 generations separated by 36 years each and interpret the pair as one father-son duo, doing astronomical observation,  the precession can be discovered as doing a full circle,  in 720 x 36 = 25920 years which is also the period of the precession of equinox. Rgveda in many verses makes it amply clear that Kalachakra is nothing but sky conceived as a giant clock,  with the sun having three types of motions as its  single dial. It is also clear that Rgveda divides the sky or the kalachakra into 12 divisions. This is pre cursor to the zodiac with its 12 divisions. A hint is given that precession can be undsestood as the 3rd type of motion of the sun. Sun’s first motion is the durinal motion,  from east to west giving rise to the day and night in a circular motion. Its second motion is the seasonal motion from north to south (and south to north) giving rise to Uttarayana and Dakshinayana,  in a pendular motion also resulting into the six seasons,  and one year).

This 3rd motion is observed as the slow shift in the occurrence of the equinoxes and solstices. In around 72 years,  they shift by one degree in the sky, corresponding to around  one day in the yearly calendar. This is observable to a father-son astronomer pair. When many such father-son pairs observe it in 720 generations,  the entire circuit of the sun’s third type of motion,  viz the precession of equinox can be seen. This is the hidden meaning of the Rgvedic verse. In 36 years the equinoxes and solstices move by half a degree in the sky. In 72 years it moves 1 degree in the sky or in the kalachakra clock.

Both the Sun and Moon thus have an approximate angular diameter of half a degree in the sky. This help to conceive half degree sized divisions in the sky viz the Kalachakra clock,  giving  a total of 720 divisions like mentioned in the Rgveda!

By copying this 720 divisions into an astronomy device affixed on ground,  the ancient sky watchers since the Bhirrana time (7000 BCE) are fully equipped to define Yugas as big as 12000 years and to discover the precision of equinoxes which is approximately twice big in duration.

In conclusion, we have ample evidence from our ancient texts about the usage of Saturn-Jupiter conjunctions to define Yugas.  The Shani-Jupiter  cycles in multiples were used to define Yugas of 12 years,  20 years (which also matches with the four ‘Yugas’ of 5 year duration,  the smallest Chatur Yuga system,  developed as part of intercalation of lunar and solar calanders),  40 years (the aho-ratra pair of two consecutive Chaturyugas),  60 years (12 year Jupiter cycle synchronized with the 30 year Saturn cycle),  120 years,  1200 years and 12000 years. An aho-ratra Chatur Yuga Yugmna of 24000 years is thus conceivable which was the closest approximation of the precession of equinoxes period.

A better approximation of precession period as 25920 is found encoded in the Rgveda and the Mahabharata. We have also seen how archaeology supports this assertions by providing us material evidence of a sedentary civilization capable of astronomical observations to discover such slow phenomenon like the precession of the equinoxes with thousands of years of observations (viz the Harappan civilization or the Sindhu Sarasvati Civilization) with its towns like Bhirrana dated convincingly to around 7000 BCE. We also shown how the apparent or angular diameters of the Sun and the Moon help in dividing the sky to 720 parts as described in the Rgveda,  leading to the discovery of the precession of equinoxes.

Is Kohinoor Diamond the Syamantaka of Mahabharat Era? An Analysis