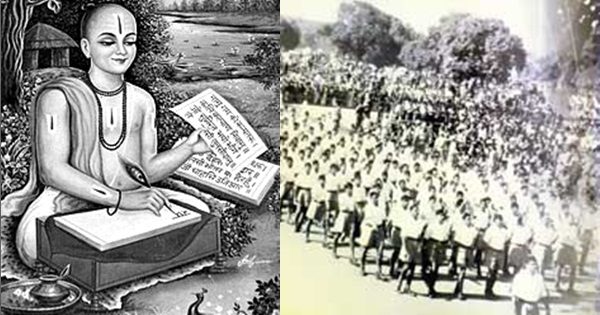 In 1925, an enquiry committee consisting of Motilal Nehru, Moulana Azad and Dr. Mohamed came to Nagpur to settle the ‘communal issue’. It put forward a mutually agreed formula, as to when and where the music could be played before the mosques and when and where it was to be stopped. But so far as the Muslims were concerned the agreement remained only on paper. They continued to become more and more aggressive.

Hindu ladies proceeding for religious festivities like Haritalika became subject to Muslim mischief. However, Doctorji promptly deputed batches of Swayamsevaks to such places and the women devotees could thereafter breathe a sigh of relief. (Deshpande and Ramaswamy [1981] 2015, 88) (Source: ThePrint.In)

The wider Hindu society took note of Swayamsewaks during pre-partition riots. Swayamsewaks of RSS stayed back in what is today’s Pakistan and Bangladesh helping every Hindu who wanted to move out. They risked their life and some lost their life too saving fellow Hindus.

In the book ‘Converted Kashmir: A Litany of Mistakes’ author N. Sehgal documents: “There were no airfields for facilitating the landing of Indian Air Force men. Wherever they existed, they were in a pitiable condition. Not to speak of the planes, even people could not walk on those runways. There was need for their quick repair and renovation. But it was not possible to arrange a big force of labourers. Even if thousands of labourers could be arranged it was not possible to pay them their wages in those conditions. There was need for such skilled manpower who would work voluntarily….The matter was discussed with Sangh leaders. Everyone was ready. On receiving the directions, thousands of RSS workers jumped into the field. The repair and the renovation of the airstrips in Srinagar, at Poonch and in Jammu were carried out round the clock for making these three airstrips worthy for landing within the stipulated time.”

During natural disasters, swayamsevaks have reached the disaster sites generally even before the official machinery could activate itself, be it Andhra Pradesh cyclones, Morbi floods, Latur and Gujarat Earthquakes or Tsunami. It is a fact that the maximum damage in a disaster happens within first 24 hours. It has generally been recognized by all that these volunteers have always reached at disaster sites within hours to deliver succor to the disaster victims.

The Morbi disaster occurred during Ramzan. Sangh and its relief agencies provided nearly 4,000 Muslims, lodged in relief camps, with necessary facilities to go through their religious rites without a break even for a single day, with food being cooked for them in the early hours of the day and served to them before sunrise. It is another example of thoughtful, compassionate and selfless social work. ‘Tughlak’ of Chennai wrote, “People in Morbi look upon Swayamsevaks as Gods!”

How old is the concept of swaymsewaks in Bharat? This thought, naturally landed me to city which is older than the history i.e. Varanasi and lo and behold I had my answer. Manas ke Hans by Amrutlal Nagar also describes what I discovered and the answer I got in Varanasi.

There was spread of plague in Varanasi; people were dying every day in large numbers and not many were left to take the bodies for cremation.
Tulsidas ji decided do something about it. Tulsidas ji had set up akharas (place of exercise/wrestling) by this time in all parts of the city. Some of these akharas were varna specific and some were open to all varnas. One late evening he went to the head of Ahir (people dealing in milk) akhara. He asked for their help in cleaning the city, he immediately agreed.

The head of Ahir Akhara suggested that they should get more people from different akharas. Tulsidas ji agreed to the idea. Head of Ahir Akhara took him to the house of a boy who was the head of the Brahmin Akhara. The fifteen-year-old boy had lost his parents and he was staying with his old grandfather. Tulsidas ji explained the reason of his coming to both the grandfather and the boy. Both immediately agreed to Tulsidas ji’s idea. And by midnight there was a force of young boys who had taken up the responsibility to dispose of the corpse and clean the city.

The work started from next day morning. After few days, a friend asked Tulsidas ji, is he not worried about the health of the boys. Tulsidas ji said, ‘no he is not worried’. He said: “He has picked up boys from Akhara. These boys do exercise every day; hence their body has pure blood and strong immunity. The boys also eat neem leaves regularly. On top of it they are bhakts of Hanuman ji.”

(For the uninitiated, Hanuman Chalisha has been written by Tulsidas ji and he founded the Sankat Mochan Hanuman Temple dedicated to Hanuman ji in Varanasi, at the place where he had the sight of Hanuman ji. He used to call the boys at akharas as Vanar Sena. The initial funding for the akhara has come from Tulsidas ji. He was a poor man, but once he had helped his friend and his friend has made lot of money. He shared some of it with Tulsidas ji, who said he can’t take money for helping a friend. His friend said he can’t keep all the money because it was made with the help of Tulsidas Ji. So, they had collectively decided to deposit it with a businessman thinking they will use it for some good cause. When Mughal atrocities became unbearable, Tulsidas ji went about setting up akharas with that money. The akharas did serve the purpose of their formation.

Swayamsewaks give up everything (even their life) while doing social work without expectation of anything in return, not even an acknowledgment, just for Swanta Sukhaya. And this is the reason for their success. So, if you want Swanta Sukaya, during Wuhan Virus times, just look for the e-sakha in your handset.

Sandeep Singh is an author of 10 books, columnist and speaker. He conducts a "Walk Through Indian Business History". Tweets at @sandeep_author