Congress-AIUDF Alliance in Assam and Changing Demographic Equations: An Analysis 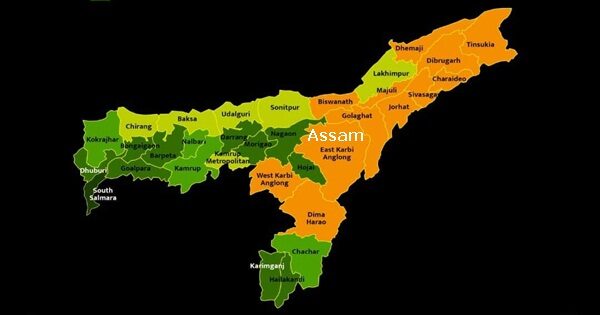 The results of the 126-member Assam Legislative Assembly that were declared on May 2, saw the BJP+ (BJP+AGP+UPPL) making an impressive comeback with a total number of 75 seats. On the contrary, the Congress-led Grand Alliance has been able to capture 50 seats, majority of which are concentrated in the Muslim-dominated districts of Lower Assam, Central Assam, and the Barak Valley. But, the most important and intriguing question that arises here is – How far was the BJP’s slogan of Sabka Saath, Sabka Vikas, Sabka Vishwaas successful in terms of electoral outcomes in different constituencies across Assam? In other words, did this slogan really prove to be a game-changer in translating the massive developmental works executed by the party into numbers in the Legislative Assembly, especially in those districts where the Muslims are in a majority?

Well, out of the 50 seats that the Congress-led Grand Alliance has been able to secure in the Assembly, 16 of them have gone to the AIUDF (all Muslim MLAs). It needs to be mentioned here that compared to the Assembly Elections of 2016, this time, the AIUDF has increased its tally by 2 more seats. Out of the total 29 seats won by the Congress Party, 16 of them have gone to Muslim candidates. Hence, the total number of all-Muslim opposition MLAs (Congress+AIUDF) in the forthcoming Assam Legislative Assembly of 126 seats thereby comes to 16+16=32. Out of the rest 18 MLAs who have won, a minimum of 10 constituencies do have 35-45% Muslim influence, where the AIUDF and the Congress had fielded united candidates. Undoubtedly, they will try to maximise and consolidate these gains further, with an eye on the Parliamentary elections of 2024 and the next Assembly Elections scheduled for 2026.

The bitter reality of the Assamese Hindus (which includes the janajati communities as well) who are almost on the verge of obliteration in many places of the state, can no longer be downplayed. While legalising the Hindu refugees from Pakistan, Bangladesh, and Afghanistan through the CAA, the deportation of those already identified in the category of D-voters (D meaning Dubious or Doubtful) in the NRC is equally necessary at the same time. There is no time to for complacency anymore. The danger of Islamic expansionism is assuming monstrous dimensions in Assam. These might sound like politically incorrect concerns to an agenda-peddling coterie of the influential lot in our society. But, the fear of cultural decimation and subsequently becoming a minority in one’s own land are real-time concerns that cannot be whitewashed under the garb of Assam being the land of Sankar-Ajan that epitomises secularism at its best.

So, the real question that arises here is – Has the Congress-AIUDF alliance in Assam really failed, if analysed objectively? What are its implications going to be in the political scenario of Assam in the coming times? Will the BJP complete the unfinished NRC, or will it go ahead with the undertaking of an error-free delimitation exercise in Lower Assam that borders Bangladesh and as well as the eight sensitive districts of North Bengal? Well, these are still open-ended questions that only time can answer. As the election results have proved again, the Bengali-speaking Muslims in Assam have a sizeable presence in 35-40 Assembly seats. Lok Sabha member and AIUDF supremo Maulana Badruddin Ajmal enjoys a considerable sway over the community, trying to push forward his cultural and political agenda on the back of their abnormally increasing numbers over the decades.

The consolidation of the anti-BJP vote behind the opposition ‘Grand Alliance’ (Congress+AIUDF+BPF+Left) eventually worked in favour of the AIUDF during the second and the third phases of the Assembly polls in Lower and Central Assam and the Barak Valley, where a majority of the Muslims are concentrated. As the final outcome of the elections proved it, Muslim voters played a decisive role in many constituencies, especially in the third phase of the polls held on April 6. Most of the constituencies in this phase witnessed a straight fight between the ruling BJP-led NDA and the Opposition Congress-led Grand Alliance. Whereas the BJP has made some impressive gains in around half of the Bengali Hindu-majority constituencies of the Barak Valley, the Congress-AIUDF combine reaped a rich harvest in the Muslim-dominated areas.

A post-analysis of the results of the elections in these phases has proven that a seamless transfer of votes took place among the constituent parties of the Congress-led alliance. In those seats where the Congress Party was in the fray as a part of the seat-sharing arrangement, the votes of the other grand alliance constituents went to it; and in those where any of its partners had contested, the votes of the Congress Party got transferred to that particular ally. In the 2019 Lok Sabha polls too, such a phenomenon of vote transfer from the supporters of the AIUDF to the Congress could be observed in Mangaldoi, Silchar, Nagaon, and Kaliabor seats even though there was no formal alliance then between the two parties. The issue of vote transfer is especially relevant for understanding the pattern of voting in the seats of Phase II and Phase III in the Muslim-dominated areas of Assam, as compared to the areas where polling took place in the first phase on March 27.

In the Phase I of the elections that took place on March 27, the AIUDF had contested from only one seat, i.e. Dhing in Nagaon district, which has been among one of its traditional bastions. This time too, the party’s Aminul Islam has retained it by a huge margin of votes against his contenders. The prevalent demographic composition in Central Assam, Lower Assam, and the Barak Valley helped in providing an edge to the party of perfume-baron Badruddin Ajmal in those seats where it was in the fray. The population pattern in most of these places makes things very difficult for the BJP to register a win. Even in those seats where the AIUDF was in a ‘friendly contest’ with the Congress, e.g. Jaleswar, Dalgaon, Katlicherra, Baghbar, and Chenga, the Muslim factor stood out predominantly. Hence, even though there might have been a split in the Muslim votes, this did not help the BJP to sail through.

Another important factor which is often missed to be taken note of is that over the years, the Muslims have perfectly learnt the strategy of ‘tactical voting’ with the primary objective of defeating the BJP. The defeat of a popular leader like Gautam Roy from the Barak Valley is a classic case of this phenomenon which can rightly be termed as tactical ‘religious voting’ by the Muslims. This religious voting pattern in many other constituencies such as, Goalpara East and Golakganj, is definitely going to shape the future course of politics in Lower Assam. Several districts in Lower Assam which are contiguous to the international boundary with Bangladesh have seen some of the worst-impacts of this demographic transition over several decades. The entire area comprising of present-day Lower Assam and some portions of North Bengal too, was once the ruling bastion of Dharmic warriors like Maharaja Naranarayan, Bir Chilarai, and Prithu who fought against invaders such as Bakhtiyar Khilji and Ghiyasuddin Tughlaq.

The Muslims of Assam have been equal beneficiaries of the Government’s social welfare schemes, as any other community. But, the defiance of logic in favour of blind emotion by the Muslims at the time of voting has stood out most prominently in constituencies such as Batadraba and Mangaldoi. Both of them have a significant concentration of Muslim population and have been won by the Congress Party. Batadraba is the birthplace of Mahapurusha Srimanta Sankardeva where the BJP had invested much time and energy since 2016 to build it as a core constituency of the state with a potential for tourism. PM Narendra Modi is soon going to inaugurate the proposed Nagaon-Dhing connecting four-lane road, which will immensely benefit all sections of the society by reducing both time and cost. The regions of Batadraba and Dhing in Nagaon district have seen large-scale infiltration of Bengali-speaking Muslims, and large areas of the Batadraba Than and Namghar (religious prayer hall of the Assamese Hindus) have seen massive land encroachments in the past several years.

Interestingly, Sibamoni Bora of the Congress was earlier posted as the Block Development Officer at Batadraba. It was during an election rally at Batadraba that she went on to openly say that when she was entrusted with election duties as the BDO of the area, she let many people enter their names without any verification. She made this shocking statement to prove how she had been ‘serving’ the people of the area even before she joined active politics, when she was a government officer. In a video shared by an Assamese news channel, Sibamoni Bora hinted that if the Congress-AIUDF combine did not come to power at Batadraba, they might lose their voting rights, and hence they should vote for her instead of Angoorlata Deka, the BJP’s sitting MLA from Batadraba.

Coming to Mangaldoi, former BJP MLA Gurujyoti Das had done some really commendable work for the all-round development of Mangaldoi constituency in the past five years, e.g. launching of work for the Skill University, functioning of the mega agricultural cold storage project near Kharupetia, improvement of surface connectivity, beginning of the process for diversion of the National Highway (NH) from Mangaldoi town, etc. Several senior BJP leaders, including former CM Sarbananda Sonowal, Union Minister Jitendra Singh, Dr. Himanta Biswa Sarma, and MP Dilip Saikia had addressed rallies for Gurujyoti Das. But, he finally lost it to Basanta Das of the Congress, thanks to the fast-changing demographic complexion of Mangaldoi and its nearby areas of Sipajhar and Dalgaon.

In the last Assembly polls in 2016, Gurujyoti Das defeated his nearest candidate of the Congress Party by a margin of 22,045 votes, with the AIUDF candidate finishing in the third position. But, in 2016, the arithmetic was different since there was no alliance between the Congress and the AIUDF. In the 2019 Lok Sabha polls, when there was no AIUDF candidate in the fray, the vote share of the Congress candidate had increased to 1,03,132 against 80,253 polled in favour of the BJP candidate. This time, it has clearly been the Islamic demographic factor which played a key role in finally determining the poll outcomes of constituencies such as Batadraba and Mangaldoi. This is an alarming development for the Assamese Hindus, especially in Batadraba, where political power has finally shifted to the hands of the “peacefuls” this time.

The Elections of 2021 were almost the last futile attempt on the part of the Congress Party to regain and revive its lost glory in a state that it had ruled for 15 years continuously. In its opposition to the CAA, the Congress Party in Assam has constantly tried to revive its national level strategy of positioning itself on its ‘secular’ credentials as opposed to the ‘communal’ BJP, which explains its alliance with the brand of politics espoused by Badruddin Ajmal. Had the Congress Party announced its alliance with the AIUDF after the first phase of the elections that were held on March 27, who knows it could have been a different ball game altogether? Nevertheless, it must not be forgotten that Islam unites all Muslims, across the world. They take the calling as a single united bloc on whom to cast their vote for, unlike the majority Hindus.

Dr Ankita Dutta is a PhD in Political Science from JNU. She is also a Writer, Columnist, and Research Fellow with the Indic Academy Group. She writes on Indic topics, politics, etc.