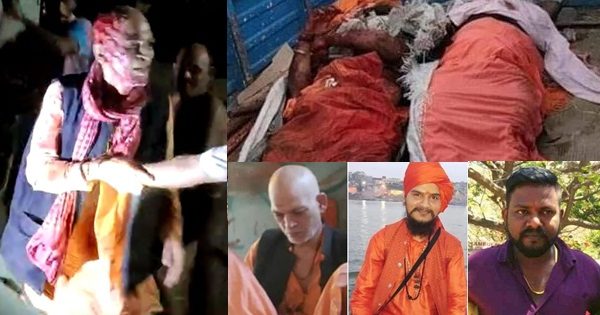 The Palghar incident involving the brutal lynching of Sadhus of Juna Akhara and the indifference displayed by the politicians proves yet again that the secular Indian State is inherently anti-Hindu. Perhaps, there is no single reason for this incident. But it would be fair to assume that the modern Indian mind does not have any reverence for the Hindu Dharmagurus or at the most they reserve it for their own Gurus.

It is suspected that the mob which comprised of CPM workers was instigated by CPM leaders. The Communist contempt for Hindus is already evident. The reports also state that Palghar is a center of proselytization and conversion activities. The proselytizing groups have been instilling an anti-Hindu feeling in these areas which explains the barbarity shown by the mob and also general apathy by the State of not taking any action against conversions.

But do we really need proselytizers or other religions to instill hate for Hinduism when the disdain towards Hinduism has been institutionalized and enslaved Hindu minds see nothing of value in Hinduism? For many decades, the venom is being spewed against Hindu Gurus, priests and the Hindu ways of life through Bollywood movies, media, and academic institutions that now one does not need to belong to other religions to hate or kill Hindus.

The specific context that we have very poisonous rhetoric against Hinduism and Hindu Dharmagurus and thus anti-Hindu motive behind the incident of lynching of Sadhus Chikane Maharaj Kalpavrikshgiri (70) and Sushil Giri Maharaj (35) and their driver Nilesh Telgade cannot be downplayed. However, this incident has another dimension that reveals how public outrage leads to murders. This coupled with the venom that is spewed against Hindu Gurus, one should not be surprised what Hindus have to endure. Recently, there have been many other affronts to the rule of law that have become common in India.

Even the public demand has resulted in encounters by the police without any fair trial. Sadly, when people hear about a misdeed no matter if that is a rumor, the feeling of moral superiority vitiates any need to evaluate the situation and makes them treat the accused guilty until proven innocent instead of the fair trial. There could be no justification including delayed justice as whole life is at stake.

But then the question is would maulvis or padres (even if guilty) be given the same treatment by the police and mob? The answer to this question lies in what anti-Hindu rhetoric and false minority persecution narratives have created over the years. The proclivity of the police and other authorities, in that situation, would have been to take stringent actions against the culprits rather than waiting for videos on social media. The cowards would have suddenly turned brave.

This traumatizing incident of the lynching of Sadhus thus not only reflects the treatment of Hindus by the State but also reveals how the general public in India behaves and transforms into barbarians. It also reveals their source of inspiration being Bollywood masala movies along with religious scriptures or ideologies which are inherently exclusionary. It also shows the contempt the general public/police have for Hindu Sadhus.

In a civilized society, extrajudicial murders by police (except for dealing with terrorists) are a poor reflection of their efficacy and should be considered an indication of police and judiciary incompetence.

But there have been instances when they were eulogized, they have been thus made to feel they are doing something good if they pander to the public, Bollywood narratives just add to the sense of impunity and bravado making them complacent in implementing the rule of law. The police in Palghar, thus, just pushed the helpless old sadhu to the mob to be murdered which they would not have dared with leaders of any other religion.

It is a tragedy that people accept that taking the law into their hands is not just normal but also the ideal. The collapse of society is inevitable unless there is respect for the law of the land.

The general public has become immune to facts, not knowing the long-term consequences of such outbursts. Similar mob behavior reflects in the violent anti-CAA protests although those are largely inspired by the religious ideology (again an anti-Hindu motivation). People fail to understand they are perpetrators now but could be victims the next time.

Nonetheless, the onus is on the Government. It is disappointing to see that no major politician has condemned the incident of the lynching of Sadhus in Palghar yet. Perhaps they are waiting for a narrative to build-up and then take sides. Or by their inaction, they keep signaling Hindus to forgo any expectation of help from them.