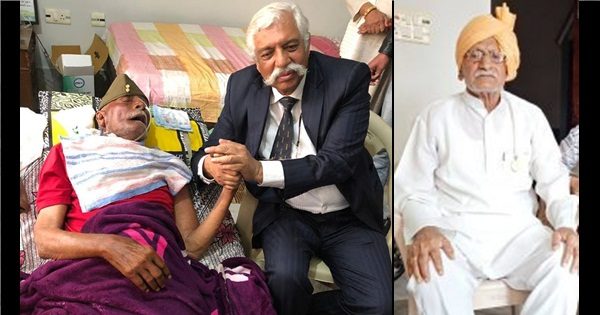 Azad Hind Fauz (INA) veteran Sepoy Parmanand Yadav! He was called Mahashay in the INA unit in Singapore as he motivated his fellow brethren with patriotic songs and with anecdotes from the Mahabharata and Ramayana. He worked both as a covert spy as well as gunner (especially in targeting enemy aircrafts with bomb and gun). He said he did this to not only keep the INA soldiers motivated but also make them feel at home in Singapore, a place far away from the motherland.

Few months ago I along with my team visited Parmanand’s home near Manesar. We interviewed him and got to know many unknown aspects about Netaji Bose and freedom struggle He recited to us two of the patriotic poems with the same zeal he recited during the freedom struggle days. We experienced goose bumps. I visited him again, this time for a lunch. He narrated more of his experiences during his INA days. 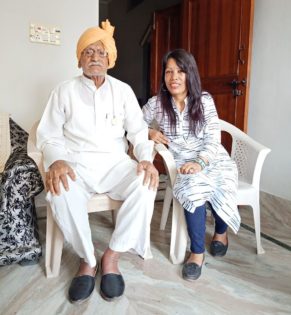 Parmanand Yadav was witness to the destruction of Prince Charles ship that accommodated hundreds of British soldiers during World war II in the Japanese waters. The pilot of a Japanese fighter plane made a suicide attempt by striking into the engine of the ship. And he succeeded. Shri Yadav was part of the war preparations in the Northeast. Walking through the dense jungles of Burma, he along with Netaji Bose and fellow soldiers reached Manipur, Nagaland, and Assam.

During this time he worked as a spy disguised as a medicine seller. His duty was to check the number of British posts in Assam and other regions of the Northeast and pass on the information to Netaji Bose. He was caught by the British and jailed. He dug an underground tunnel and released himself free from the prison. Later he went back through the same tunnel to free fellow Azad Hind Fauz warriors.

INA veteran Parmanand Yadav was part of the 70th Republic Day Parade. It was for the first time in the history of independent India that the Modi Govt facilitated participation of FOUR Azad Hind Fauz veterans in Republic Day Parade on Rajpath in 2019. The INA veterans – Bhagmal, Lalti Ram, Hira Singh and Parmanand – all aged above 95, were driven down Rajpath in an open jeep. PM Modi himself felicitated Lalti Ram in Red Fort. Modi Govt. also paid tributes to Netaji  with celebration of the Azad Hind govt anniversary in the Andamans.

On the 71st Republic Day Parade, no INA veterans were invited. There are only counted few INA veterans today. According to sources the govt has been approached for the same several days prior to the event, but there was no positive reply from them. Why? 26000 INA soldiers attained martyrdom for the freedom we enjoy today. The INA was the first Army of India led by an Indian – Netaji Bose that fought against British for India’s freedom. There are documentary evidence that prove the British left India as a result of the widespread mutinee by Indian soldiers following INA trials. Thousands of INA soldiers died in penury and misery and without any recognition after Independence due to indifference of the then Nehru govt. Can the surviving INA veterans be given due recognition with Padmashree and their participation in RD Parade every year. After 2-10 years, even if we want to, we may not witness them or make them participate, as all of them are aged between 94 to 100 plus years. Parmanand Yadav continuously yearned for Netaji’s and INA’s recognition from the govt. Will the govt listen?

Today the brave INA veteran freedom fighter is critically ill. He was admitted to the ICU following low blood pressure and respiratory problems due to old age. I have been continuously in touch with his grandson Manish Yadav, a wrestler who has numerous national and international titles to his credit, to stay updated about his health. He has been bedridden since the last several days. But even in this condition, he never stops uttering ‘JAI HIND’ – the slogan of Azad Hind Fauz, in a thundering voice. Maj Gen GD Bakshi recently visited him. They greeted each other with a ‘Jai Hind’. 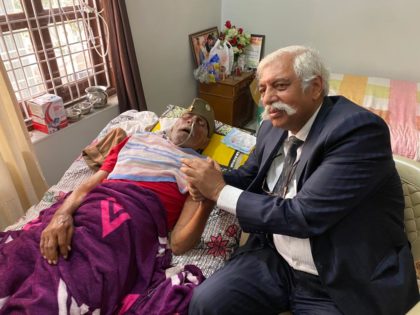 A heartbroken Maj Gen GD Bakshi wrote on his Facebook after this visit – “Sep Parmananda of INA Bhadur group is 100 plus years old. Last year he was one of the four INA veterans honored by inclusion in the Republic Day parade. He was keenly awaiting Instructions to join Republic day parade this Year also but was heart broken to learn that the Ministry of Defense had Forgotten all about him and the INA and had gone back to celebrating Mahatma Gandhi and Ahinsa instead of Netaji and the INA. He became very unwell and i was told he may not live. The doctors have said there is no Hope. I rushed to his village to pay my respects to this grand old warrior. I felt terrible. The least the babus of the ministry could do is to apologise to this old man. Next year is the 125th birth anniversary of Netaji. I hope the babus wont forget the soldiers of his FORGOTTEN ARMY even then. Iam not too sure if it is the prime job of the ministry of defense to celebrate AHIMNSA.”

Here’s a video of how the brave INA veteran reacted:

One of the greatest leaders and the thousands of freedom fighters who played a key role in the Indian freedom struggle was Netaji Bose and his Azad Hind Fauz (INA) soldiers. INA was initially organized by the joint efforts of Gen Mohan Singh and Rash Behari Bose. Netaji Bose sought military support, especially from the Axis powers (more from Japan) to kick out the barbaric and tyrannical British colonials from India. Lakhs of our freedom fighters have already sacrificed their lives and been jailed by then. When Netaji Bose saw MK Gandhi’s non-violence and appeasement would not help India gain freedom, he undertook death-defying journeys, moving from one country to another, until he could find a safe haven where he could gather forces to wage war against British to free India.

It was Netaji Bose who could motivate Indians settled abroad. Many prisoners of war and civilians joined him and thousands donated their entire wealth for the freedom we enjoy today. Only Netaji Bose could do that; such was his aura and his commitment to Bharat Mata! The Azad Hind Govt. he formed on 21 October 1943 in Singapore, was recognized by 11 countries. It was the INA that freed parts of the Northeast and the Andaman and Nicobar Islands after defeating British in war. Documentary evidences prove it was the INA and the INA trials which led to nationwide revolt, especially the RIN (Royal Indian Navy) Mutiny, which ultimately forced the British to leave India.

Despite Maj Gen Gagandeep Bakshi and more Netaji and INA fans and organizations requesting the govt for continuous inclusion of surviving INA veterans in RD parade, the request has not been taken. Why do we need to tell the govt again and again? This year’s RD parade was over without the INA veterans. Hoping, by the next RD Parade and upcoming RD parades, the govt. listens.