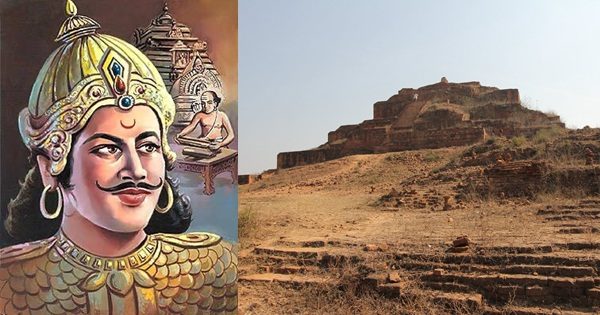 I often heard my mother saying that our ancestors had migrated to Karnataka in southern India from Ahichhatra. When I asked where Ahichhatra was, she said it was in Punjab or Kashmir. It always excited me that my people had made such a long journey in the past to start in their life in a new place.

Much later in life, I discovered that Ahichhatra was neither in Punjab nor Kashmir but in the state of Uttar Pradesh, close to the city of Bareilly. It is strange that despite living for many years in New Delhi, which is some 270 kilometres from Ahichhatra, it never occurred to me to visit it.

As they say, there is a time and place for everything. Just as I was digging deeper into the educational heritage of ancient India and finding a treasure of knowledge, a friend invited me to her wedding in Lucknow in Uttar Pradesh.

But let me start from the beginning. In 345 CE, Mayurasharma, also called Mayuravarma, established the Kadamba dynasty in Banavasi, in today’s northern Karnataka. The Kadambas are credited with helping in the emergence of Kannada as a major language because they made it the language of administration. From various inscriptions, we know that Mayurasharma defeated the Traikutas, Abhiras, Sendrakas, Pallavas, Pariyathrakas, Shakasthana, the Maukharis and Punnatas. The Kadambas ruled for 200 years before making way for the Chalukyas. 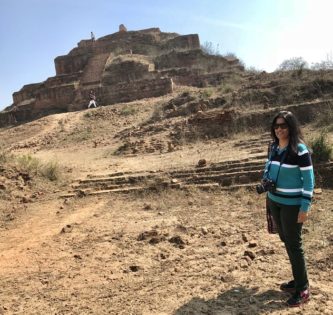 Sahana Singh, the author of this article

One of the important things that Mayuravarma is known for is the inviting of learned Vaidika Brahmins from Ahichhatra. He wanted Brahmins who were well-versed in Sanskrit grammar, Vedic Shastras, rituals and other kinds of knowledge useful in administering a kingdom.

Thus, in the fourth century, several groups of families made their way from Ahichhatra in the north to Banavasi in the south (a distance of over 2,000 km) in order to honour the invitation of a king. To one such group consisting of 60 families belonged my ancestors, who were called the Shashtikas or the people of Arvattu Okkalu. They largely married within themselves initially, but later, they must have formed marital ties with others in their adopted land. Remember, this was a time well before the famous three Gurus Adi Shankaracharya, Ramanujacharya and Madhvacharya (unless it can be proven that Adi Shankacharya was before this time).

My great-grandfather Garani Vaiyyakarani Krishnacharya was one of the most learned Sanskrit and Kannada pandits of his time (1800s). He came from a long line of Sanskrit grammarians and was a prolific author who mentored many other brilliant people who went on to become great achievers. He also dabbled in nutritional sciences, and discovered steam cooking (havyapaaka paddati) which helped him to banish his illnesses and transform himself into a healthy person. He presented a demo of his steam cooking method to the Maharaja of Mysuru in 1911. He has been described by his students as a handsome person who believed in brevity and preciseness of communication (clearly my opposite!). The famous Kannada author DV Gundappa said about my great grandfather: “Sanskrit grammar was the ancestral property inherited by Krishnacharya.”

Shri Krishnacharya’s son, my grandfather Timmanacharya too was a Sanskrit professor with an MA in Sanskrit but he additionally had an MA in English literature. He was the first principal of Sanskrit College in Mysuru and later a lecturer at National College, Bengaluru. His lectures were very popular not just because he taught so well, and made insightful comparisons between Sanskrit and English literature, but also because of his outstanding personality. He filled students with enormous motivation to pursue learning and was truly a teacher who reigned in students’ hearts.

Knowing the magnitude of the work done in Sanskrit by my immediate forefathers, it made me curious to learn more about Ahichhatra. About the same time @trueindology tweeted about the archaeological remains in the site. 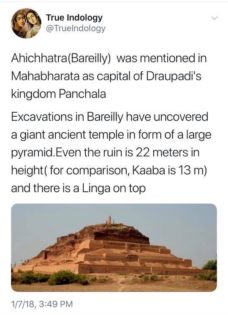 That account got banned due to Twitter’s unfair clampdown on handles that spoke of religious intolerance in history. Later, @trueindology wrote on Ahichhatra on Facebook.

I had no idea that archaeological remains of the ancient city of Ahichhatra still existed! So I seized the opportunity to combine the trip to my friend’s wedding with a journey to the abode of my ancestors.

I didn’t know what I would find. The trail was cold. Would I find people who look like my cousins, uncles and aunts or even me? They might have converted to different religions. After all, this region bore the brunt of brutal invasions. The widely followed Barelvi school of Sunni Islam started from there. I knew I would find apathy, poverty and pockets of mindless modernization. But all I wanted was to offer homage to the home of my ancestors.

As soon as I wrote about my plan to visit Achichhatra on Facebook, there was an outpouring from people wishing me well. What’s more one person called Sandeep Chauhan even offered to take me there! At first, I was hesitant; after all, I had not even interacted with him much on FB. As I conversed with him offline, his sincerity became amply evident. He said his cousin would drive us to the ruins.

Meanwhile, I came across a video uploaded by someone who had visited the place in which he described it as a totally desolate place with no proper road or signage leading to it even though it was supposedly protected by the Archaeological Survey of India (ASI). The uploader even commented that he saw lafangey (roadside Romeos) loitering around the place. That settled it for my husband who decided to become my bodyguard and accompany me.

We flew from Singapore to Delhi and reached Bareilly after a nostalgic day ride in the Indian Railways. There is something overwhelming about a train ride through India’s historic lands. For me, it was not just the history of the places that I passed through but my own personal history of train journeys through the same stations. I sang songs all the way and the husband joined in the refrains.

After a night’s rest in a hotel, we met Sandeep who came with his cousin Vishek. While I had only carried a copy of my book on the educational heritage of ancient India and some chocolates for them, they presented me with two copies of the treatise Ramcharitmanas, one translated into Hindi and one to English. They also gave me a picture of Bharat Maata. I felt touched. I wondered what unseen force was bringing me in contact with such amazing people so dedicated to Sanatana Dharma and Bharata. 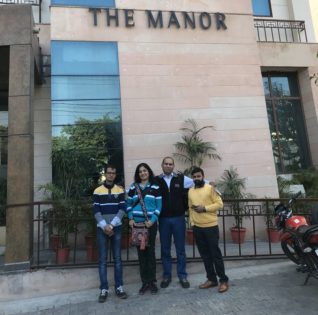 Off we started for Ahichhatra, which was some 70km away from Bareilly. For the first 1.5 hours, the roads were good. When we made a turn into the lane that indicated an ASI excavation, that’s when the drama started. There was no motorable road! It was a muddy path riddled with dangerous potholes. Sandeep kept up our morale with chaupais from Ramcharitmanas. 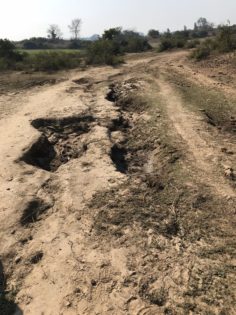 After driving a certain distance, we were literally in the middle of nowhere. There were muddy patches, rocky patches, shrubs and cultivated fields all around in all directions. Where was one supposed to drive? That’s when Sandeep decided to leave us and go for a quick reconnaissance. He climbed atop a nearby plateau to get a good view and came back with solid information about where to proceed. At many places, the path was so treacherous that we all got out to make the car lighter for Vishek to negotiate the way. I was as excited as a little girl.

Finally, we reached the ancient Mandirs, which are called Temple #1 and Temple #2 by ASI and Qila (fort) by everyone in the vicinity. While the first temple had a Shiva-linga like structure on top, the second one did not. But both were geometrical structures with steps leading up. The tread of the steps were so narrow that one would have to climb sideways to place a foot. Once upon a time, these structures were mounds that were noted by Alexander Cunningham in 1862 and later excavated further by several archaeologists in the 1940s and 60s such as A. Ghosh and N.R. Banerjee. In recent times, Dr Bhuvan Vikrama led a fresh round of excavations not far from these temples in 2013. The 2013 trenches were filled up in order to protect them from the destructive effects of weather. 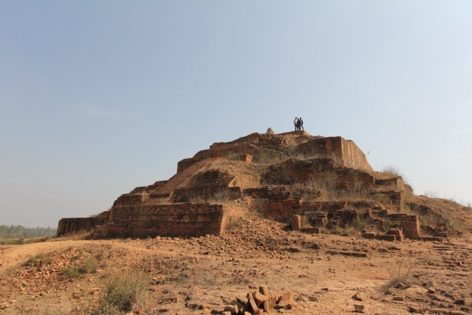 Vishek climbed up the first mandir in no time and gave directions to the rest of us. I slipped and fell at one place, but there was no injury. Perhaps, it was nature’s way of making me touch the soil of my ancestors. When we finally reached the top, there was a feeling of exhilaration. We stood next to the linga and for miles and miles around us, there were only beautiful green fields. The weather was cool and crisp. I felt like the monarch of all I surveyed. But there was also a feeling of sadness; there was graffiti all over the remnants of the linga and it was pathetic that ASI was doing nothing to prevent the crumbling of these monuments. 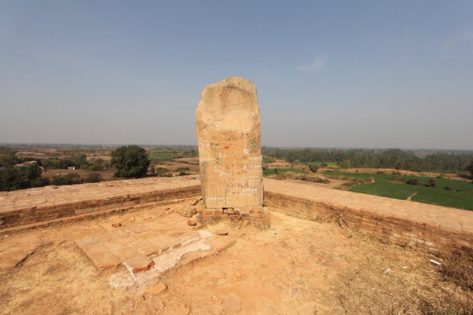 From what I had gathered, the destruction of the temples in the area had been attributed to Muslims. Alexander Cunningham wrote with reference to Temple #1: “The upper portion of the lingam is broken. The people that say it was struck by lightning but from the unshattered state of the large block, I am more disposed to ascribe the fracture to the hammer of the Muhammedans.” Other historians have also mentioned the attacks of Ghiyasuddin Tughlaq and Firoz Shah Tughlaq on Ahichhatra. Bhuvana Vikrama wrote: “Pieces of brutally chipped images of deities lying buried below the suddenly collapsed walls were encountered in a vast area telling the story of the sad death of the city.” 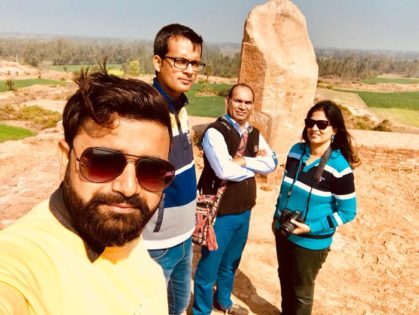 I could not shake off the feeling that I was in the ruins of the ancient Nalanda University, which too had been destroyed by the marauding army of Muhammad bin Bakhtiyar Khalji. There were bricks and bricks everywhere. Could this too have been a temple university town?

Plenty of papers have been written about the extraordinary pieces of art recovered from the excavations at Ahichhatra. These are scattered in different museums. The city has also been mentioned in the Mahabharata which it was a part of the Panchala region. Xuanzang visited it in the 7th century and found nine temples dedicated to Shiva apart from Buddhist and Jain temples.

However, I am astonished that no one has tried to research on Ahichhatra as a centre of knowledge. Why were scholars from this place so much in demand in a place as far-off as Karnataka? It is time to dig into the rich narratives of knowledge transmission within India and outside it. It is also important to create awareness so that the people living close to historical sites have a sense of responsibility towards them. Even today, many people living in Bareilly know nothing about Ahichhatra. 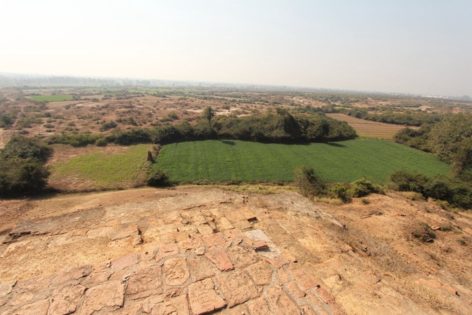 Note: This narrative of mine must not be fed into the Aryan-Dravidian divisive narrative. There has been a tremendous intermingling of people from northern and southern India for thousands of years. My ancestors’ narrative only goes to show that we are all a part of the same Sanatana Dharma that has bestowed great civilizational unity. If anyone has more information about the migration of Shashtikas, please contact me.