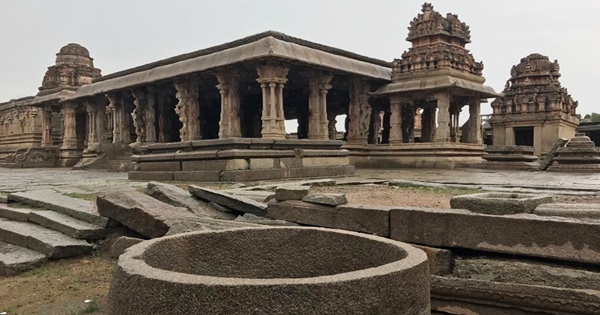 “Amidst numerous ruins in Hampi there are many secrets yet to be decoded.” Every temple in Hampi had a separate market.  Perhaps every market was a specialty. Like modern day malls with exclusive products, Hampi possibly was one big city with numerous markets, each market with specialised products and overlooking each market was a temple. A temple and it’s market was an integral part of Hampi’s social life.

One such large temple was built by Krishnadevaraya after his victory over Utkal (present day Odisha) in 1513 AD. It was called the Krishna Temple and dedicated to Bala Krishna (Infant Krishna).

According to the inscription at the temple site, the idol of Bala Krishna was brought to Hampi from Udaygiri during his Utkal campaign. Krishna temple had a large adjoining market complex with well planned stone paved street for chariots and a large sacred water tank.

This could be the “Krishna market” of Hampi during the 16th century. The Kings and Royals must have frequently visited this temple on their chariots while shopping on their way back home!

This East facing temple has a main shrine of Infant Krishna (the Vigraha has been shifted to Chennai state museum) with Sanctum and a hall of many mythical lion pillars called Yalli. It was built in panchayatana style with two enclosures, a Devi shrine (without Vigraha now) and many sub shrines, a kitchen and a store.

The walls of the temple have many depictions of Royal medallions, Kirtimukhas and many stories, few deciphered others waiting to be decoded.

It’s fascinating to notice how the Royal medallion in Krishna temple intelligently transforms into Vishnu’s Gada from Kumba Kalasam in other temples of Hampi. A closer look is a must to understand this transformation and to raise curiosity!! A large circular granite water vessel sits at one corner, displaying extraordinary skills of Hampi craftsmen.

The eastern gateway has an enormous structure exquisitely carved with many interesting representations. On both sides are depiction of ten avatars of Lord Vishnu entwined in creepers coming down from the top. The ceiling has an intriguing carving of a rabbit inside a red circle (depicting the moon) attacked by two hooded snakes (Rahu and Ketu) illustrating the lunar eclipse or perhaps a different connotation altogether!!

Lizards and Fish carved on the walls for some strange reason could easily raise doubts in some treasure hunters mind! No doubt a lot is yet to be unlocked in this stone world of Hampi even today!!

A little away from these intriguing carvings is a very large granite chest placed under a small pillared stone shed opposite to the temple. The chest is located on one side of the entrance to the market place. This enormous chest is fascinating in its engineering design and could be opened and closed from the top.

The chest is believed to be a donation box with circular and rectangular openings on the top stone and covered with metal lids.  The heavy top stone is cut with precision into two halves and can be slid in opposite direction to open up when the donations are overflowing. Vishnu symbol is carved out prominently on the chest.

On the left is Sudarshana Chakra (Disc or wheel), in the middle is Tilaka or Pundraka (the ritual mark) and on the right is the Shankha (Conch). Also seen is the Sun and Moon which completes Vishnu symbol making the chest holy and revered. What an amazing sight to visualise wealthy merchants and shoppers donating their wealth or grains for the temple during their visit here!

Truly Hampi is enigmatic yet spectacular. Located in a surreal surrounding of gigantic granite boulders, the ruins and standing structures give an unearthly experience. Every site seems to be lacking a detailed and complete explanation.

Every step is mysterious, as you look at the different Royal medallions (Medallion Motif) all over Hampi temples and that extraordinary creature (Vanar with Lion face) on the pillars, your curiosity jumps manifold. What’s the secret of Hampi?? 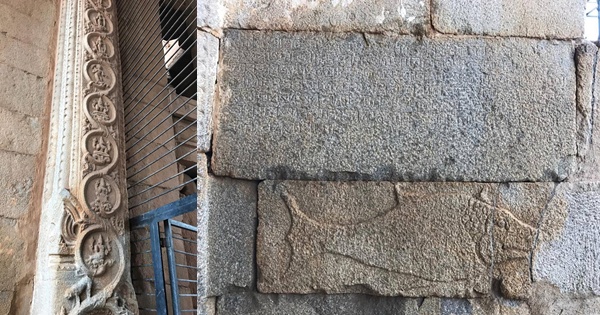