Nehru’s Himalayan Blunders: The Accession of Jammu and Kashmir 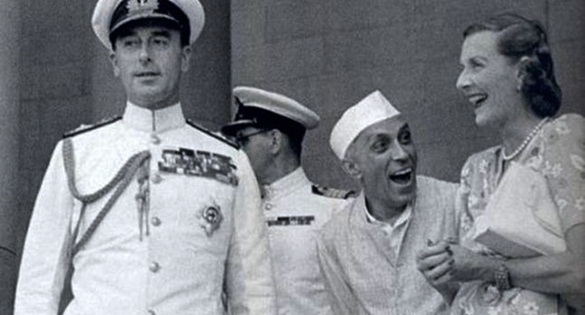 What did Mountbatten actually think of Nehru and Patel? Why did Nehru do such a poor job of defending India’s interests in Jammu and Kashmir including a botched-up reference to the UN and the introduction of Article 370? How was Nehru compromised?

Sardar Patel managed the accession of about 500 states without any lingering dispute. Read about Nehru’s blunders in Jammu and Kashmir—a historical view into what actually happened and Nehru’s short-sightedness which cost India heavily, will leave you stunned.

I always wondered as to why a part of Jammu and Kashmir is still under the occupation of Pakistan. It also surprised me as to why Pakistan is thrusting war on India for Kashmir or sending terrorists to take innocent lives of our countrymen particularly when Maharaja Hari Singh, had acceded the entire state of Jammu and Kashmir to India on October 26, 1947. I thought of delving deep into the historical facts. The comprehensive study of the subject led me to the forced conclusion that Nehru—under the motivated guidance of Mountbatten coupled with his blind faith in Sheikh Abdullah and by ignoring the advice of Sardar Patel—committed numerous blunders in handling the state of Jammu and Kashmir and made generations of this country suffer.

Because of Pakistan’s overtures, Maharaja Hari Singh, sent his PM (designate), Mehr Chand Mahajan on September 19, 1947 to Nehru for offering the accession of Jammu and Kashmir, Nehru preferred the release of Sheikh Abdullah to the acceptance of the accession. It virtually was the biggest blunder of Nehru for which the country was made to suffer forever.

Not only this, Nehru committed blunder after blunder. For example, not giving responsibility of the princely state of Jammu and Kashmir to Sardar Patel as he was the Minister of States Department, Nehru kept it with himself, making of speech on the radio on November 2, 1947, for a plebiscite under the ‘auspices of UNO’ without consulting Sardar Patel, what to speak of Cabinet approval. Nehru was behaving like a dictator. Among other blunders of Nehru were firstly not getting implemented the resolution of UNCIP of August 13, 1948 directing Pakistan to take out their Army, tribesmen and nationals from the territory of Jammu and Kashmir and furthermore imposing of a ceasefire at 11.59 in the night of December 31, 1948, when the Indian Army was on the way to throw out the Pakistani invaders from Jammu and Kashmir. By leaving a strategically important area into the hands of Pakistan, Nehru made the country bleed as thousands of Hindus and Sikhs residing in that area, were massacred by Pakistanis.

It was stated by a soldier that PoK was not made by Pakistan, it was created by Nehru. I think Nehru and Nehru alone is responsible for the Kashmir problem. Therefore this book is directly titled as Nehru’s Himalayan Blunders: The Accession of Jammu and Kashmir. By reading this book the reader would note that not one or two but 16 major blunders were committed by Nehru, that made generations of our country to suffer.

In the words of Lt- Gen LP Sen (Chapter 22 of his book Slender Was the Thread) “It has been a long road from 1947 to 1969, and India has had to face many crises in safeguarding her rights. In the perspective of history, the pity is that these crises were allowed to develop in the first place. Had their genesis in Kashmir in 1947 been dealt with firmly and in time, India could have avoided what has proved to be a very costly legacy.”

It pains me when the mortal remains of our soldiers wrapped in the National Flag, who attain martyrdom while defending the borders of our country, reach the houses of their families. Feeling highly touched by the sacrifices of these soldiers I have decided that the entire amount of royalty received by me from this book would go to the Army Welfare Fund Battle Casualties as my humble contribution to the families of those martyrs who lay down their lives while safeguarding the borders in Jammu and Kashmir from Pakistan. I am solely responsible for authoring this book.

Not only that, this book by Justice S. N. Aggarwal succinctly brings out the number of blunders committed by Jawaharlal Nehru while dealing with the state of Jammu and Kashmir. He just did not follow the advice of Sardar Patel as his interest was in Sheikh Abdullah much more than in India. Nehru’s guide was Mountbatten for obvious reasons. It deprived India of a part of Jammu and Kashmir which is now in the occupation of Pakistan. It also created permanent tension between India and Pakistan.

Nehru received prior information in the first week of October 1947 of Pakistan’s plan of invading the state of Jammu and Kashmir. Nehru proposed consultation and planning, but Sardar Patel responded that nothing less than retaliation was necessary to nip the evil in the bud; Nehru ignored the advice of Sardar Patel.

Sardar Patel’s deft handling of the princely states numbering about 500, including the difficult ones of Junagadh and Hyderabad, is marvelous. Only Jammu and Kashmir was personally handled by Nehru and the country is paying a heavy price by way of loss of precious human lives and a lot of expenditure, because of Nehru’s numerous blunders.

Had Nehru heeded the advice of Sardar Patel and not followed Mountbatten’s, and preferred national interest and not that of Sheikh Abdullah’s, Kashmir could have been saved. It is a pity that the vital strategic areas of Gilgit and northern areas were lost to Pakistan by Nehru’s short vision and are still in illegal occupation of Pakistan (PoK).”

The above piece is an excerpt from Justice SN Aggarwal’s book Nehru’s Himalayan Blunders. 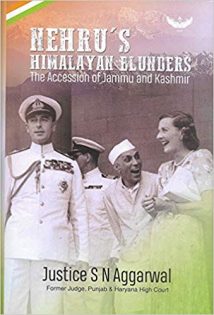 Justice SN Aggarwal joined the Punjab Judicial Service in 1972. He saw various postings in Punjab. Upon selection by the UPSC, he also remained posted as Law Secretary in the Andaman & Nicobar Administration at Port Blair. He got elevated as a Judge, Punjab and Haryana High Court in 2004. Justice Aggarwal belongs to a family of freedom fighters and that infused in him the spirit to write the book ‘The Heroes of Cellular Jail’, documenting the sacrifices of revolutionary patriots who suffered numerous tortures in Cellular Jail in Port Blair for India’s freedom. NCERT adopted this book as a dream project and published it in concise form in 2011 as ‘The Cellular Jail in our Freedom Struggle’ as Supplementary Reading for senior secondary students. Justice Aggarwal has also written five well-received books on law.