Jatayupara Has Giant Footprint of Ram; Jatayu Fought against Ravan Here – An Appeal for Help 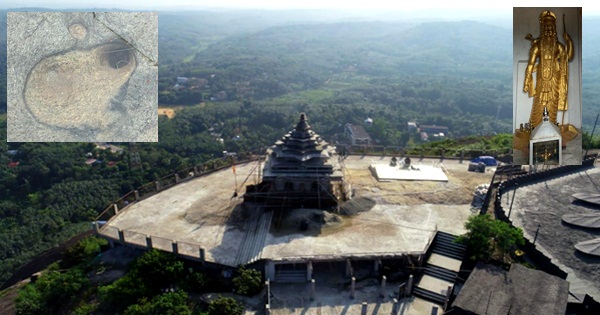 Punyatman! Tucked amidst four hills in the Western Ghats, in the dreamy little village of Chadayamangalam in the Kollam District of Kerala where lies the sacred ‫“‬Jatayupara” -where the heroic bird Jatayu spent his last moments after valiant battle against the demon king Ravan. In a bid to protect the virtuous Sita, Jatayu accosted Ravan as he was enrouteto Lanka. In the fight that ensued, Ravan cut off Jatayu’s left wing and fled. Jatayu would have died here alone, had Sita not blessed him to live until Sri Rama‫’‬s arrival.On meeting Jatayu and hearing what had taken place, Sri Rama blessed him, glad that the veteran avian warrior would finally attained Moksha. 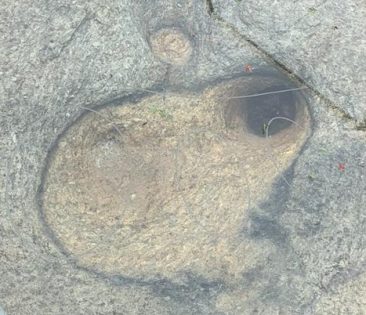 Today, Jatayupara preserves this inspiring episode from the Ramayana with world’s biggest sculpture of a bird; a magnificent sculptural manifestation of Jatayu that attracts and inspires devotees, tourists, and art lovers from across the continent.For devotees, the stellar attraction of the place is the ‫“‬Kodandaramatemple, which was reconsecrated five years back by Swamy Sathyananda Saraswathy.

In 1975, Shri Kummanam Rajasekharan, the former Governor of Mizoram, along with Swamiji took initiative to renovate and rebuild the Ram temple. For decades, the idol of Lord Ram that adorned the sanctum sanctorum was neglected and even vandalised by anti-social elements. This is set to change as the temple occupies the pride of place in the newly refurbished Jatayupara complex. 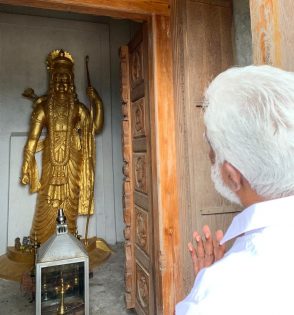 The temple is being reconstructed and the consecration of the new idol as per the tantric rituals will be done in February 2020. The temple is managed by a Charitable Trust – ‫“‬Jatayupara Sree Kodanda Rama Kshetra Trust” and is administered by a Board of Trustees who are presently the local residents who were safeguarding the Statue of Lord Ram. Sri. Kummanam Rajasekharan assumed the responsibility of being the Chief Patron of the Trust as was instructed by his Guru, Swargeeya Swamy Satyananda Saraswathy. Now, he is personally overseeing the developmental activities of the Temple and have plans to develop the area leading to the peak as an International Sree Rama Cultural Centre by the name and style ‫“‬Sree Ram Dham” where it will be a Centre of Excellence for Ramayana Studies.

Most of the present generation are unaware of the fact that Lord Sree Ram was the true icon of National Integration of Bharat. As the ruler in the North, He did travel extensively to the South, visited Sabari at the Sabairmala, the Valmiki Ashram where his sons Luv and Kush were trained, The innumerable Rama Temples at various places in Kerala including those dedicated to his brothers and many places which are named after Mother Sita gives ample support to this fact, even today. The Jatayuppara bears a giant foot – print of Sree Rama, indelibly imprinted in the rock. A perennial spring from where the Bird King Jatayu drank water to keep himself alive to have darshan with his Lord is still seen at the temple premises. 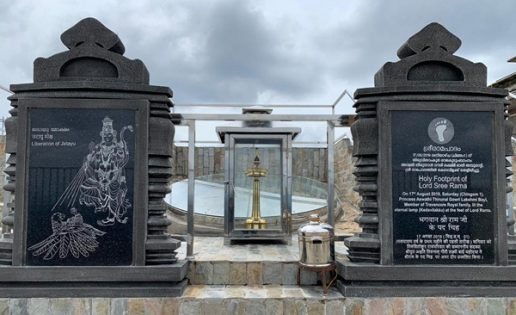 Board at temple site

However, the project lacks financial resources. Delays in funding have stalled its progress. It is imperative that a minimum of five acres of land around the temple is purchased for the required development of the temple and the proposed cultural complex. To achieve this goal, the Temple Trust has devised a scheme to protect the temple with the least cost to supporter’s financial resources. To preserve the temple’s tradition and its cultural heritage, your help will be needed. ‫“‬RAMANU ORU PIDI MANNU”, (A handful of soil for Rama), is the proposed name of the fund-raiser.

Our hope is that like-minded people will contribute a sum of Rs. 500,000/- for one cent of land or multiples of that amount, in numbers large enough to cover the cost of acquiring five acres of land. The Trust has estimated that the total required amount is Rs. 25 crores. There are tens of millions of devotees in India. We implore those who can contribute more to do so.

Contributions may be remitted to the bank account of the Temple Trust exclusively opened for this purpose as per the following details: 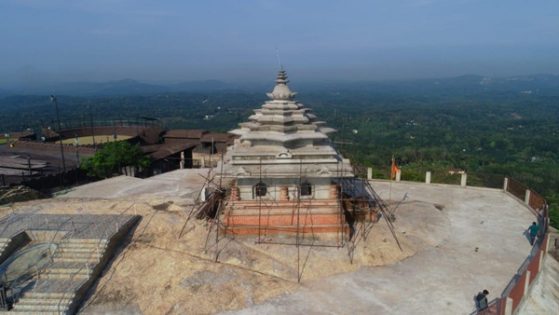 We hope that your generosity will keep alive a scintillating part of the great saga of Ramayana invigorating our cultural legacy which would ignite the minds of succeeding generations of our youth and prompt them to visit the Sri Ram temple with a uniquely marvellous cultural complex around it. With this, India‫’‬s glorious past will be preserved, with its great epics showing the way forward from the past to the present and future.

Disclaimer: My India My Glory is only spreading the word pertaining to the appeal. The emagazine is not associated with the Trust.

Indira’s 1975 Emergency: How RSS Fought for Restoration of Democracy