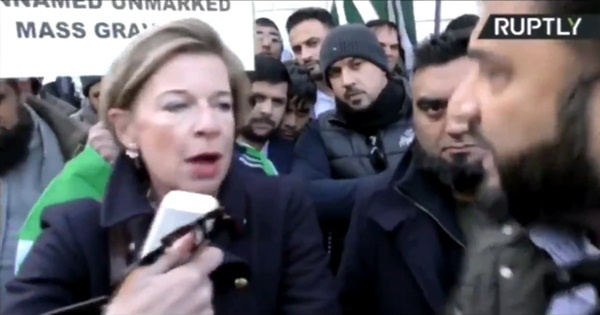 Katie Hopkins spoke on behalf of a people, in this case Indians. She spoke for the rights for people to celebrate their religious festivals without fear. She raised a voice against all fundamentalism, the rabid kind which doesn’t believe in the rights of other religions to celebrate their festival except their own. In this she also showed a mirror to those men who don’t believe in the right of women to be assertive, but believe that women need to wear a black cloak, look through tiny slits around the eyes and their place as being inside homes, she being little more than a chattel who produces children.

The men who had come to protest against alleged Indian hegemony and lack of freedom in Kashmir haven’t grown up with how to answer being confronted by a woman. They experience it as a humiliation beyond words. So, they turn their wrath against Katie Hopkins in the way, the best possible bravery known to them for manhood they are famous for around the world. They encircle her, calling her a ‘whore’ hoping she would be scared or ashamed. After all in their world view it is only a ‘whore’ who appears in public with her head uncovered. It was their bad luck she did not feel ashamed.

We live in the era of ‘victim blaming’. Victims are blamed for almost every violence perpetrated on them. This is more true where the population of migrants is increasing day by day in the name of multiculturalism. Today, what is done to victims is not considered the responsibility of the perpetrator but that of the victim. Katie Hopkins will be blamed for why did she have to go amongst the crowd? As a decent good white woman shouldn’t she have known the beliefs of Pakistani men about women and sat at home? At least she should have worn a culturally appropriate dress and covered her head to not provoke them. Why did she forget it is not her England in which she has grown up and simply walk away? Some of the most common questions raised in an inquiry in case things went wrong and they had lynched her. It is the women who create problems for the men who can’t then control. The same people who once asked why did the ‘tank man’ stood in front of the tanks in Tienanmen Square. If you tell them ‘This is the human spirit that makes the world worth living’, they nod their head and walk away.

Perpetrators in today’s’ world get away if they are on the right side of the narrative that governs the criminal justice system and the political class. They already are. The narrative is written by them, for them and exists to defend them by hired scholars from Capitol Hill to British Parliament. Those who support the abusers of Katie Hopkins have free speech and freedom in India as the next item on the agenda.

The men who abused Katie Hopkins were united by four things. The first was their religion. The second was their hatred for a woman who dared to defy their unity and speak up to them. Can a single woman ever do that? Not used to a woman ever speaking up, their idea of women is a shy, coy and demure creature covered in black cloth from head to toe who only nods her head and doesn’t oppose moves by any man, sorry her master. As one looks at the video circulating on the net, a third factor emerges. It was the one written on their faces that one can tell even without being a psychologist. The men were on a high, an adrenalin flowing and excitement of having encircled a lone white woman, a favorite game otherwise known as ‘taharrush’ that ends up with raping her. Her helplessness is the key, one that is too exciting for them to hold back, like a pack of wolfs on a kill except that it was not. They looked aroused about to achieve the ultimate fantasy, the dream of countless men, the collective subjugation and brutalization in the very heart of the city.

Would these men ever have any shame that they encircled and threatened a single woman? On the contrary, I imagine, they would be going back home considering it as an act of machismo and bravado, sharing and bragging to their families how they harassed a non-believer? Developmentally these men may not have grown up beyond six years who haven’t developed a sense of morality. Would their children be ashamed to see their fathers or grandfathers do this? No, not at all. It is the ‘infidel’ woman after all. Is it then only the ideology that counts? It overrides morality and empathy for others of a different faith? The answer is written in black and white on the wall.

Such men and the groups they form are to be found at all corners of the earth today. They are increasing in numbers. Dressed in almost the same attire and having a similar appearance, they cry discrimination for everything at first. In this case it would be that they were not allowed to speak out their beliefs against an infidel woman. There is another quality here too. The men show that they have no individuality of their own. They can neither think nor act on their own volition without being guided sorry coached by the voice of their priest, by an ideology that separates them from all others, women and children included, lock stock and barrel. They are robots, who don’t have an existence above their navel.

A friend of mine, a Kashmiri Hindu was recently at a rally, silently protesting about the genocide of Kashmiri Hindus on 19th January 1990 in New York. Some men came and shouted obscenities at her telling her what they would do to her if she doesn’t stop her activities. Was she frightened? She thought of the millions of her Kashmiri brothers and sisters who heard slogans from loudspeakers on the night on 19th January 1990 and didn’t change their faith to stay back. It gave her the courage to look them in the eye.

The precursor of all genocide begins with hatred for a particular group and a belief that they don’t have a right to exist, to be and to be heard. The men who abused Katie Hopkins showed just that through their behavior. And they will repeat this behavior ad infinitum till they believe they have succeeded in terrorizing and submitting everyone else to their version of reality.

Katie Hopkins told them how wrong they were in their beliefs. She was in the majority of one against men whose majority failed them. Will the courage of Katie Hopkins arouse Britons to understand how far their society has descended into the hell? I pray it does. There aren’t many left to remind them it seems.

I had one last thought. Should I rename this article as ‘a single brave woman fighting a bunch of cowardly Pakistani men? I decided not to. It is best the reader decides.

Link for author Rajat Mitra’s book ‘The Infidel Next Door’.