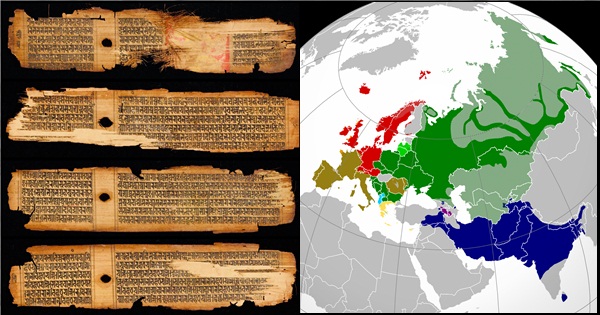 The other day, a reader asked me:

“Wim, how did your migration hypothesis originally begin? You once told me, that it began back in Holland when you were about 13 years old, and that it was when you met your first girlfriend, that your theory’s seed got planted, and that it took at least half a century for it to germinate, to grow and eventually to come to bloom.”

Well yes, indeed! In fact, its seed idea came to me when I was just 13, and an inquisitive Dutch teenager who was at the time learning German in college.

It so happened that in the year 1957, that I – at 13 – enjoyed a one week “teener fling” with an, also13-year-old girl from Germany – Frederika, who with her parents was staying with our family while vacationing in the Netherlands, in our town Delft, the princely city of the painter Johannes Vermeer and Newton’s scientific competitor Antony van Leeuwenhoeck.

Frederika and I went for daily walks into town – Delft, my hometown – me practicing my German and hesitantly trying to avoid holding her hand.

It was on one of those meanderings through our city of canals and bridges, that I noticed something peculiar about her German language, specifically that her pronunciation and articulation was different from the college German that I was learning.

Dutch by the way (my native language), is supposed to be a German offspring, a dialect that had turned into a language…

Hearing Frederika speak though, and noticing how her parents so sloppily (I thought) articulated their native German, I felt that the opposite was just as likely or even true.

In fact, I, the snotty nose whizkid that I must have been, concluded and decided that the German language was without a doubt a dialect of Dutch.

Over time, that “German is a Dutch dialect”, became my standing joke every time I met a German or when the topic came up… one time even in class, to an consternated German language teacher without a sense of humor.
I had to make it a joke, because I could not expect that anyone would take my observation seriously.

This peculiarity – in general characterized by softer consonants and umlauted vowels – made me discover (when I, in 1971, was studying Sri Aurobindo’s writings and slowly learned to read the Bhagavat Gita in Sanskrit), that INDO-European languages had so much in common – especially etymologically – with Sanskrit…

Of course, I HAD to find out how that may have taken place.

(By the way, in 1994 I had a brain injury, and almost totally lost my ability to read Devanagari, learning new languages and doing math. Lately thoughI have made an enormous effort to regain those skills. I can now retain Devanagari for about a month, however, when I stop practicing, I have to pretty well start all over again… (Luckily for math I can use a calculator.)

Anyways, I still have to do 2 hours a day of intense breathing exercises to maintain my brain in good order…)

In whatever way that handicap limited my mental abilities, still, around the year 2000, thinking about coastal European languages and certain local coastal dialects, I had an “Aha” moment, “It must have been through coast-hugging sea voyages and coastal migrations, rather than the (still) consensus theory of a “Eurasian Aryan origin due to overland migrations”, that I figured that an early version of Sanskrit must have been seeded along a number Europe’s coastal areas – in locations where it took a hold, like migrant or mixed migrant / indigenous settlements where, I speculated, that a rudimentary early form of Sanskrit had gradually developed into a variety of dialects that eventually turned into the various current Western languages.

That sudden insight happened at the same time that I became interested in the Harappan Civilization in, what is now India and Pakistan, and came to know about the attempts to interpret its seals’ depictions and the, presumably unsuccessful decipherment and translation attempts of the script as engraved on its terracotta seals and tablets.

At the time of this interest and my own interpretation attempts (successful by the way) of about a dozen seals, I was already quite aware of how reedboats could make trans-oceanic voyages (Thor Heyerdahl).

So, when I found that two Indus Valley Culture tablets featured reedboat engravings, I concluded that my intuition about ancient seafaring, coast-hugging reedboat migrations from the Sapta Sindhu delta westward to Mediterranean and European coastal areas (and, as I found out later, also southward and subsequently eastward) must have been possible.

Of course I went deeper into the then, and still current, but in my opinion flawed migration theories, and found all three of them lacking enough linguistic and genetic evidence that they were solely responsible for the spread of Indo-European languages. from Central Asia into Europe.

Luckily, from about 2010, more genetic data became available, of which I traced a number of mtDNA haplogroups. I found that certain Indus Valley region mtDNA haplogroups also appeared in ancient mtDNA found in quite a number of skeletons from locations in Mediterranean and Northern Europe’s coastal locations.

It was then that I seriously started writing about my inklings, and in 2013 I published them on “academia. edu”.

In 2017, my first paper on this radically new “Holocene Indus Valley Coastal Migrations Hypothesis” got published in Varanasi and was first officially presented in Kolkata’s Indian Indian Museum to a standing room audience.

By the end of 2018, the organizers of the first “Inaugural Conference on Indic Chronology” invited me to come to New Delhi in February to officially present my paper to an academic audience.

Thus, in a nutshell, the history of my Holocene Indus Valley Migration Hypothesis. Link to the research article published at myindiamyglory.com: