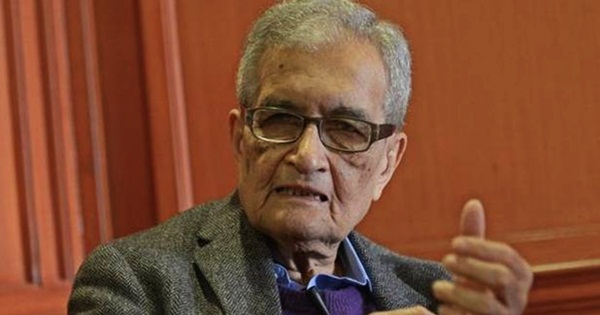 Victor Hugo once famously said, “No army can stop an idea whose time has come.”

Amartya Sen doesn’t seem to have read this quote. Otherwise he would not have made the comment that Modi has won the battle of power only and not that of ideas.

Many years ago, a woman exasperated and impatient with not understanding the speech of a minister in British parliament had said, “Sir, I neither understand your politics nor your mustache.” The minister always ready with wit had answered, “Madam, you will never reach either of them.” Today one feels like saying the same to him, “Mr. Sen, sir, you will never understand either his power or his ideas.”

We read in our school that the idea of ‘Satyagraha’ for Gandhi that gave Indians freedom originated in South Africa, at that time ruled by the Whites. The idea of Congress was also started by Whites who passed it on to their brown counterparts. Nehru went to study in England and developed his ideas of Fabian socialism in its universities, applied its parliamentary system and institutions that established democracy in India. Gandhi’s idea of freedom struggle itself was taken from Thoreau’s philosophy of civil disobedience and therefore, our father of the nation was not a home grown tree. His ideas too were imported, lock, stock and barrel. Whatever the great men of India did, they first learnt it outside, borrowed and perfected it to Indian soil.

The ideas of India that we inherited at the time of independence had everything in it originating outside our shores. We borrowed ideas from outside and owed our identity to those sources. Any original idea had to be traced back to a source outside India, and if not found to be so, imagined and ascribed to a White discovery.

Narendra Modi has become an aberration to this theme. A crack has developed. It was a foregone conclusion that India would be ruled by a certain family and no one else. There lies the difficulty of Amartya Sen and other intellectuals. They have solved it by bracketing Narendra Modi as where he symbolizes power and is without any intellectual ideas. The message is clear. All worthwhile ideas are on the plate of Amartya Sen.

Many years ago, Nelson Mandela created an identity crisis for many intellectuals when he declared that he developed his ideas of democracy and equality from watching his elders in the village council and how they practiced ‘Ubuntu’. That he did not derive the idea of democracy from the West.

With Narendra Modi’s ascendance to power, India is saying the same. The identity crisis for the intellectuals has reached epidemic proportions and is leading to schizophrenia like state. What does the White race say then about their greatness is all about?

So, intellectuals of the world unite. Amartya Sen has called. Listen The New York Times, The Washington Post, The Guardian, The BBC, The CNN, Time and everyone else. Just chill and understand this. You will never have such a challenge again in the history of free thought. The Authors, the poets, the intellectuals bring out your awards given by Rahul baba’s family. Keep them handy and ready to be returned. You will be compensated a hundred times when Rahul baba takes over. No pun intended. But for now, it is your time to show your yearning for free speech and secularism. Cry in one voice for the idea of India being mutilated. Proudly proclaim in one voice that Narendra Damodardas Modi represents power and symbolizes no idea. It will be worth the effort.

So, here we have a teetotaler, a vegetarian, who even spends time like a monk in caves and fasts like a regressive Hindu, who even touches his mother’s feet [shame on him, which world leader ever does that] has been selected a leader of a nation with a majority. A home grown Indian product with not an iota of western residue in sight.

But can one blame the nation for this idea of selecting him? Of course not. They after all have been selecting the family for decades and given me a Bharat Ratna. So, let us call it a mistake, a battle between ideas and power and we seculars will forgive. For the intellectuals it should not be a ‘hara-kiri’ as they defend their citadel.

If Narendra Modi represented no idea and was a dullard, would a genius like Amartya Sen would have written an article about him that too touching every area he claims to have an expertise upon? Is it because he knows that Narendra Modi represents a single idea, the idea being, “Be in the majority of one and walk alone even if no one comes on hearing your voice.”

During the French revolution, the French Queen Marie Antoinette had an idea. When told the people were hungry, she had demanded why the people were not eating more cakes and wondered why enough cakes didn’t reach them. There would be no revolution she had said. The people had another idea and beheaded her.

Some ideas come from empty stomach, Amartya Sen, from the frustration of bread, sorry roti being snatched and your meal being taken away. The Indian people are at that point. Narendra Modi represents that aspiration. This is not an idea that comes in gatherings where wine flows like water, nor in universities that have billions in endowment funds. They originate in the minds of those who run after trains, knowing very well that the next train may be late and one may not earn enough for the day to go on. There is a term for it too. It is called ‘the school of life’ and its unique feature is that it awards no degrees.

My father belonged to the generation. After the independence he stopped dreaming soon enough and never taught me to dream either. He didn’t want me to be disillusioned. He taught me and my sister to survive first, learn to pay the corrupt and remain silent on seeing injustice lest we be killed.

Today, I see the present generation beginning to dream again. It makes me so happy. I don’t want that dream to end this time, be destroyed by forces we could do nothing about. The millions of this generation believe that Narendra Modi is that idea which can stop those forces so that our youth breathe free and dream. I don’t think you will understand that, now or ever. Your economics, justice and theories of famine are abstract concepts, historical forces which can be discuss over expensive wines or in elite universities. But it is also understood and felt in a different way by millions of Indians who go hungry and dream that tomorrow will be better. Narendra Modi represents that India. He has sacrificed his life, his family to put India first, not you.

“Indians are learning to dream, Amartya Sen. Go to any small town or village and know why the young on the verge of starting their lives believe that Narendra Modi is the answer to their hopes. They don’t get shamed anymore by intellectual discourses, by someone telling them what they think is wrong and that they should not dream. You have to understand the language of aspirations for that. I doubt if it exists in your vocabulary.”

Sometime back you wrote a book called ‘The Idea of Justice’. I suggest you re-read it and write one more with the title ‘The Idea to Understand Indian People’. I promise you it will be a worthwhile project for you.