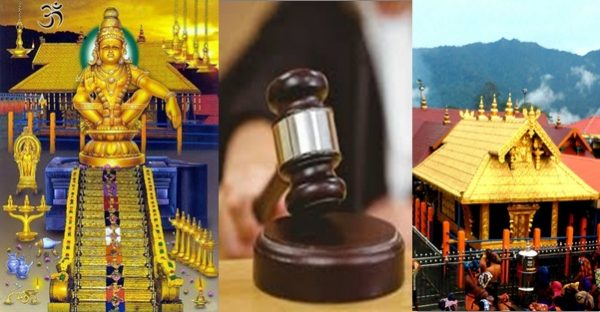 Leave our faith with our Lords!

Your comments made on the issue of ‘woman’s entry into the Ayyappa Temple in Sabarimala in Kerala, during a hearing, has indeed pushed the Hindus into much of thinking. We Hindus forever wonder, why the Hinduism and its followers ‘Hindus’ are always subjected to ridicule and taken indifferently?

Your views only answered in support of a popular jargon that is ‘Gender Equality’. At the outset, the predicament of ‘Gender Equality’ arises only when a community consciously fails to consider its woman on par with the man, spiritually, socially, politically, intuitively and truthfully, right from the beginning. However, Hinduism proudly takes credit for such gender equality’ right from the beginning of life on this Vedic Land.

The first woman who walked on the planet earth was, maybe the ‘Lucy’ from Ethiopia according to the Anthropologists, but the first woman, who took to the brainy debates, participating along with learned men, was a Hindu Vedic woman known as ‘Maitreyi’. The oldest literary ballad the Rig Veda had 10 hymns dedicated to this distinguished woman seer ‘Maitreyi’. This is proof enough that Hinduism never practised Gender bias, but the woman in Hindu Society had only enjoyed all the prerogatives and perquisites on par with the man even in the earliest Vedic society.

The second observation of yours was, in fact, reiterating the popular lingo ‘God has created man and woman equally’. This goes without saying. Hinduism was the pathfinders of this notion, so the Hindu concept of the Arth Nari Easwara the Purusha splitting itself into ‘male’ and ‘female’ forms resulting in the enduring creation. The male part is ‘Shiva’ the female part is ‘Shakti’ (Parvathi), both in combined form is the descent of the creation. This ‘Ardhnarieswara‘ concept was discussed in Brihadaranyaka Upanishad thousands of years ago.

So Hindus need no advocacy in this 21st Century on ‘gender equality’ and similar shams from human judges, any more.

Your perception that Hindu woman was denied entry into this Ayyappa temple, purely because of her gender was a pure delusion. Because, it was the prudent Hindu woman herself had it imposed on self, as a measure of self-restraint not to enter the temple by hurting the Lord himself. This self-exile was purely for the fear of heresy, and for her the devotion to the Lord to comply with the Lord’s wishes. This self-control itself is considered as a homage and reverence paid to the Lord Ayyappa, rather forcibly monetize the ‘entry’ by manipulating the beliefs with twisted use of the ‘Law’ of the land, through a blasphemous verdict that was ultimately articulated by a human judge, much to the dismay of the believers.

The point of this resolution of the woman devotee to obstinate with the Lord Ayyappa’s wish is so powerful, I don’t think any human judge can manipulate to mean this age-old, sacred practice of self-abdication, in an unusual fashion, in order to please the bullying media and envying sections of our society.

The gender bias can be presumed or even affirmed, only, under the only circumstance, if this practice was in place in all the 2 million Hindu temples since Vedic times. It would have been then a serious cause of concern today for the constitution abiding Hindus. But out of 2 million Temples in India, only in a couple of temples, the Hindu woman will never venture into, because they are committed to upholding the sensibility, that is in place and practice.

When this truth is so visible in plain sight, one more equally important aspect, that is, the male devotee’s penance will come for debate too. Ever since a male devotee takes-up the 40 day’s ‘Diksha‘ before visiting Sabarimala, he has to follow a strict course of religious and moral restraints every day.

Once the ‘Diksha‘ is taken, he will hence after get up early, get ready to Pooja, and have dinner with other Swami’s in a commune atmosphere. He has to wear only black robe throughout, walk barefoot, maintain celibacy, keep himself away from non-veg, wine and woman and all such yearnings. He has to complete 40 days of ascetic life before he undertakes the holy sojourn by foot to Sabarimala. He is supposed to carry an ordinary cotton shoulder bag, but certainly not an Aristocrat brand of a Sky Bag. As part of the Diksha he also carries an ‘Irumudi Kettu’ on his head. The concept is very holy and as well, it sends a message of brotherhood too. When dressed in black, all look alike, rich and poor, not knowing who are all in the Q, an Industrialist, an aristocrat brat, a celebrity, or a poor rickshaw puller!

The critical mythological reason behind this restriction of entry for the woman of age between 10 to 50 would be more swaying than to be rubbed aside.

As wished, Lord Ayyappa kills the female demon, while dying a beautiful woman emerges from her body. She informs Ayyappa, that she was cursed to live a demon, and waiting for Ayyappa to liberate her and she asks Ayyappa to marry her. However, Ayyappa refused and says he is going to rest at, Swamy Malai, as a deity to answer his devotee’s prayers. He further said that once Kanni-swami’s stop visiting his shrine he would then marry her. So, she is none other than the Goddess Malikapurathamma, a temple resting nearby Swamimalai. Now devotees also visit this temple after the Darshan of Lord Ayyappa.

There are over 20 lakhs Hindu temples in India, and South India alone accounts for half of it. Entry of woman is restricted only in a couple of temples for exceptional reasons, but not in vogue in all these 2 million temples. If Hindu society is so arrogant enough as you thought of, so as to ban outright the entry of woman in Hindu temples as part of its bigotry (if at all ) only then the sermons on gender equality would arise and can be acceptable, for a debate.

Please do not equate the Hinduism’s liberal and secular values on par with the bigotry of Abrahamic religious ideas. It is also very pertinent to mention here that the all-powerful Christian Missionaries with flowing foreign funds are behind this show. The Missionaries always eyeing on hillocks, mountaintops in India to lodge the Christ statue with Churches around.

In the past in Balaji Tirupathi, the missionaries tried their best to snatch one hill out of 7 hills from Tirupathi during the reign of Congress CM, Christian YSR. Now they are eying on Sabarimala which attracts 3 to 4 crore devotees every year with the contribution touching Rs 240 crores in one single festive season.

I also wonder how the female petitioner who is seeking your order for her entry into the temple can be termed as an Ayyappa devotee when she is so ignorant of the beliefs associated with the very deity! If she claims to be a sincere devotee, then she would not have approached the human courts, but instead, would have prayed the very Lord Ayyappa, at her home, unless this is part of a grand drama of the missionaries to discredit the Hindus internationally.

The irony is, The Lawyers Association head who filed another PIL on this matter was a Muslim by name Naushad Ahmed Khan, president of Indian Young Lawyers’ Association (IYLA).

So, we Hindus are waiting for Goddesses Malikapurathamma, to propose to our Lord Ayyappa for marriage. I don’t think you can set aside this belief of Hindus, and pass a decree hurting our sentiments and challenging our Lord Ayyappa himself.

With the hope, I rest the case, your honour.

Hindu faith is better to be left with the faithful lot themselves.